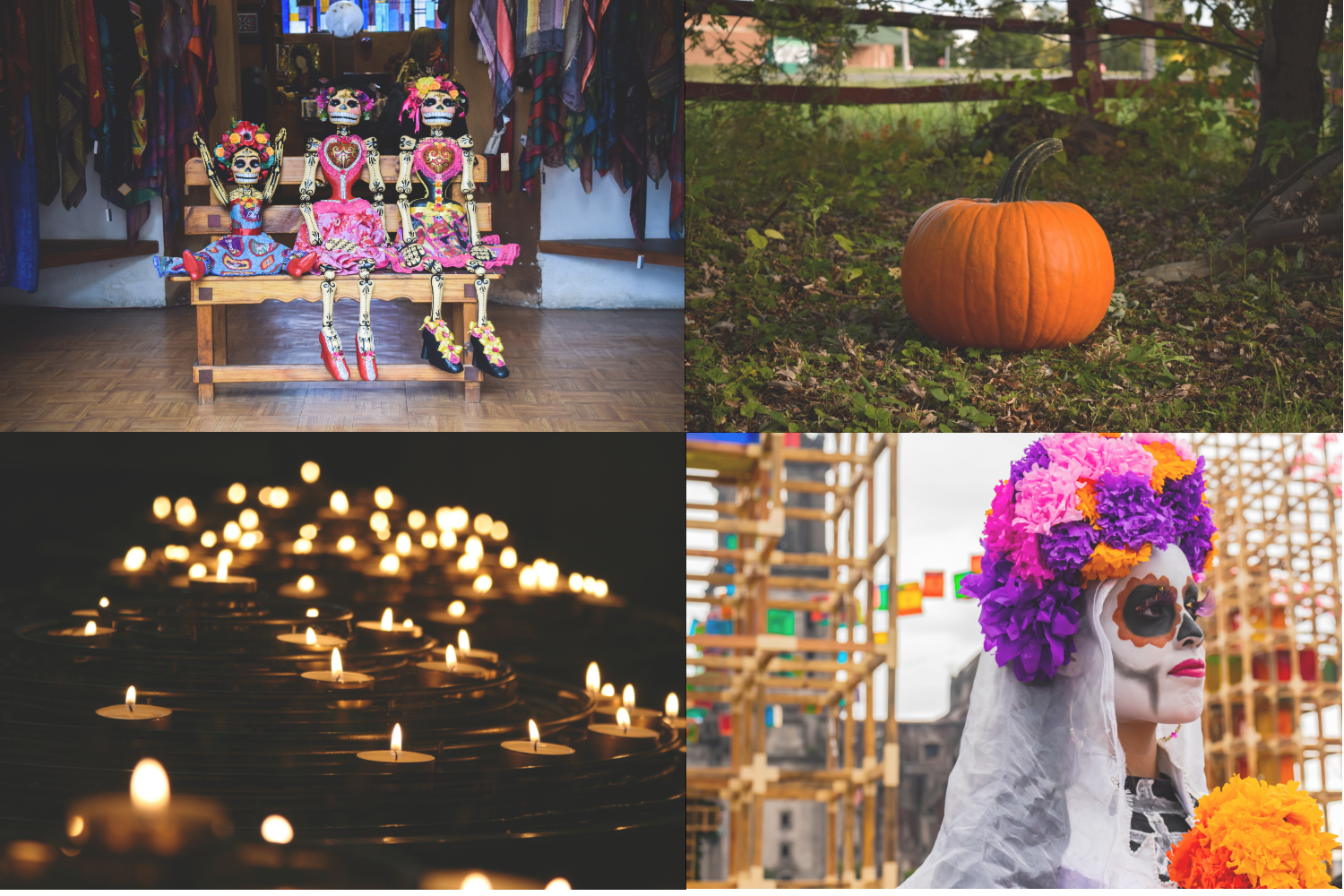 “I was shocked when I heard these stories. I never would have thought my grandparents had such close encounters with things of the sort. I do believe in ghosts, especially when I hear these stories.” said Maya Harrell (A ’20). (Photo Credit: Olivia Martinez/Achona Online/Piktochart)

“I was shocked when I heard these stories. I never would have thought my grandparents had such close encounters with things of the sort. I do believe in ghosts, especially when I hear these stories.” said Maya Harrell (A ’20).

Many Hispanic countries have superstitions and folklore surrounding their traditions and history. Some of the most well-known folklore is based around All Souls’ Day, which is celebrated around the time Americans celebrate Halloween.

Mal de Ojo is the Hispanic belief that an admiring look can lead to bad luck, sickness, or death. Mal de Ojo is said to primarily affect infants and children and is not intentional. Many wear pieces of jewelry with the symbol for Mal de Ojo or hang it in their homes to ward it off. A common cure is to have a santero or a healer pass a raw egg over the person affected and then crack the egg into a bowl of water.

Azabache, or black amber, is believed throughout the Hispanic community to ward off and protect people from evil and fear. Babies and children are given a piece of Azabache on earrings, bracelets, or pins to protect them.

“It is a superstition, and I actually believe in it. My family and I believe that if you wear something red— it can be a red strand— you are protected from mal de ojo. We are firm believers of this for sure,” said Ashley Canal (‘22).

Dia de Los Muertos is a two day holiday celebrated in Mexico on Nov. 1 and 2. It is believed that celebrations and offering encourage souls to visit their loved ones. Midnight on Nov. 1 begins the celebration for the spirits of children. Ofrendas are often made with the child’s favorite snacks, candies, and toys. Midnight on Nov. 2 begins the celebration for the spirits of adults. The ofrendas are usually more adult themed like tequila, pan de muerto, mezcal, pulque, and jars of Atole. At noon begins the celebrations for all souls and spirits and is considered a grand finale to the celebrations. People have painted faces, parades, and decorate graves with marigold flowers, gifts, and sugar skulls with the departed names on them. It is also traditional to clean the graves and restore them to their original color.

Ofrendas, which mean offerings, are a collection of offerings that are dedicated to the souls. Typically, a bright oilcloth is placed on the altar with food or item offerings. Calaveras are skulls that are drawn with smiles as if to laugh at death itself. Sugar skulls, which are often made from sugar or clay, are decorated and put on graves. Marigold Flowers, which are called Flor de Muerto, symbolize beauty and the fragility of life. They are believed to be the pathways that guide the spirits to the ofrendas because their colors and scents attract them.

This holiday is not seen as somber, but rather as a celebration. Skulls are often seen smiling as a friendly gesture to death or even mocking death.

“During Dia de los Muertos we honor our deceased ancestors who are never forgotten. It is a happy celebration where family members deceased and alive can be together as one,” said Spanish teacher Diana Rodriguez.

Those who celebrate this holiday share the belief that “our dead are never dead to us, until we have forgotten them.”

On the Nov. 1 celebration, families often gather at the graves of deceased family and friends like in Mexico. Huesos de Santos, or Bones of the Holy, are pastries that are brought to a loved one’s grave. They are made with marzipan, eggs, and sugar and are then shaped to look like bones. More traditionally, the eggs and sugar are used as the filling, but you can now find them filled with chocolate, coconut, and other sweet ingredients.

Since Galicia has Celtic roots, many of their traditions have Celtic backgrounds. On Oct. 31, Galicia celebrates Noite dos Calacús, or Night of the Pumpkins, where there are a multitude of activities including pumpkin carving, costume parties, bonfires, and even rituals. The quemada is an alcoholic beverage that is made from aguardiente, unground coffee beans, sugar, and lemon or orange rinds. The drink is typically prepared within a pumpkin and consumed after reciting a esconxuro, or a spell.

In northwest Spain, especially in Galicia, there is a belief in the Santa Campaña or the Holy Company. They are called by many different names such as Estadea, Rolda, Patella, Avisons, Pantaruxada, and As da noite. The Santa Compaña is a procession of souls led by a living person that announces the future death of a soul joining the procession. They are said to come to punish people for their wrongdoings and appear around midnight but disappear before the first rays of sunlight. They pass through villages, empty roads, near households, go into fields, and are most likely to be seen on San Juan, which is celebrated from June 23 to the 24, and Dia de Todos los Santos.

The Santa Campaña are said to sing and tell stories and to be filed in two rows wearing shrouds or hoods and walking barefoot. They hold candles in their hands, so people have smelt burning wax while hearing prayers or funerary songs. The leader is said to be someone who belongs to the local church like a parishioner and carries a cross and cauldron. They can pass the cross and cauldron off to another person and make them the leader of the group. It is also said that the leader can be the person whose future death is being announced.

Across all versions of the story, there are symbols that are associated with death rituals such as a cross, a candle, and holy water. In the stories, there are multiple ways to protect yourself from the Santa Campaña. You can draw the Circle of Solomon with either chalk or salt, put a black cat in their path, lie face down on the ground, pray, or simply run.

Many locals have had experiences with the Santa Campaña, including both of my grandparents. When hearing the stories for the first time, I didn’t make all the connections that match the legends. As I researched and wrote about it, I was able to find small details that were similar to the legends.

My grandmother’s story begins with them coming from an excursion and going down to a town called Piñeiros. Since it was raining, they were going to their grandmother’s house to find something to cover themselves with when they saw a light high in the sky. The light was moving down the town and went into a field where people get grass for their animals. The light just stayed there, and they never saw it again, but many people in the town had seen it before.

Another time, my grandmother, her siblings, and her parents were in their backyard when they saw a light in a nearby field. They had seen the light before, but this time it broke into three separate lights. One of the lights stayed in its place, another one went in the direction of another town, while the last one began to approach them. They all ran inside but forgot to close the door behind them. Since they were all so scared, they sent their dad to close the door.

On a separate occasion, while they were in their backyard, they had been able to see a spot called La Raña that always had a mysterious light. After some time had passed, a body appeared in that very spot, and the light went away and never came back.

My grandfather has also had an experience with the Santa Campaña. After a night of fishing, he had to go to a nearby town called El Pindo to sell his sardines. Since there weren’t enough people to carry the sardines to sell them, my grandfather went as well. On the way back, they heard yelling and saw little lights that my grandfather described as candlelight on a side road. Since they were all scared, they stopped walking, and the yelling stopped. They began walking again, and the yelling began once more. Once they finally got away from the area, one of the women said that she had seen the Santa Campaña before and that it was them.

“I loved getting to hear these stories from my grandparents. It’s so interesting to learn about and are especially fun to tell to friends around Halloween. I believe that my grandparents’ stories are true and wish I could see it myself.” said Evelyn Martinez (A ‘18).

In the Catalonia area, they celebrate the castanyada on Nov. 1. The castanyada includes concerts and stalls filled with seasonal food such as catanyes (chestnuts), sweet potatoes, sweet wine, and panellets, which are sweet Catalan cakes made of marzipan and almonds, among other things. In the city cemeteries, they give night tours and have classical music concerts. In Sant Feliu Sasserra, there is a two day witch festival in honor of the twenty-three women accused of witchcraft and sentenced to death during the Inquisition.

In Madrid, there is an event called HalloWANTS, which is an exciting electronic music festival. In the college town Alcalá de Henares, there is a zombie march, which includes drummers and flash mobs.

In the city of Cadiz, there is a tradition called Fiesta de los Mercados. City merchants and vendors use their merchandise to create displays that depict scenes from popular or recent scandals.

Throughout the entire Hispanic community, there are celebrations for All Souls’ Day that are unique to each country. Each tradition is a part of the incredible histories of these countries and deserves to be shared.