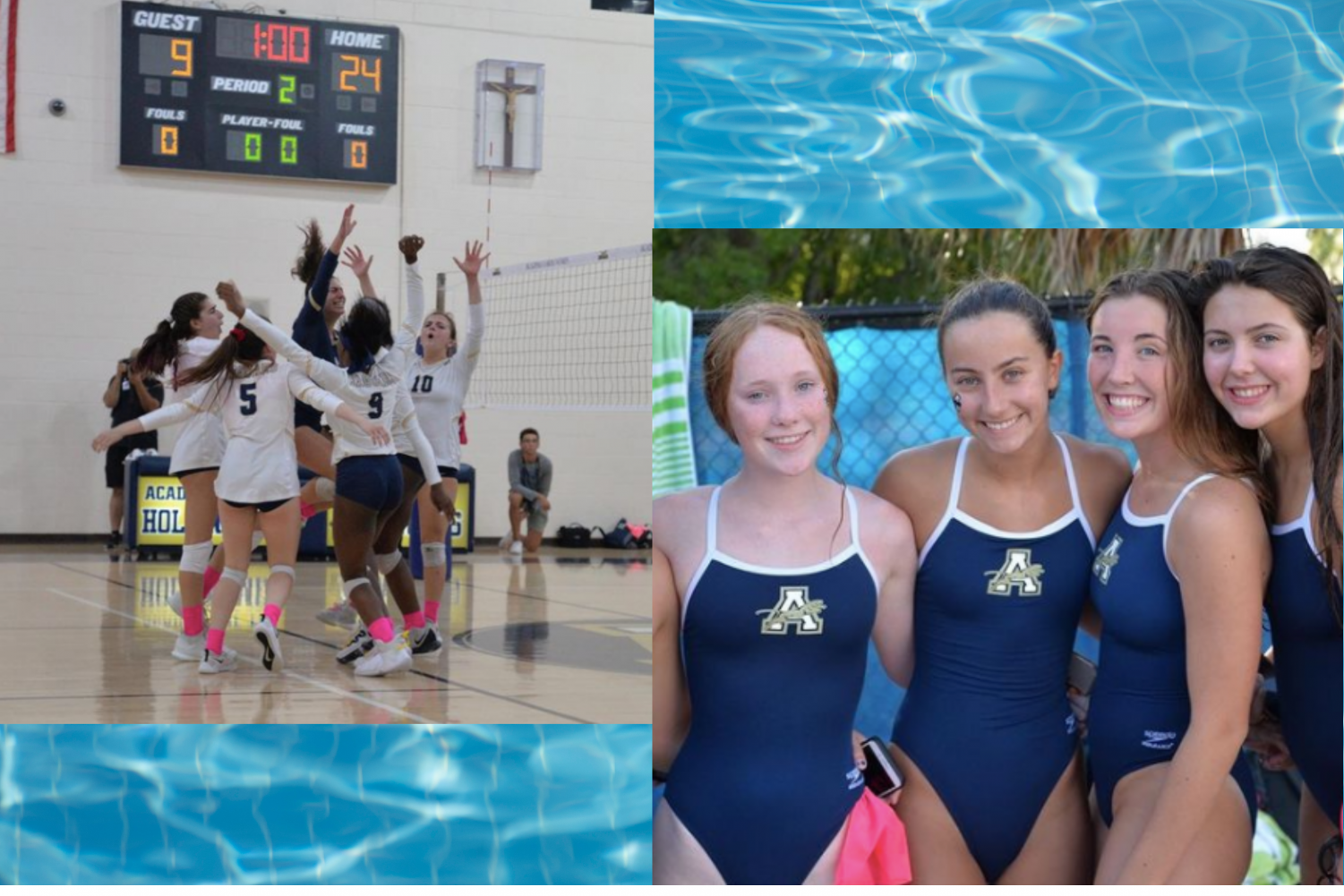 Both the swim and volleyball teams dominated in their respective events of 2019 Spike and Splash. (Photo Credit: Elise Favret/AchonaOnline/Piktochart)

Both the swim and volleyball teams dominated in their respective events of 2019 Spike and Splash.

Spike and Splash is an annual fundraiser that raises money for cancer research through a night consisting of a simultaneous volleyball game and swim meet, large student sections, food, and raffles.

Spike and Splash began in 2006 to help fundraise for breast cancer research in honor of PE teacher and swim coach, Mara Shultz who was diagnosed with the devastating disease. Although Shultz passed away in 2010, Academy continues the tradition in her honor, holding the annual event benefiting Moffitt Cancer Center.

In 2017, the event took on further meaning with the passing of beloved Academy student and exceptionally skilled swimmer Cailin Cannella after her hard-fought battle with osteosarcoma. In the four years since her passing, the event has been in honor of both amazing women and raises money for both breast and pediatric cancer research.

Every year, the event is more successful than the last, with $20,000 being raised in the 2019 event alone. In the thirteen years of Spike and Splash, over $100,000 has been raised for Moffitt Cancer Center and the National Pediatric Cancer Foundation.

Funds are raised via t-shirt sales organized by Academy parents, ticket sales, Dad’s club grilling out by the pool, and Mom’s club bake sales. According to the weekly bulletin sent out by Assistant Principal Erin Krukar, this year’s ticket sales will look a little different. To ensure a safe event, the attendance has been made limited, with tickets being allocated to both Academy students and faculty, and the athletes’ families. Separate tickets will be required to attend the volleyball matches and the swim meet, with each costing $11. The link for student tickets was sent out by Athletic Director Kevin Vargas via email on Sept. 20, where he warned there is a possibility of the event selling out.

This year, Spike and Splash will be held on Thursday, Sept 30, with both sporting events beginning at 6:30 pm. Our swim and dive team will be competing against the formidable Plant High School, while our volleyball team has a game against Tampa Catholic High School.

Swim team member and Spike and Splash veteran Ashlin Cannella (‘24) says, “I am so excited for Spike and Splash. It is so different from every other dual meet and the support from the students really makes the meet more fun. This meet is competitive, but I’m so excited to race Plant.”

Golden Girls, the Academy gold club in charge of all things spirit-related have big plans for the night. Co-Presidents Bella Yepez (‘22) and Sabrina Pedregal (‘22) intend for it to serve as a model for the school excitement they hope to foster this year, especially to the underclassmen who have never attended a true school-spirit event before.

“We are doing posters, t-shirt tosses, a photo booth, a pregame painting station, and a free ice cream from Sage voucher!” says Pedregal. She further explained the set up for the week, saying “Everyone needs to buy their tickets for Thursday, and get excited for the pep rally on Monday, Sept 27. We will also be having a smaller white-out event on that Tuesday.”

The juniors and seniors have expressed their excitement for the night, as it is a step in the return to normalcy they have been craving.

“I’m planning on attending Spike and Splash this year. Since it was cancelled last year, I am extra excited … I am also looking forward to performing at the event one last time.” says Jaguarette Claire Wong (‘22).

Pedregal created the following promotional video to show what Spike and Splash is all about.