Save or Spend? Generic vs. Name Brand Products

Academy students that always go to Starbucks to get their morning coffee and buy makeup from Sephora do not think about other cheaper options very often. Sometimes a generic store brand product is more beneficial or easier to use than the name brand. How often is this the case though? 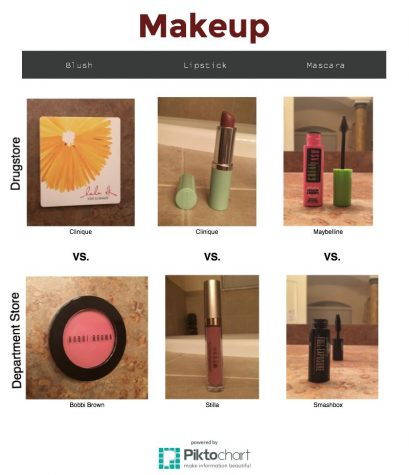 Most people defend themselves when they buy super expensive makeup,claiming that works better, lasts longer, or is easier to use. However, this is not always the case.

For example, every type of blush has the same ingredients as other brands and they last for a long time. Therefore, it makes more sense to go with a drugstore brand especially if it is not something you wear all of the time. The Revlon powder blush is just as effective as the NARS powder blush and it is about $20 cheaper.

On the other hand, high-end brands usually have better quality lipstick than drugstore brands do. They have better pigmentation, last longer during the day, and have more reliable moisturizing ingredients.

There are some types of makeup however, that can be bought from either brand. Mascara is one of them. Both designer and drugstore brand mascaras have great qualities that people look for in mascara such as lengthening and volumizing lashes.

Senior Jhuztin Honrado shares her opinions when deciding where to buy different products. “Personally I would splurge more on lipstick because I wear lipstick the most and department store products usually have the best formula that will stay on all day. I don’t usually wear mascara so I don’t mind wearing drugstore mascaras.”

To some, Coca-Cola is amazing and one of the best drinks on the planet. To others, it is horrible and not worth buying. But how will they think when it is compared to a lesser known brand of cola?

Based on the level of nutrition, Coca-Cola is better for you in that it has 20 less calories, no added sugar, and not too many carbs. Whether or not Coca-Cola taste better than Publix Cola is completely up to the buyer but Coca-Cola can use not only its name recognition but its nutrition facts as well to be a more appealing choice than Publix Cola.

One of the most well-known over-the-counter medicines is Advil but there is a less expensive alternative for it, Ibuprofen. Ibuprofen is the active ingredient in Advil that reduces pain and headaches. Advil’s brand name attracts more people because it is a specific product that people generalize all of the time. Just like every other brand name product, Advil uses its name recognition as an excuse to raise their price. Even though Ibuprofen and Advil have the same effect on the user, it is more beneficial for most people to get ibuprofen because it is less expensive.

The generic brands of most foods like pasta and frozen vegetables taste relatively the same as well-known brands. No matter where it comes from, all types of pasta are prepared the same way. They come out of the box as shells, get put in hot water and turn into noodles. So if you are trying to decide whether to buy Barilla or Great Value, don’t stress about it and just pick one.

Oreos on the other hand, are so original and have such a distinct taste to them that it’s impossible for other companies to replicate them. There is currently a patent on Oreos so only Nabisco has the rights to the iconic recipe. Places like Publix are able to make chocolate sandwich cookies using almost the same ingredients used for Oreos but changing them slightly so they can get the closest flavor without copying it exactly.

Oreos are junior Abigail Rodriguez’s favorite cookie. She states, “They are so much better than the generic stuff. The cream is the best part and no one can top it. I also like when they taste fresh right out of the box.”

A lot of the time when people buy high end products, they are just paying for the name and the fancy packaging when in reality, it has the same quality as a generic brand. That is why it is important to know when to save and when to splurge.