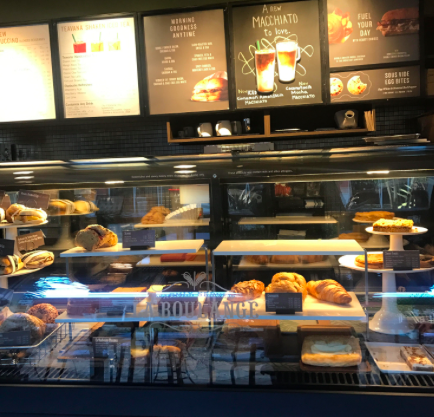 Starbucks has added several unique food and drink options to their menu that are definitely worth the try.

From Sous Vide Egg Bites to espresso ice cream floats, Starbucks has proven that they are not your average coffee chain.

Recently, the company released their Cookie Butter Bars. Although there wasn’t a lot of hype when the cookie bars first came out, they quickly became one of most popular food options on the menu.

Sophomore, Morgan Farrior, said, “I had one the other day and I wasn’t expecting it to be that good, but I really liked it. It is different than anything they have.”

Affogatos, an Italian dessert which involves vanilla ice cream and a shot of espresso on top, is another new treat that is now available at certain Starbucks in California.

Cinnamon Almond Milk Macchiatos and Coconut Milk Mocha Macchiato are Starbucks’ new spring drinks and will be available all season.

“I had a cinnamon almond milk macchiato a couple days after it came out, and I loved it. I like to drink them while I’m studying,” said, sophomore, Blakely Byrd.

The Iced Cinnamon Almondmilk Macchiato is made with espresso, Almondmilk, and cinnamon dolce syrup. It is topped with a caramel cross-hatch and cinnamon.

The Coconut Milk Mocha Macchiato was introduced as an iced drink last summer, but now they’re bringing it back as a hot drink. Espresso shots are poured over coconut milk and combined with white chocolate mocha sauce. The drink is topped with caramel sauce and mocha sauce to make a total of five layers. Both drinks can be served hot or cold, which makes them perfect for Spring.

Sous Vide Egg Bites, which were introduced in January, are another healthy breakfast option at Starbucks. They come in two flavors: Bacon and Gruyere and Egg White with roasted pepper. These egg bites resembel frittatas, but are easy to eat on the go and are a great option for busy mornings.

Senior, Julia Petrillo, said, “Someone made me try the egg bites, but I actually really liked them and I like how they are easy to pick up before I drive to school.”