Speech and Debate Club Competes at 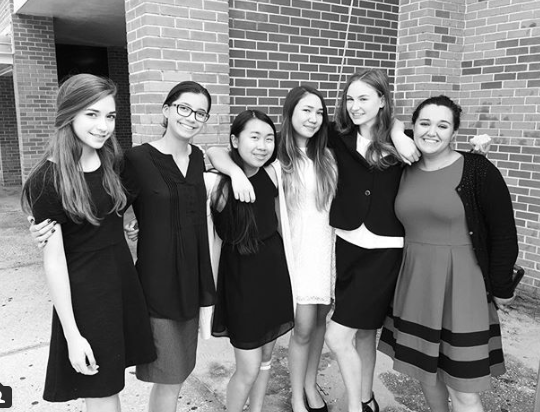 Tress Jacobs (‘20) says, “I like speech and debate because of how important it makes you feel when everyone is dressed in their formal attire the day of the competition.” Photo Credit: Isabella Salgado (used with permission)

Four members of AHN’s Speech and Debate club competed at their third competition. The Florida Gulf Coast Catholic Forensics Language (FGCCFL) Speech and Debate Tournament was held at Newsome High School on Dec. 2, 2017. Competitions are a chance to meet new people from other high schools around the area.

Isabella Salgado (‘20) says, “I like being able to meet unique people from all over the world, and how passionate they are about their pieces and how their pieces reflect their life.”

President of the Speech and Debate team, Hira Khan (’19), placed 2nd in Extemporaneous Speaking. She addressed the following questions: “Why was U.S. media coverage of the Sinai mosque attack so sparse?”, “If Roy Moore wins the Senate race, will the Senate expel him?”, “Has 2017’s economic growth been sustained by the promise of tax cuts?”, and “What is causing the Millennial ‘baby bust’?”

The purpose of the Speech and Debate team is to compete in tournaments and oratorical contests in order to learn and gain confidence in public speaking. At competitions students can choose to perform several different categories such as; interpretations, debates, and contests.

In the interpretation category, students are able to perform: Poetry and Prose, Dramatic, Humorous or duo Performance, Declamation, Extemporaneous speaking, and Original Oratory.

Sydney Lowman (‘19) says, “I competed in Original Oratory and I like it because you get to write your own speeches that show your character.”

The next FGCCFL competition will be held on Jan. 20, 2018 at Dixie Hollins High School.