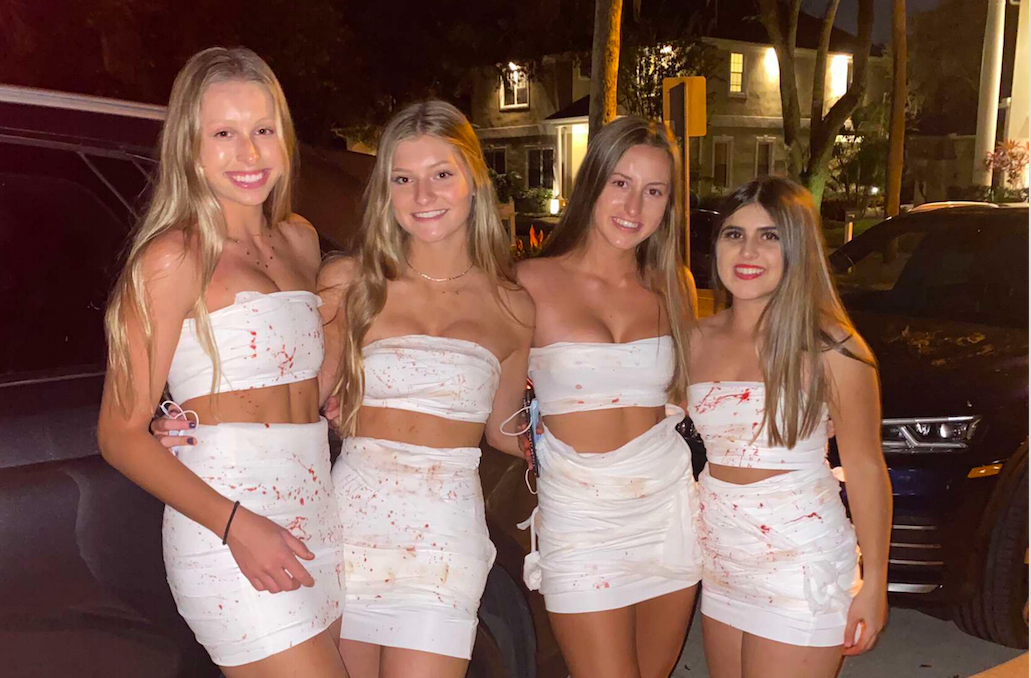 Dressing Up to Stay Inside on Halloween

Due to COVID-9, this halloween looked very different from previous years. However, many people still found a way to  celebrate the holiday.

Every year the trending costumes change based on what is going on in society and what is popular. For the past few years, instead of buying costumes from Party City or ordering a set, coming up with a concept and making a “DIY” costume or putting pieces together from different stores has become very popular. Although many costumes had the same concept, everyone put their own unique idea into their costume. Tik Tok brought about a ton of halloween costumes, due to people making videos showing their previous costumes, or costumes that would be cute.

The angel and the devil were  very popular this year; both ideas seem to be a common costume that will never go away. Academy girls Samantha D”Onofrio (‘23), Chase Cordoves (‘21), Isabella Alvarodiaz (‘21), Maddie Hines (‘23), Olivia Lucas (‘23), Olivia Book (‘23) and Alana Young (‘23) are some examples of those who went as either a  devil or an angel.

Maddie Hines (‘23) said, “Olivia and I decided to be the angel and the devil because we thought it was cute and somewhat matched our personalities for our friendship.”

The idea of a space cowgirl or regular cowgirl were both very popular this year. A space cowgirl was a costume mixing two completely different ideas and putting them together. Academy girls, Zeta Bennett (‘21), Ella Fernandez(‘23), Gianna Lanese (‘23), and Alexa Groteke (‘21) were some examples of those who went as a cowgirl.

Kate Cohen (‘21) said, “My friend Amelia and I were struggling to find an outfit so we just thought the easiest thing to do would be to be a cat and buy black clothing and cat ears.”

Maya Judd (‘22) said, “My boyfriend and I were cop and inmate. It was super cute. We dressed up and took pictures and had a good time.”

Dressing up as an army member was also very common this year. These costumes differed from ordering an army set online to just wearing green or camouflage. Academy girls, Abby Hamilton (‘23), Lily Castellano (‘23) and Faith Joaquin(‘21) are some examples of those who went as an army member.

Carolina Housel (‘22) said “My friends and I dressed up as mummies. We thought it would be super cute. We made our costumes by wrapping gauze over a white skirt and white top and put fake blood and powder.”

Due to the Lighting winning the Stanley Cup, many couples all around Tampa went as a hockey player and the Stanley cup.

Dressing up as a Bratz doll was also an idea that came from Tik Tok. Academy girls Elizabeth Menendez (‘22), Alaina Garcia (‘22), and Niliyah Coney (‘21) all went as a Bratz Doll.

Barbie, an idea from Tik Tok and Pinterest was very frequently used this year. The idea of a Barbie was brought back this year and not just the blonde Barbie but for all hair colors and styles. Academy girls, Kinsley Warbritton (‘23) and Alexa Rios (‘21) are some examples of girls who went as Barbie dolls.

Celebrities such as Kylie Jenner, also used the barbie idea. In 2016, Hayley Bieber and Beyonce also dressed up as Barbie. Although Halloween looked very different this year, almost everyone found some way to dress up and celebrate. The new trending costumes were commonly made by the individual person themselves. Tik Tok and Pinterest were very helpful when finding costumes this year. Many traditional costumes were around with the same concept but had a new 2020 unique spin on them.