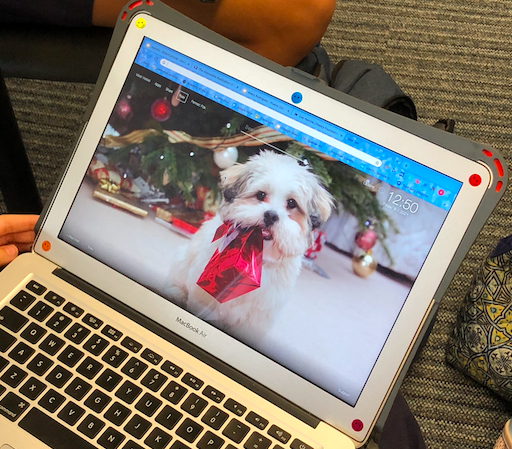 Many students choose to cover their cameras with stickers, as seen on Avery Rodriguez’s (’23) school MacBook.

At AHN, it is not uncommon to see a MacBook camera covered. There are not as many being covered anymore because of the rise in virtual learning and having to be on camera, but some students still have these covers.

One of the main reasons is privacy concerns. With the rise of the digital age, stories of hackers and privacy invasions via technology are becoming more common. Now, such privacy invasions are almost commonplace, with websites suggesting users use strong passwords to prevent any hackers from obtaining information. The hacking concerns have even spread to cameras, with some laptop users covering their cameras because of a fear a hacker may be lurking on the other side.

“I can understand why somebody would want to cover their camera as a means of privacy. I myself keep it turned off for those reasons exactly. I feel there is so much we don’t know and I would rather take the precaution to keep my privacy than run the risk of someone invading my personal space,” said English Teacher Sara Moses.

While technology has improved to try and prevent these camera hacks, they can still happen even with extra security measures. There was a study done in 2013 that showed that the camera could be hacked into without the green light indicator turning on. Federal court records also show that the FBI does know how to hack into laptop cameras. The director of the FBI even covers his laptop camera, as mentioned in this Guardian article.

Cameras being more present in our lives also contributes to this fear of someone watching. In 2019, the LeMay family residing in Mississippi installed a Ring security camera in their daughters’ room to keep an eye on them while they were playing. In December that year, a man hacked into the camera and began talking to the little girl, claiming he was Santa Claus. The girl’s mother, Ashley LeMay, was concerned that the hacker could have seen the girls sleeping or changing clothes.

This is not the first time an incident of the sort has happened, with multiple families reporting a privacy breach via security cameras. These privacy breaches are a main factor in AHN students covering their cameras. Teenagers like to have a bit of privacy, and the thought of anyone being able to look through the camera is definitely a privacy invasion.

Speaking from personal experience, when I was in middle school at AHN, I heard other students saying that the school administrators could hack into our cameras and watch us during class or at home to make sure we were not doing anything like watching Netflix on our school computers. Hearing this made me cover up my camera and mic through the rest of middle school. Early on in my freshman year I heard the same thing about administrators being able to see us through our cameras, and so I always kept mine covered.

“The cameras in the school are on an internal network and the only person who can see is the security at the front. None of the students’ cameras are being looked at and cannot be accessed,” said Technology Support Specialist Nick Martin.

These concerns can be seen among many other AHN students, as having privacy is sacred to younger demographics; the idea of being watched makes people want to cover the camera. Although it is unlikely, being spied on by the government at any time is also a concern.

“I just have one on my computer because over the summer the green light was turned on and I couldn’t figure out why,” said Amelia Vitello (‘23).

As a common theme with teenagers, memes have been made to commemorate the possibility of the government spying through cameras. The recurring “FBI agent watching me” joke can be found with a simple Google search. The presence of these memes show that lots of people online, not just AHN students, believe that someone could be watching through their camera.

“I [covered my camera] because I thought it was cute and thought someone could be there,” said Avery Rodriguez (’23).

During the age of technology, cameras are everywhere; they’re present in our phones to laptops, so naturally there is fear regarding the unknown possibilities presented by the cameras. As technology continues to improve, the possibility of a privacy breach will never go away, and so there will always be people keeping their camera covered. The same can be said about Academy students, since technology is engrained in the curriculum. While some people think covering cameras is meaningless, it is the only un-hackable way to prevent a privacy breach.