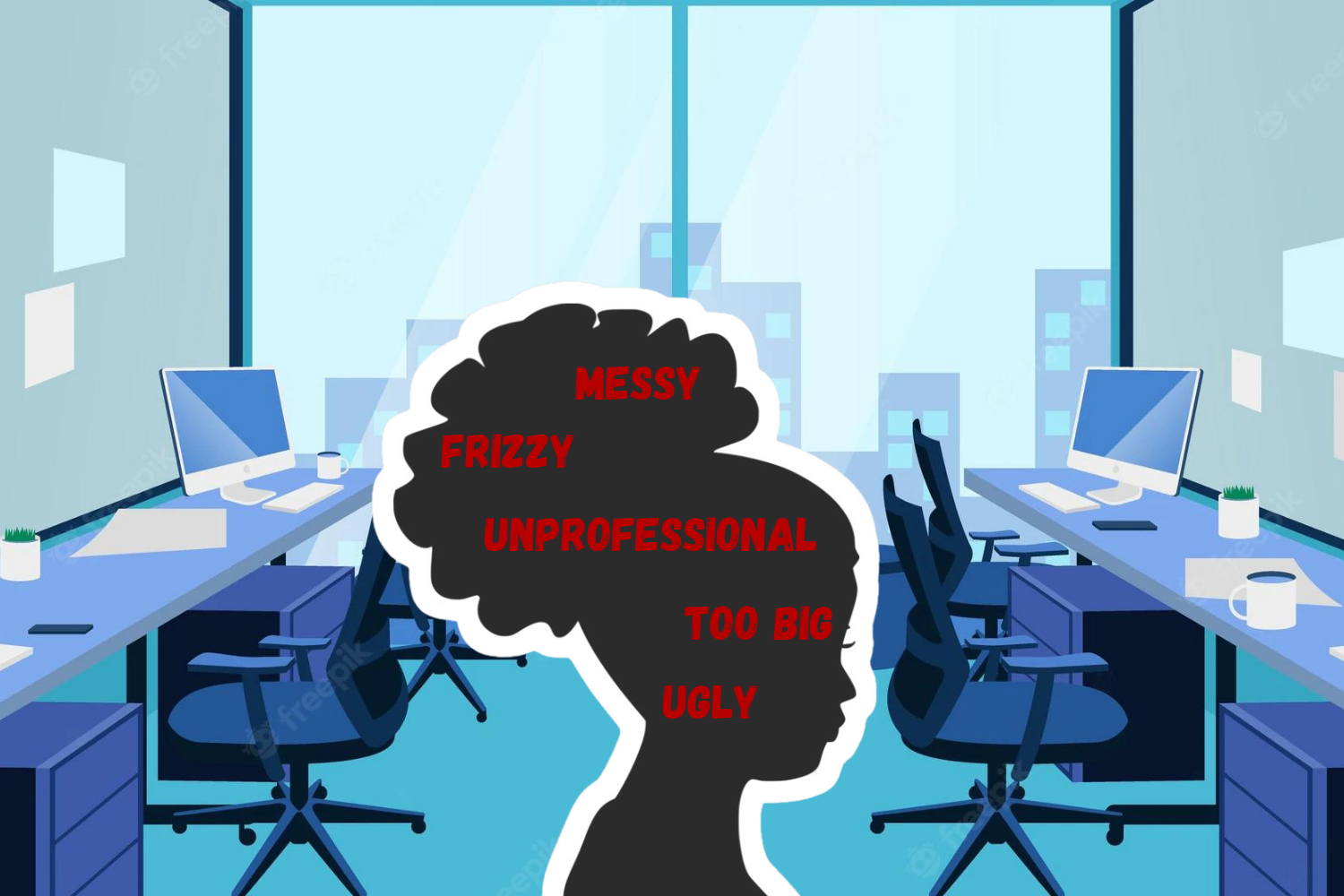 Black curly hair has been looked down upon in professional spaces for being too “unruly” or “distracting.” (Photo Credit: Olivia Payne/Canva)

Black curly hair has been looked down upon in professional spaces for being too “unruly” or “distracting.”

It’s too big. It’s too frizzy. It doesn’t lay down “normally” like it’s supposed to. Everybody else thinks it’s ugly. My life would be better if I didn’t have it. This is how I used to think about my hair.

Black hair has been looked down upon in professional spaces for years, with styles like locs or afros often called “messy” or “unprofessional”. This not only affects black women in business spaces but also students. I wore my natural curly hair down for the first time ever this past Easter Sunday. I wasn’t sure why I had never worn my hair down. But the more I think about it, the more I realize that I was never allowed to, nor did I feel comfortable doing so.

My middle school didn’t technically allow me to wear my hair down. While I probably could have, it was looked down upon. I recall a day where a  black seventh grader was reprimanded for having her hair look “too messy and distracting.” She was one of the very few black female students who wore her naturally curly hair down.

“The reason why I’m fighting for the CROWN Act is so nobody has to be discriminated against. And nobody can tell them how they should wear their hair.” – D’Angelia McMillan of Louisville, who has pushed for a Kentucky CROWN Act, in the ⁦@nytimes⁩ https://t.co/RfpIkpxkWi

The Academy handbook states, “Students must have a natural hair color (i.e. black, brunette, auburn, blonde) set in a style that is not distracting.” Many schools take the phrase “distracting” and apply it to natural or protective styles. Voluminous hair, as most black hair is, can take up a lot space. Just because of its nature, many people call black hair messy. When “neat” hair is thought of, it is usually a slicked back ponytail or straight, non-frizzy hair. These thoughts in our society continue to perpetuate the ideas that curly hair is not neat and, therefore, can be distracting.

Mykhia Pursley (’23) said, “Before I shaved my hair, I always had big frizzy curls that I felt obligated when coming to school to fix into some type of hairstyle. As I always deemed appearance important when being professional, I found it even more damaging when I shaved my head and felt like I was not attired appropriately. As the CROWN act is an important law that I believe needs to passed for every state in America, I feel as if our hair should not be categorized as something not professional because it sticks out or is “abnormal” to people without curly hair… also, I wasn’t forced to put my hair into hairstyles, I personally felt obligated to because having “nappy and unkempt hair” was considered unprofessional.”

To adjust to these rules, I tried to find the hairstyle that best suited my hair while keeping it pretty unnoticeable. I ended up with my “poof,” or a basic ponytail. I’ve been wearing this poof for years. It’s a comfort hairstyle at this point. Anything else seems too extravagant or ugly. A bun makes me look uptight. Wearing it down was never really an option.

In middle school, I knew that if I wore my hair down, I would attract more attention to myself. I would frame my face and take up more space. People would talk about how crazy I looked. The boys would make fun of me. I was very self-conscious and tried to attract the least amount of attention possible. One day, I wore French braids to school and one of the boys remarked that I looked like a moose. I never wore French braids to school again. People’s small comments, eyes, and compliments all forced me, somewhat subconsciously, to change my relationship with my hair. As time went on, the more and more I disliked my hair.

“There were actually a couple instances where a student has touched my hair without permission in freshman year, and it made me pretty uncomfortable. Also, I feel judged here when my hair is not “done,” despite people with different hair textures can rock a messy bun without a problem,” said Kyla Monts (’23).

Black hair is very different from others, as it needs different styles and can’t be put up or straightened all the time. Straightening curls, as well as wearing them up all the time, is very harmful to the curls’ health. Protective styles, such as bantu knots or braids, protect the curls’ health. Our hair shouldn’t have to be damaged because other people may find the styles unappealing.

They wasted NO time: The Louisiana Senate unanimously shot down legislation that protected students and workers from discrimination based on their natural or protective hairstyles. https://t.co/EVWsNgWDkr

I’ve always been aware of the way professional spaces look down upon black hair. I was always sure that I would fight against this norm. It infuriated me to see that seventh grader scolded for wearing her natural curls down. However, I have truly been no better than those people who complimented me when I straightened my hair. I’ve idealized straight hair into something that would make my life ten times better. I’m often irritated by the amount of work I have to put into my hair. I cursed my hair for the way it couldn’t easily change into different hairstyles like straight hair could.

Being a dancer only accentuated these struggles. Competition and performance hairstyles never allow any leeway for tight curls. I would have to straighten my hair every weekend during competition season. It was a struggle that nobody else on my team faced. I hated the hours of sitting, scared of getting burnt by straightening iron.

It honestly sticks out to me the most when people compliment my hair right after I’ve straightened it. It never really feels like a compliment. I conformed to classical beauty standards by straightening my hair, and everyone seemed to love it.

I never fully realized until now that these examples and rules have shaped my complex relationship with my natural hair. In the past, I used to loathe it and want to get rid of it.

However, one moment in my first weeks at Academy that has stuck with me is a compliment one of my friends gave me. We were talking about hair and I casually suggested that my hair was unruly and messy. My friend stated, “No, your curls are really pretty.” This was the first time someone outside of my family had complimented my natural hair. People have complimented my hair before, but never when it was curly. This caused me to realize that everyone doesn’t see my hair as messy, which I had thought before.

Now, I’ve grown to realize that my hair is beautiful, not a hassle. No matter what growth I’ve gone through, professional workspaces continue to look down upon black hair. It isn’t messy. It’s voluminous and big, and that makes it beautiful. I’m proud to have my hair, and it’s a part of who I am. I liked wearing it down this Easter, and I think I’ll do it again.