5 Celebrities Who Opened Up About Fame 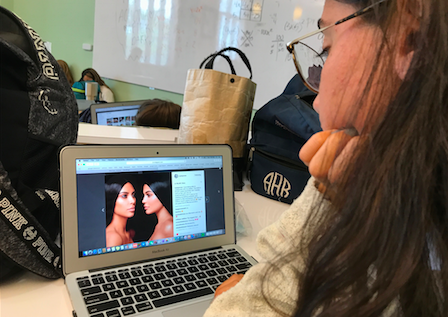 (Credit: Achona Online/Jessica Zakhary) Senior Kendall Perez says, “Fame seems like a good idea because of all of the free designer clothes and perks, but I know the invasion of privacy would really bother me.”

From extravagant vacations and wardrobes to glamorous movie premieres and parties, celebrities seem to have it all.  However, not all celebrities enjoy the fame and attention that comes with their work. Some stars have opened up about fame and their appreciation or disgust with it.

World-famous singer, Justin Bieber has grown up in the public eye, resulting in a series of outbursts that have been less than flattering. He has been open with the toll on his health that comes with the extreme attention.

Bieber says, “[I get depressed] all the time. And I feel isolated. You’re in your hotel room and there are fans all around, paparazzi following you everywhere, and it gets intense. When you can’t go anywhere or do anything alone you get depressed … I wouldn’t wish this upon anyone.”

Lawrence, a famous actress known best for her lead role in the Hunger Games franchise, has been open with the lack of privacy and normalcy in her life.

She says, “If I were just your average 23-year-old girl, and I called the police to say that there were strange men sleeping on my lawn and following me to Starbucks, they would leap into action, but because I am a famous person, well, sorry, ma’am, there’s nothing we can do. I am just not OK with it. I am just a normal girl and a human being, and I haven’t been in this long enough to feel like this is my new normal. I’m not going to find peace with it.”

Depp could be expected to be used to fame, noting his many years in the industry, but he has been outspoken about fame being like “living as a fugitive.”

no Johnny Depp has always been made and mega famous always. He's always been a star. Captain Jack is legendary but so's Johnny

Acting since the 90’s, Smith is no stranger to the spotlight. He even admits to his “love” of being famous.

Smith says, “I want people to recognize me,” he said laughing. “I’ve met a lot of people where fame can be a burden, and I just love it.”

Cyrus, a former Disney star has struggled to adjust to fame in the past and opened up about how she copes with it rather than her opinions.

Cyrus says, “I created my surroundings, my own world. What seems like fantasy or trippy, it’s not to me. It’s my actual reality.”