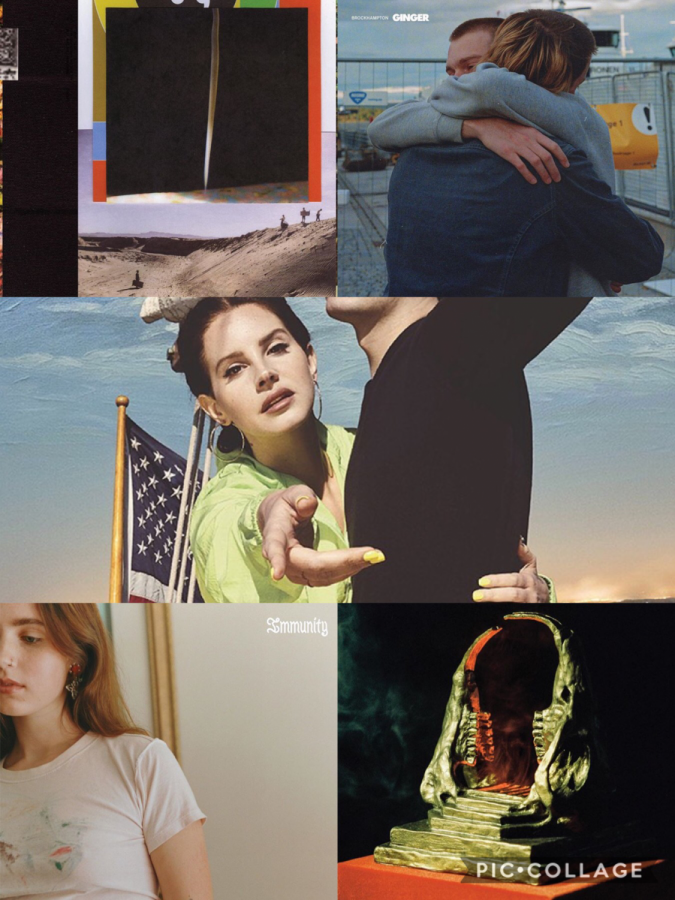 “[We were] fighting with each other, crying,” said Kevin Abstract on the topic of the Ginger cover art in an interview with Genius. “And, at the end of the night… It ended with us hugging each other, and it was Joba and Weston, just hugging.”

Music of the Month: August

The month of August has graced us with many musical masterpieces from the creative minds of artists such as self-taught electropop Clairo and the self-titled boyband Brockhampton. Here’s a further look into some of this month’s top albums, and a playlist featuring the albums’ highlights.

Brockhampton is a self-titled boyband and rap collective started in San Marcos, Texas and currently based in California. The group met on a Kanye West fan forum and was pioneered by Kevin Abstract. The powerhouse collective consists of vocalists, producers, graphic designers, and web designers: each creative aspect of the group is highlighted.

“Ginger” is their fifth album released under the record label Question Everything/RCA, with features such as Slowthai, Deb Never, and Ryan Beatty.

The album as a whole, and Brockhampton in general, is defined by their use of voice pitching, catchy hooks, and unique song arrangements. General themes seen throughout the album are those of friendship and growth.  Simply: “Ginger” sounds like a group therapy session and feels like a long hug from an old friend. The record, while sounding a bit cramped at times, contains a myriad of unique beats and performance styles. Similar to the majority of Brockhamptons’ discography, the album evokes a chaotic yet nice one-for-all energy.

Clairo is a singer songwriter from Massachusetts who produces her own unique lo-fi bedroom pop sound. Clairo’s sound is inspired by 1980’s music and dreamy tones that she channels into her music, using minimal resources such as her guitar and a miniature keyboard. Standout songs have gotten her popular such as “Flamin’ Hot Cheetos” and “Pretty Girl”.

On August 2, Clairo’s first album, “Immunity” was released with the label Fader, stirring up much excitement from all corners of the internet. However, there was one word on my mind for the duration of my listen that could be used to describe the album: bland. Many were excited to see what Clairo’s first album would entail, as she was one of the major pioneers of the DIY, dreamy, reverb-heavy bedroom pop movement- yet “Immunity” did not meet expectations.

Despite the albums’ general blandness, Clairo pivoted slightly away from her trademark bedroom pop sound and focused a bit more on soft rock and breezy beats, which she dispersed around lush melodies. Many tracks feature gentle choirs and even slightly 808s And Heartbreak style autotune. The album’s production, while at times on the brink of collapsing into mush, is notable because it contains all the essential features of bedroom pop with Clairo’s own unique twist.

King Gizzard & the Lizard Wizard are an Australian rock band from Melbourne with a lengthy discography of two EPs and fifteen studio albums since 2010. King Gizzard initially adopted a unique sonic blend of surf music and garage rock, but have since expanded their sound and drawn inspiration from other influences, most notably psychedelic rock, folk, and heavy metal.

“Infest the Rats’ Nest” was released August 16 via Flightless and ATO Records, diving deeper into heavy metal, specifically thrash metal, than any of their previous records. Considering King Gizzards’ usual eclectic nature of sound blending and juxtaposition, this album is relatively concise as one general theme overarches the entire record: society’s utter ignorance- or simply, denial- of climate change. The albums’ second side discusses the impending doom of a society forced to flee Earth, and the importance of this issue is highlighted by the songs’ backdrop of angry rock.

Bon Iver is an American indie folk band founded by Justin-Vernon, frontman-singer-songwriter. The name ‘Bon Iver’ was chosen based on the French phrase meaning ‘good winter’, perfectly in line with wintry motifs throughout Bon Ivers’ music.

“i, i” is Bon Ivers’ fourth studio album and was released August 30 with the record label Jagjaguwar. The most notable aspect of the album is its employment of chamber folk, the distinctive Britain-based guitar fingerstyle that combines elements of folk, blues, and jazz. In typical Bon Iver fashion, “i,i” is scattered with acoustic guitars, synthesizers, horns, and borderline jittery electronics- taking all traditional elements of Bon Ivers’ music and completely rearranging it.

“Norman (…) Rockwell” is Del Ray’s sixth studio album and was released on August 30th with Polydore and Interscope Records. The record demonstrates Del Ray’s exquisite writing prowess as she sings of the trials and  tribulations of life, and the pain of being alive. She replaced many of her usual stylistic elements with cascading piano ballads and folk-influenced sound. The minimalistic production by Jack Antonoff allows Del Ray’s haunting voice and stunning lyrics to shine to their full extent and convey the dreamy atmosphere that is so often associated with her music.