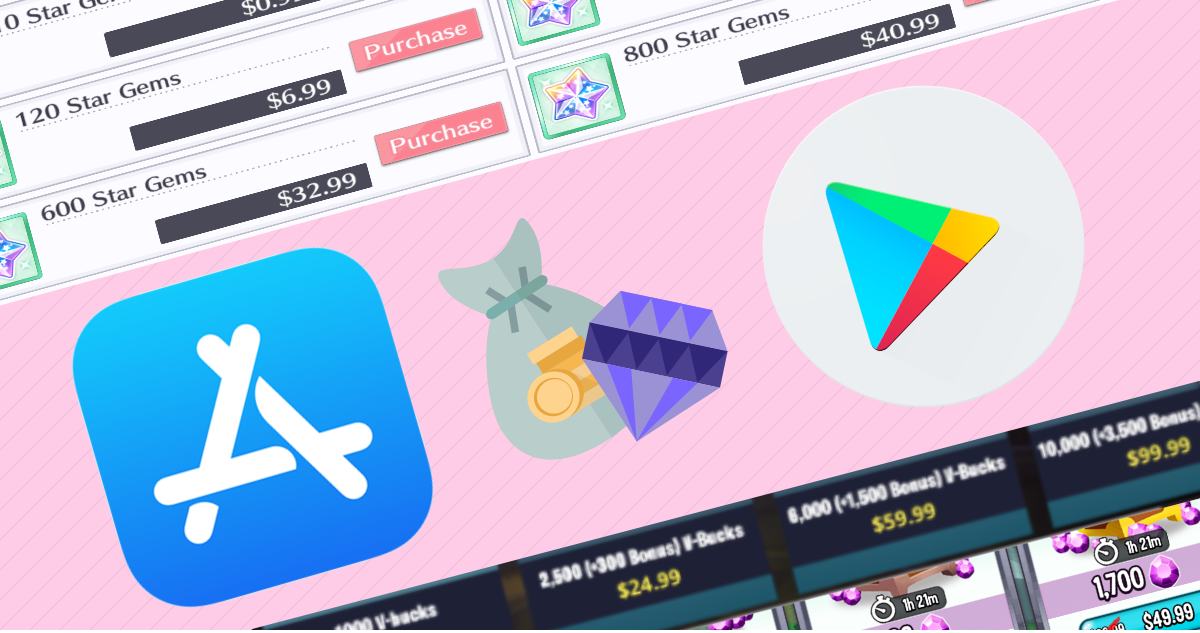 Microtransactions in Mobile Games: Playing for a Price

Microtransactions–when companies get people to buy items for real life money–are common in most mobile games today. Though they are usually small price transactions, a lot goes into them, in fact, most money made on apps is through microtransactions. They range from purchasing a premium currency in-game, a subscription, loot boxes, removing ads, and DLC (downloadable content). These games are free-to-play, where you can play for free, but purchasing items with real money is common.

Furthermore, many mobile games have two  currencies, one that’s easier to get and used to buy common items, and one that’s harder to get and used to speed up actions or purchase premium items in game. An example of this would be in Dragon City, a popular mobile game where you raise a city of dragons. Its two currencies are gold and gems. Gold is the more common currency, whereas gems are harder to get and are used to buy more expensive dragons and speed up hatchings. The more premium currency is thus more sought after, and developers will make it available in the shop for money. This format can also be seen in lots of world-building games, such as Clash of Clans and Township.

Another popular format is the remove ads feature. On many apps, especially the cheaply-made but very addictive apps such as Helix Jump and Aquapark.io, ads are playing all the time. After one round of playing, an ad. Doubling winnings, an ad. Ads are everywhere. This annoys many players, who may be tempted to purchase the remove ads feature for uninterrupted gameplay.

Subscription services are another type of microtransaction. Our favorite childhood games, such as Club Penguin, Moshi Monsters, and Animal Jam are well known for having a membership service. While the games are free-to-play, many features, items, and services were locked behind a paywall. Unless a person paid for a membership, they were stuck with the basic free features. For some of these games, the amount of stuff locked behind the paywall took away from the game’s playability, with kids wanting to purchase membership to get the full game experience.

“It’s annoying. Although some of the games like that do have other ways to enjoy the game, it’s harder and more frustrating this way. In Animal Jam, you get free sapphires if you’re a member, but without the membership you have to earn them by playing games. Another one that I play that has this stuff is School of Dragons (SOD) that with the membership you get the extensions free and all of the items that you buy are cheaper, but you can still get everything, it just takes so long. So yes, I do think that by having the memberships the games are not as enjoyable because you can’t just get the stuff when you want or need,” said Cassandra Sobus (‘23).

Loot boxes are popular in many games as well. They are different from other in-app purchases because with loot boxes, players aren’t choosing what they are paying for. Instead, they are paying for the small chance they’ll  get the item you want in a random selection of items from the box. This type of purchase became more popular among game developers in the west after being brought over from Japan’s version of this, called gacha (not to be confused with the gacha dress up game series that’s popular with preteens). Gacha games are the same concept as loot boxes– pay real money or with a premium currency to open a mystery box for the chance of getting a desired item. While loot boxes are just a feature in many western games, gacha games are different because they focus around the concept of getting a random reward from a box, and building up a strong arsenal of cards to clear levels. As a player of gacha games myself, I can confirm that it is hard to collect the amount of currency needed to open a box, and a lot of the time receiving a low rate item instead of a rarer item.

While the quest for rarer items and full playability is what many seek with in-app purchases, there is still another way developers convince players to purchase things. In more combat focused games or level progression, if a player is about to die or fail a level near completion, a lot of times a pop-up will appear asking if they’d like to buy their way out of failure. There is also the threat of losing items collected so far in the level, which is another reason why players may be more tempted to purchase in a critical moment like that.

While almost all games offer in-app purchases, there’s plenty of fun and popular games where purchasing items doesn’t make the gameplay better, and don’t have too many ads. Some of these games are Candy Crush, Temple Run, Fruit Ninja, and Among Us, which is steadily gaining popularity recently.