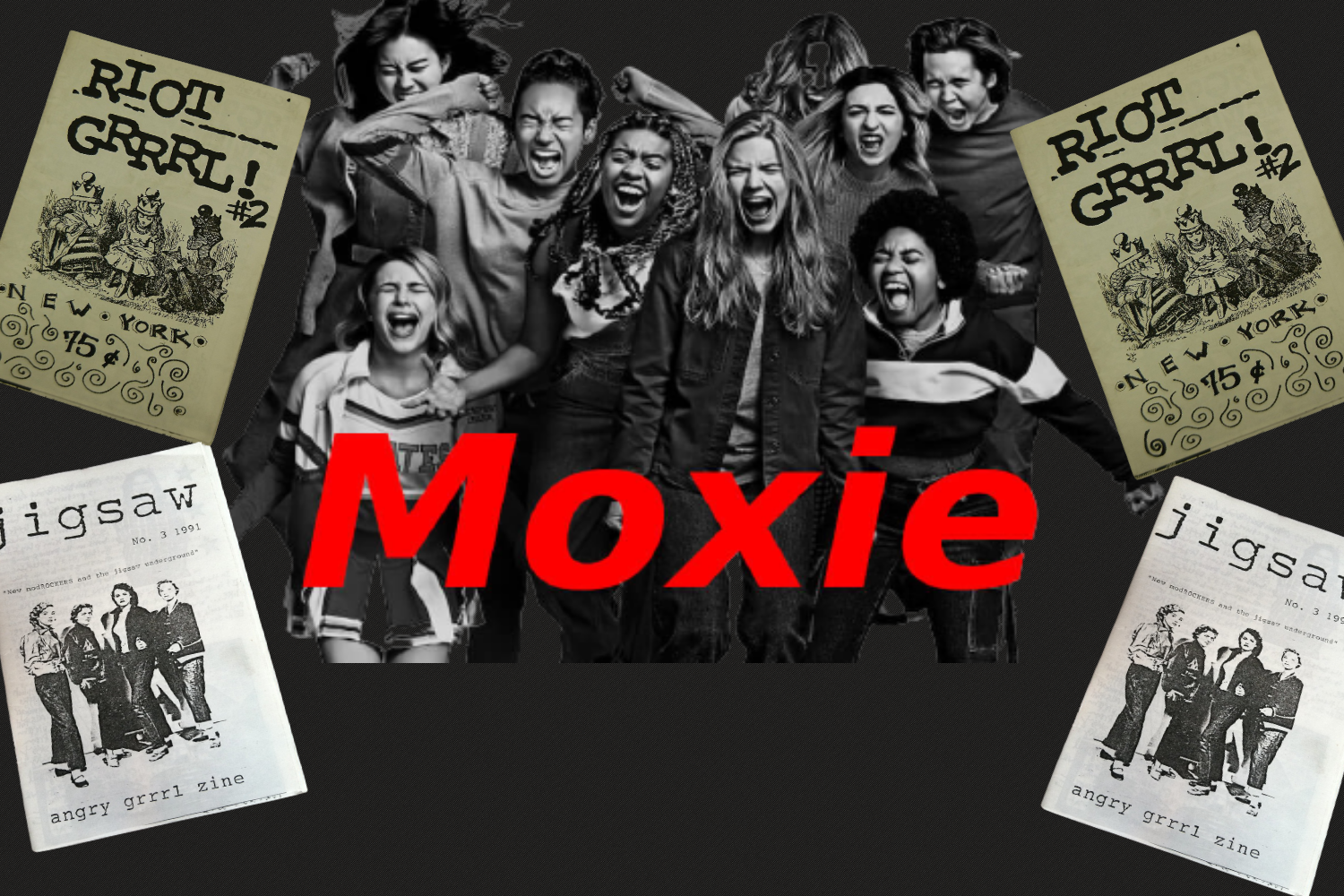 Riot grrrl zines and culture were most prevalent in the ’90s, but recently experienced somewhat of a resurge with new groups gaining traction on the internet. ((Photo Credit: Isabel Bequer/Piktochart/AchonaOnline))

Riot grrrl zines and culture were most prevalent in the ’90s, but recently experienced somewhat of a resurge with new groups gaining traction on the internet.

On Tuesday, March 3, “Moxie” premiered on Netflix, which was directed by and starred Amy Poehler. The film also featured a number of up and coming young actors including Hadley Robinson as Vivian, Lauren Tsai as Claudia, Alycia Pascual-Pena as Lucy, and Nico Hiraga as Seth, and Patrick Schwarzenegger as Mitchell.

“Moxie looks really good. The trailer addresses issues that girls our age have been dealing with for decades, and the outlet of women’s voices in the moxie magazine being silenced really represents that. I’m excited to watch the movie because the conflicts that are being dealt with are problems girls face everyday. The theme of a revolution throughout the school is something that girls can take to heart, and i’m really excited to watch this movie,” said Catalina Salgado (‘24).

The film is based on a novel of the same name by Jennifer Mathieu and follows high school student Vivian as she makes a zine, a self-published original magazine circulated among a small number of people, inspired by sexism she encounters within her school. Inspired by her mother Lisa’s involvement in feminist punk and riot grrrl culture when she was younger, Vivian’s anonymous zine sparks a revolution amongst the young women at her school. This revolution causes the formation of the group Moxie, which is a group of young women who are dedicated to fighting back against sexism at school and beyond.

Moxie manages to tell an inspiring and unique story about feminism and the power of female friendship. However, some of its activism and inclusivity falls short in comparison to its large and diverse cast.

The young actors in the cast shine, making even characters with limited material feel interesting and fresh. The women especially embody the range of emotions that many experience when faced with injustice, including rage, fear, and sadness at the state of things. Pascual-Pena, for example, in a scene where Lucy is being harassed by Mitchell for speaking up in class, perfectly shows both the character’s fear at being attacked and her anger at being thought of as less than because of her opinions.

Many of the issues addressed in the movie are almost universally applicable to girls in America. It covers being spoken over in class, the disparity between male and female sports in high schools, dress codes that unfairly affect women, and authority figures not taking harassment or sexism seriously, among other things. The strength of “Moxie” in its approach to these issues is that it focuses on them from the girls’ perspective above everything else. The male antagonist, Mitchell, does not have a lot of character exploration or development, something that works in Moxie’s favor, as it emphasizes that this is the story of women overcoming sexism, not of their sexist foes.

A post shared by Rosanna ~ Geekgirl And Proud💕 (@thequeenofgeek)

The actual “revolution” parts of the plot also add to the film, making it inspirational to young girls watching. The sounds of band Bikini Kill in the background of Vivian’s zine-making add to the coolness and intrigue of the movement at the center of the movie. While the riot grrrl culture threaded throughout the movie had the potential to be developed more, it still gives the film and its characters a certain uniqueness and grit.

The scenes where the girls come together to combat sexism also give the movie genuine heart. As they vow to support their classmates in any way they can, such as campaigning for student Kiera, played by Sydney Park, to win student athlete of the year, it makes the movie feel like a genuine celebration of female friendships and their power.

“It’s a movie about female empowerment and overall equality and honestly, I’m here for it. The show touches on how young girls are shamed for being “distracting” or showing “too much skin” when they wear a tank top or a skirt. It also discusses how people will purposely dead name trans students and refuse to acknowledge them by their new names. It’s a coming of age Netflix original that has everything I desire in a show: drama, prejudice, romance, and comedy,” said Carolyn Jacobsen (’23).

However, while the scenes that show the movie’s full cast of young women and their unique challenges are some of the best in it, they do not make full use of their talented and diverse cast to make strong points about activism and inclusivity.

The movie is well aware of the lack of inclusivity in feminist spaces, even having Poehler’s Lisa address how her and her friends from her riot grrrl days weren’t intersectional enough. It does address some of the unique challenges faced by women who belong to more than one marginalized group. Black girls Lucy and Kiera discuss being judged for their hair and butts, transgender girl CJ played by Josie Totah says that people don’t use her new name, and Asian-American girl Claudia addresses how her background and immigrant mother affect her activism and what she is comfortable with.

Unfortunately, these moments of introspection all feel like an accessory to the straight white main character Vivian, as they never dive too deep into these issues before the camera focuses back on her. As Claudia says to Vivian, “You don’t get it, Viv. You don’t get what’s going on with me because you’re white.” Despite this recognition of Vivian’s privilege, she never has to grapple with it herself or acknowledge how different her struggle is from other girls.

Moxie isn’t perfect, it feels like a tribute to the riot grrrl movement/3rd wave feminism, but it’s very telling that many people found it annoying when this movie is stuck in the 2000s with a few hints of intersectionality. Imagine if a woman of color was the main character 🤯

While a two hour movie cannot possibly explore every aspect of feminism and female identity, “Moxie’s” half-hearted attempt at intersectionality makes some of its activist message feel hollow. The movie could have benefitted from taking a more ensemble approach and drawing attention away from Vivian to the group at large. It could also be improved with more diversity in the writers room, as both screenwriters Tamara Chestna and Dylan Meyer are white women.

Despite its flaws, “Moxie” makes its message and intent clear: anyone can be the one to make a change. As Vivian says at the end of the film, even though she is not the “leader type,” she still was able to start a movement towards equality, and she found that she was not alone in it. While the movie can act as a starting point for young women to learn about feminism and activism, inspired viewers should go beyond the film itself to learn about intersectional feminism.

“Personally, I believe that intersectional feminism is an important subject to talk about because feminism as a whole is often regarded as a broad topic. Through intersectional feminism, we are allowed to explore the experiences of all people, not just women, and how they differ from one another. We finally see that, although many people may share similar experiences and or challenges, they are all drastically different for each person. Exposure and thoughtful discussion about intersectional topics helps us to grow not only as individuals, but as a society as well,” said Riley Rubio (’23).