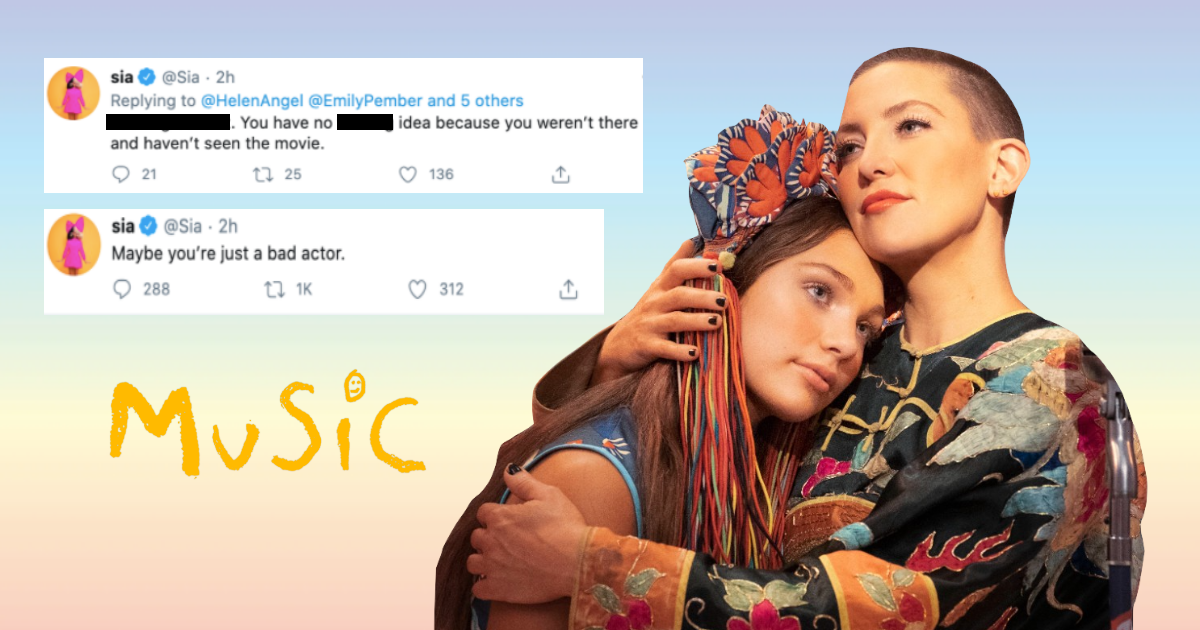 The movie “Music” is causing controversy on Twitter and within the neurodivergent community for its portrayal of autism. ((Photo Credit: Winsome Storm/Piktochart/Achona Online))

The movie “Music” is causing controversy on Twitter and within the neurodivergent community for its portrayal of autism.

On Nov. 19, 2020, the trailer was released for Sia’s directorial debut, “Music.” It stars Kate Hudson as Zu, Leslie Odom Jr. as Ebo, and Maddie Ziegler as Music. “Music” is about a newly-sober drug dealer named Zu who suddenly becomes the guardian to her younger, autistic, half-sister named Music.

Immediately after the trailer was released, criticism began to roll in for the poor casting of Ziegler as Music. Music’s character is a nonverbal girl on the autism spectrum. Her character is built on stereotypes and is essentially a caricature, perpetuating stereotypes of people on the spectrum further.

Twitter users responded to Sia by sending a barrage of tweets her way. Mostly they were asking why she decided to cast a neurotypical actress instead of an autistic actress, since autistic people have little to no representation in the media already. Others criticized the movie’s premise in itself. In response to most of the criticism, she tweeted back “Maybe you’re just a bad actor.”

“I feel if Sia’s focus in the movie was to show how music can be therapeutic for people with autism, she should have hired an autistic actress. By not hiring an autistic actress, she furthers the notion that autistic and neurodiverse individuals are less capable than ‘normal’ people. She is going against her own message by choosing to hire Maddie Ziegler, a family friend, instead of giving the opportunity to someone who would fit the role better and portray the issue more clearly,” said Elise Favret (‘22).

Another criticism Sia has received is because of the research she’s done, which is what Music’s character is based off. Sia used Autism Speaks as a source, which is known to be a hate group. If she spent three years researching, like she said, she would have realized how polarizing Autism Speaks is. Earlier in the year, Sia retweeted Autism Speaks and afterwards thanked a user who let her know how bad the organization is, which would suggest she knew before embarking on the project that they might not be a good source. Thus, Sia claiming to not know how bad Autism Speaks is another reason why people were criticizing her.

“While I can understand that Sia didn’t really mean any harm by her movie, claiming that she researched when it was very clear she didn’t was a really stupid idea on her part. I think that she handled criticism extremely immaturely and in her ignorance wounded an entire community [the autistic community] and the view of neurotypicals towards them. I think that the entire ordeal was unnecessary had she just not released a very obviously offensive movie, and it just goes to show how outrageously prideful and ignorant she is,” said Erin Hendrickson (‘22).

As of now, Sia has deleted her Twitter account as a result of the backlash she’s received over “Music.”

Sia also claimed to have worked with actresses on the spectrum before settling on casting Ziegler. However, this is actually not true, as Sia has said in interviews before the trailer release that the role was made for Ziegler. Note in these sources that the original name for the movie was “Sister” before it was renamed to “Music.”

Another controversy surrounding the movie is the inclusion of restraint scenes. Twice during the movie, Music is shown in distress, and in response both Ebo and Zu physically restrain her individually at some point during the movie. This is by far one of the most controversial parts of the movie, as the prone restraint technique has resulted in the deaths of many children. After intense criticism for these scenes, Sia announced on her Twitter that there would be a disclaimer saying that the movie does not condone the use of prone restraint and that these scenes would be edited out of future editions of the movie, before deleting her Twitter hour later.

She’s also lying about not knowing A$ is problematic pic.twitter.com/P180ZuuEs3

“With autism, people tend to have particular stereotypes of people with special needs. The problem with autism is that it is a spectrum, and when people portray people with autism in one way, we need to remember to treat [all] people with dignity,” said religion teacher Felix Kalinowski.

Thus, “Music” as a movie has been publicly viewed as extremely problematic and offensive as a whole. However, one positive conclusion is that the media attention being placed on the movie, might will bring more attention to neurodivergent people in the entertainment industry and lead to more representation for these individuals, thus some good may result from Sia’s actions.