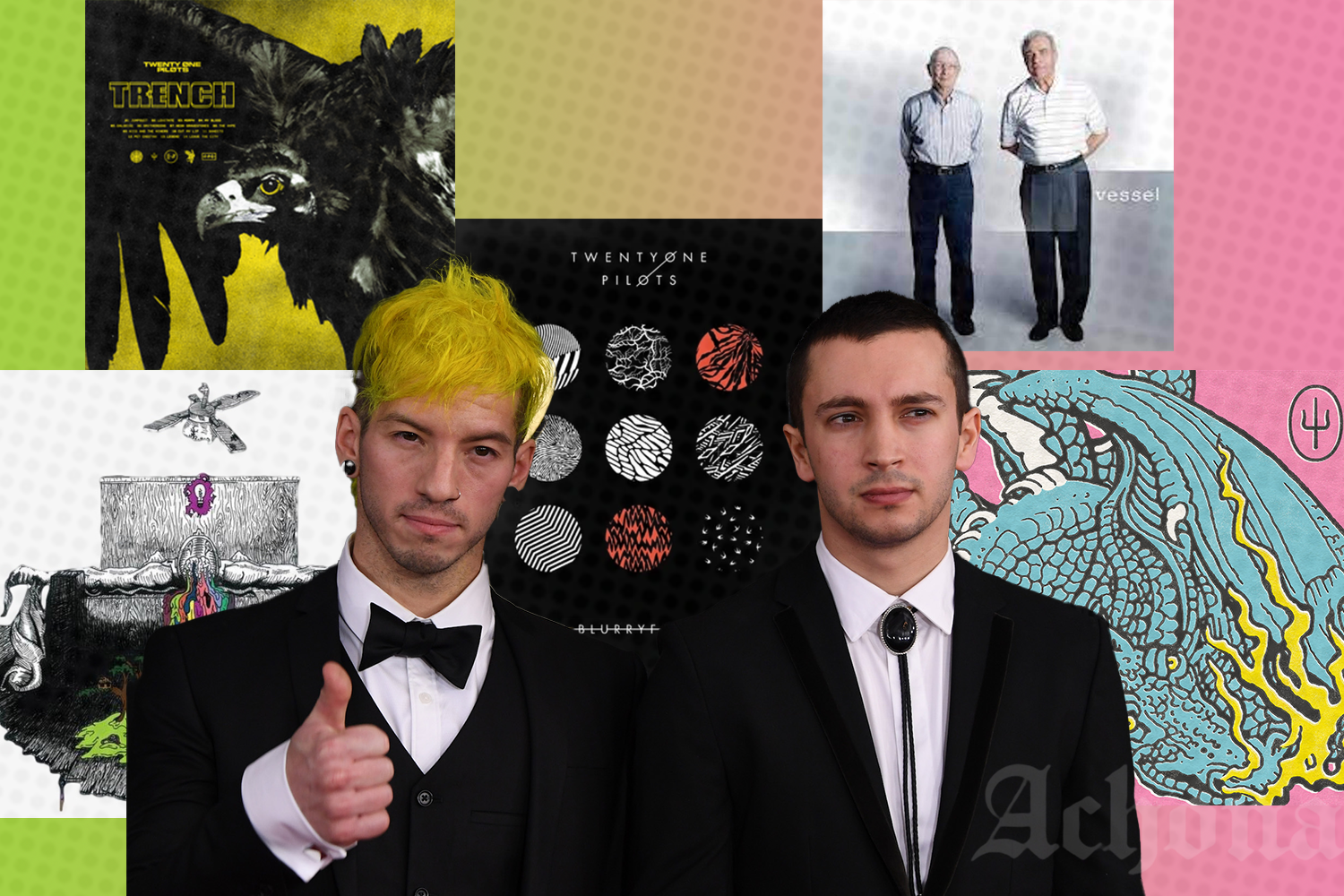 Twenty One Pilots has made five albums; their sixth is to be released May 21. (Photo Credit: Gigi Alfonso/Photoshop/Achona Online)

Twenty One Pilots has made five albums; their sixth is to be released May 21.

May 21 is the current release date of Twenty One Pilots’ new album, “Scaled and Icy”. It’s been three years since they made an album, and twelve years since their first (self-named) album release.

The band itself is named for Arthur Miller’s play “All My Sons”, in which twenty-one unlucky pilots meet their demise.   They originated in Ohio, and was originally comprised of lead singer Tyler Joseph, his middle school friend Nick Thomas, and eventually, Texas-born Chris Salih. However, after Thomas and Salih left to focus on school and work, percussionist Josh Dun joined the group.

Their first album, “Twenty One Pilots”, was released in 2009, and their tickets were advertised the old-fashioned way: Joseph’s mom stood outside Ohio State University to sell tickets. “Twenty One Pilots” was a tribute to classic alternative, with elements of rap and hip hop.

Their next album, “Regional at Best”, which featured the new lineup of only Joseph and Dun, was solo-released in 2011. Despite not being part of the band, Thomas and Salih still continue to help with merchandise production and conceptualization of albums. In April 2012, they announced their signing onto Fueled By Ramen, a branch of Atlantic Records which included notable artists such as Panic! At the Disco and Paramore. However, with the new record label came the fight to maintain ownership of the albums. Joseph was able to maintain ownership of the self-titled album, which remains available digitally, but as part of a signing agreement with Fueled By Ramen, rights to “Regional at Best” were transferred to the label, meaning that it was discontinued and removed from digital markets. Five tracks, however, were re-recorded and released as part of their third album, “Vessel” (2013).

“Blurryface” (2015) was an era-defining album. Every Gen-Z kid remembers “Stressed Out”, even though it was written as an ode to difficult millennial responsibilities. The album sold 134,000 million copies in the first week of its release, which pushed it up to #1 in the Billboard Top 200 Albums. Twenty One Pilots began touring “Blurryface” in Glasgow, Scotland, and spanned the US, Australia, Asia, and Europe.

Throughout 2016, Twenty One Pilots continued to write single hits, most notably, “Heathens” (which was their second single to make it into the top five of the Billboard Hot 100) but not releasing another album until 2018’s “Trench”.

They followed up with a notable quarantined single in April 2020, “Level Of Concern”, then mentioning to the press in November that they were working on a new album.

Sophomores Hannah Ribinski and Sofia Girgenti said, “I’ve liked Twenty One Pilots since sixth grade and I’m very excited to see them come out with another album.” “It’s been so long since the last one came out, and I feel like everyone’s been waiting in anticipation for it.”

“Scaled and Icy” will be released with an accompanying virtual concert, as opposed to a live event. Two songs have been released as a teaser, “Shy Away” and “Choker”.

Tickets to the live streamed concert as well as album merchandise are available on the Twenty One Pilots website.