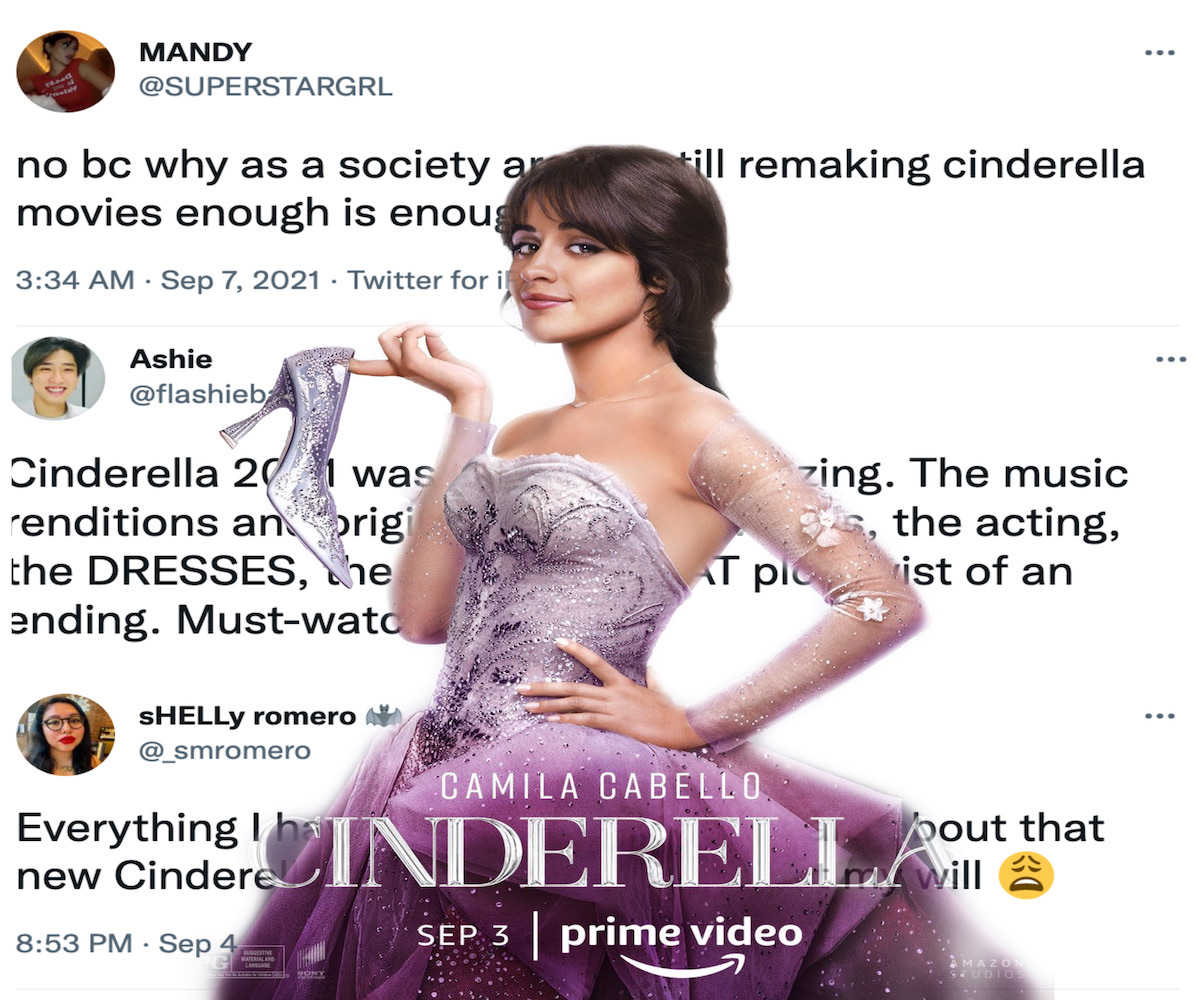 Many fans took to Twitter to share their opinions about the new Cinderella. (Photo Credit: Olivia Payne/ Picsart/ Achona)

Singer and former Fifth Harmony member Camila Cabello made her acting debut in Amazon Prime’s new Cinderella. Cinderella was released on Amazon Prime Video on Sep. 3, 2021. This adaptation changed the plot of Cinderella with a modern, feminist twist. Despite having a promising plot, for many fans, the movie fell flat.

This new adaptation surrounds Ella, an aspiring fashion designer, and her journey to becoming successful. While keeping the main traits such as the Evil Stepmother and Stepsisters, friendly mice, and a prince with a ball to find his wife, the movie moves away from the earlier adaptations’ focus of romance. When Ella is chosen to be the Prince’s bride, she is torn between love and her new business opportunity. The movie depicts Ella making choices that put herself first, not romance or her evil step-family.

Sophia Moore (‘24) said, “At first, I wasn’t sure if I was going to be interested in it, but it wasn’t as bad as I thought. I decided to watch it because my mom wanted me to watch it with her during our free time. My favorite part was when she [Cinderella] attended the ball and changed the original plot by saying she chooses herself and not marriage to a prince. ”

Cinderella contains a star-studded cast, featuring Idina Menzel as the Evil Stepmother, Billy Porter as Fabulous Godmother, and comedians James Corden, James Acaster, and Romesh Ranganathan as the mice. While many fans were excited to see the talented and diverse cast members, some were not as thrilled to see Cabello and Corden in the movie. The two stars received negative feedback on TikTok and Instagram after a video of Corden’s Crosswalk Musical featuring the Cinderella cast was leaked.

There were also many complaints about the amount of Cinderella remakes that have been released in the past decade. Many viewers compared the movie to previous Cinderella adaptations, such as Ella Enchanted and even Rags by Nickelodeon.

they are the only cinderella and prince charming i know pic.twitter.com/NcrYnprw8Z

The movie centers around female empowerment, which is very different from the many Cinderella adaptations we’ve seen before. The Prince is obviously not fit to rule, and his younger sister, Gwen, has many ideas for improving the kingdom. This was a great way to depict women as being just as suitable as men to rule. However, Gwen’s only character trait was her inability to think about anything other than proposing her ideas for the kingdom. Her character was flat and almost creepy in the way that she would lurk around the castle and listen in on conversations from behind paintings. While the royal family didn’t seem to mind, Gwen’s depiction actually harmed the progressive views that the movie was striving for, perpetuating the trope of businesswomen who are obsessed with their work. While the movie did have many good messages of female empowerment, it was overplayed in a way that almost seemed satirical of empowerment.

This movie was trending online for many reasons. Social media users pointed out the off-key and choppy vocals during some of the songs. Viewers blamed the off-tune songs on vocal production, while others stated that the cast simply could not sing.

As expected, Idina Menzel stunned with her beautiful voice, giving a rendition of “Material Girl” by Madonna and singing an original song titled “Dream Girl.” While Menzel’s voice was amazing, her acting was not on par. Rather than having the Evil Stepmother actually be evil, she was just sad and broken. She reveals that her dreams and aspirations were broken by men, so she tries to prevent the same from happening to her daughters and Ella by not allowing them to have dreams at all. In her song Dream Girl, she sings, “This treasure you found, bury it. The only way out, marry it. That shadow of doubt, carry it. Carry it down to your grave. The world doesn’t need another dream girl.”

While the movie was surrounded by controversy and complaints, it still had a fun plot and lots of funny moments. Billy Porter brought humor to his role as Fab G, and many side characters had small lines that brought lots of laughs. There was also diversity in the cast. The Prince’s ball featured princesses of many different cultures in their cultural gowns. Cabello represented her Cuban community as one of the few Latin Cinderella’s. The movie demonstrated important modern values while also having lots of humor and magic.

got people from every race, they showed the male “rat” talk about marrying the prince, billy porter THE ICON, cinderella being Latina, a girl ruling instead of her brother, the prince being supportive of his girl’s career. incredible values this is what we need.#CinderellaMovie

This new Cinderella adaptation has an overall great message and plot. There is a positive representation of many cultures and diverse cast from all around the world. The movie was magical while having a few cringy moments. It’s lots of fun to watch and sing along to. Cinderella is a great movie for the whole family for some laughs and a new take on the classic story.