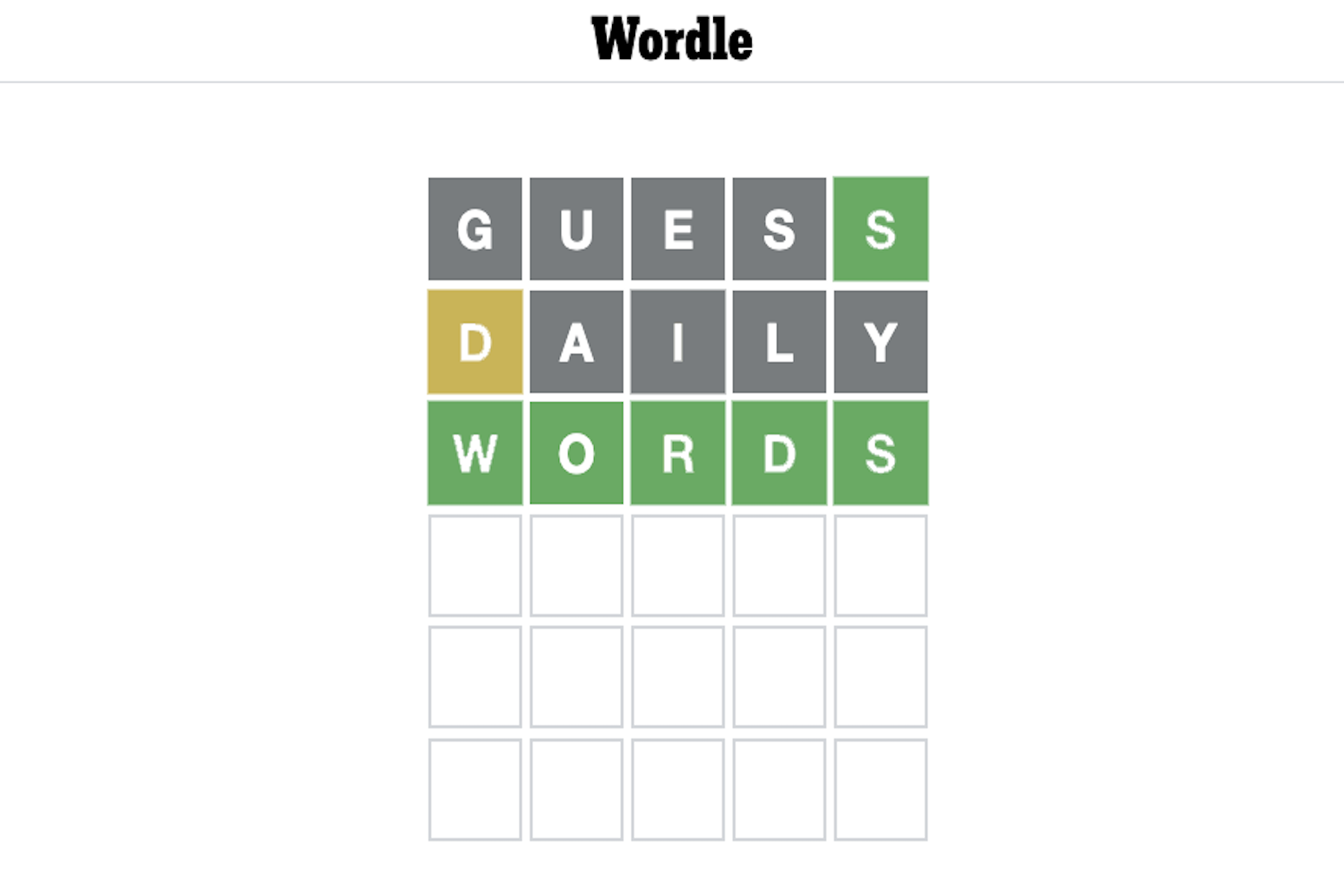 “Wordle,” a new word game, has taken common culture by storm, filling the trending lists of every search engine and social media platform. The game consists of a user attempting to guess a five-letter word through a series of up to six guesses. After each guess, letters that are in the right location will turn green, while letters that are in the word but in a different location will turn yellow. Letters not in the word turn gray.

Playing wordle really do be like that sometimes pic.twitter.com/nYxjzvkeWT

Interestingly, Wordle has none of the prerequisites usually found in addictive games. You can only play one puzzle a day; you are not given a ranking, and there isn’t even an app for it. The puzzle remains on a simple website: powerlanguage.co.uk. However, Wordle floods the likes of Twitter and Tiktok “for you” pages, and has even been played on late-night shows like “The Tonight Show with Jimmy Fallon.” Users often share their daily Wordle attempts through the emoji-text generated scoreboards that show their series of guesses through colored boxes, as to not reveal the daily word to wordle fans who have not yet completed the puzzle. Scores are awarded by the number of guesses it took to complete the puzzle, 1-6, with an “X/6” referring to the user using all six tries with no success.

Though created in Wales in October 2021, Wordle has only recently gained the worldwide influence it now holds. It began through the work of a software engineer Josh Wardle from Wales who wanted to make a new game for his girlfriend who had become bored during quarantine. In November, Wordle had 90 users. Currently, there are 300,000 daily players.

Wardle, intentionally designing the game free of the annoying “growth-hacking” tropes so common in popular apps, says “It’s something that encourages you to spend three minutes a day,” he said. “And that’s it. Like, it doesn’t want any more of your time than that.” He left out the overdone rush of push notifications urging users to return to the app that plague games in the current app store. Further, in the score sharing ability, Wardle did not include a link to his game that would increase the game’s reach due to him finding it “unappealing to the eye” and unnecessary. Recently, it has been announced that Wordle was sold to the New York Times for over a million dollars. Wardle, who claimed his wife’s obsession with word games that prompted Wordle’s creation was first cultivated through similar puzzles on the New York Times “Games” app, said it was a choice that “felt very natural.”

This shift of ownership, however, has raised concerns in the Wordle-loving community. Individuals fear the game will be moved on to the NYT Games franchise which charges a subscription fee. When asked of the possibility, Wardle simply stated, “I don’t understand why something can’t just be fun. I don’t have to charge people money for this and ideally would like to keep it that way.”

Good morning to everyone except all of the staff at the New York Times, their families, friends, pets and acquaintances.

Wordle has infiltrated the Academy community too, with a large proportion of both students and teachers playing daily. History teacher Stacy Filocco has been a fan of Wordle for weeks now, playing with her senior advisory when possible.

She states, “I think it provides a great, short break from whatever it is you are doing during the day. It’s a bit of a brain tease but you can fit it in when you want to turn your attention away from something else and it’s easy to collaborate with a friend.”