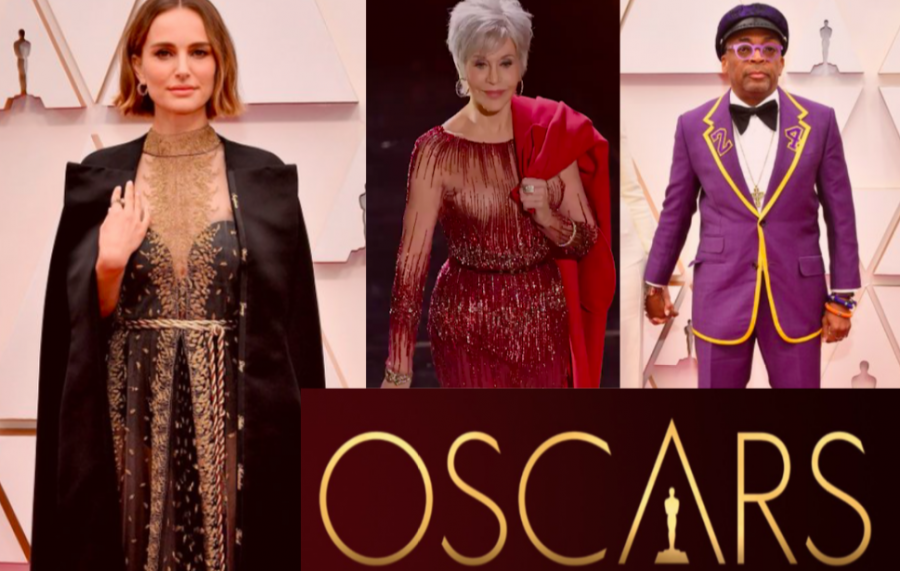 The Oscars are a prime night for fashion designers, with the most expensive dress ever made for the night costing over 4 million dollars.

The Oscars, a night dedicated to celebrating achievements in film, also serves as a way for celebrities to demonstrate their wealth and style on the red carpet. Fashion is a large aspect of the night, with attendees spending millions of dollars on outfits. Entertainment outlets begin coverage of the red carpet hours before the ceremony. This year, many celebrities took advantage of this coverage, using their outfits to advocate for social causes and to pay respects to influential figures.

Director Spike Lee took to the carpet in a purple and gold suit with “24” embroidered on the back, paying tribute to basketball star Kobe Bryant. Bryant passed away in a helicopter crash on January 26, 2020, two weeks before the awards. Lee had a personal connection to the athlete, having directed his documentary “Kobe Doin’ Work” (2009), which followed a day in his life. When asked how he was doing in wake of the accident, Lee was at a loss for words and shrugged at the question.

Kimberly Egoavil (‘23) said, “It was a very respectful way to honor Kobe. It was very discrete and not very flashy, and other people would have used it to bring attention to themselves rather than to Kobe.”

Spike Lee is honoring Kobe Bryant with a jacket inspired by his iconic jersey. #Oscars pic.twitter.com/QYogEhVag4

While Lee’s outfit was in remembrance of a famous star, others used the platform to advocate for social change. Actress Jane Fonda has been a fierce advocate for environmental consciousness through her Fire Drill Friday protests, in which she leads protests on the White House to bring attention to climate change. To further support this cause, Fonda made a declaration that she would no longer buy new clothing. True to her word, Fonda re-wore a dress from the 2014 International Cannes Film Festival, as well as a red coat which she decided would be her last ever clothing purchase. Fonda believes she has a duty to take action, saying, “When I talk to people and say, ‘We don’t really need to keep shopping. We shouldn’t look to shopping for our identity. We don’t need more stuff,’ I have to walk the talk. So I’m not buying any more clothes.”

Delaney Ross (‘23) said, “I thought it was really cool, and a really rare thing, because a lot of celebrities wear something super extravagant for one night and then never wear it again. I think it’s a little unrealistic for her to never shop again but it would be really nice if she actually followed through.”

Radiant as always, @JaneFonda, and with an important message for us all. pic.twitter.com/zuCHK5UtGm

Another memorable outfit from the night was actress Natalie Portman’s cape showcasing the names of eight female directors she believed the Academy snubbed this year. Both the Oscars and the Golden Globes generated attention for this. Both organizations featured all-male nominees in the “Best Director” category, an issue which has plagued the award shows’ past. Only five women have ever been nominated for this award at the Oscars, with only one winning – Katherine Bigelow for “The Hurt Locker”.

Madison Kwo (‘23) said, “The fact that there wasn’t a single woman in the Best Director category, while there were plenty of films that were directed by amazing women, such as “Little Woman” by Greta Gerwig is awful. [Portman’s cape] is a way of speaking out that is subtle, yet still impactful because of her status.”

WOW #NataliePortman is looking regal on the carpet. Did you know? Her cape is embroidered with the names of female directors that were not nominated. #Oscars (photo: Getty Images) pic.twitter.com/XdwpFmr9fd

While many appreciated the stars’ outfits and what they stood for, others were more critical, saying they were not truly taking action. Rose McGowan, a social activist, commented on Portman’s ensemble on Facebook, saying, “The kind of protest that gets rave reviews from the mainstream media for its bravery. Brave? No, not by a long shot. More like an actress acting the part of someone who cares. As so many of them do. I find Portman’s type of activism deeply offensive to those of us who actually do the work. I’m not writing this out of bitterness, I am writing out of disgust. I just want her and other actresses to walk the walk.”

Natalie Portman owns a production company and of the 11 films made, only 2 were directed by a woman and that woman's name is Natalie Portman.

Brynn Wilary (‘23) said, “I believe it was an act of activism because the dress was worn to an event that was watched live by millions of viewers and will be remembered as a symbol spreading awareness for the cause. However, I feel as though if she continued to create symbols like the dress and take other actions it will cause a greater impact.”