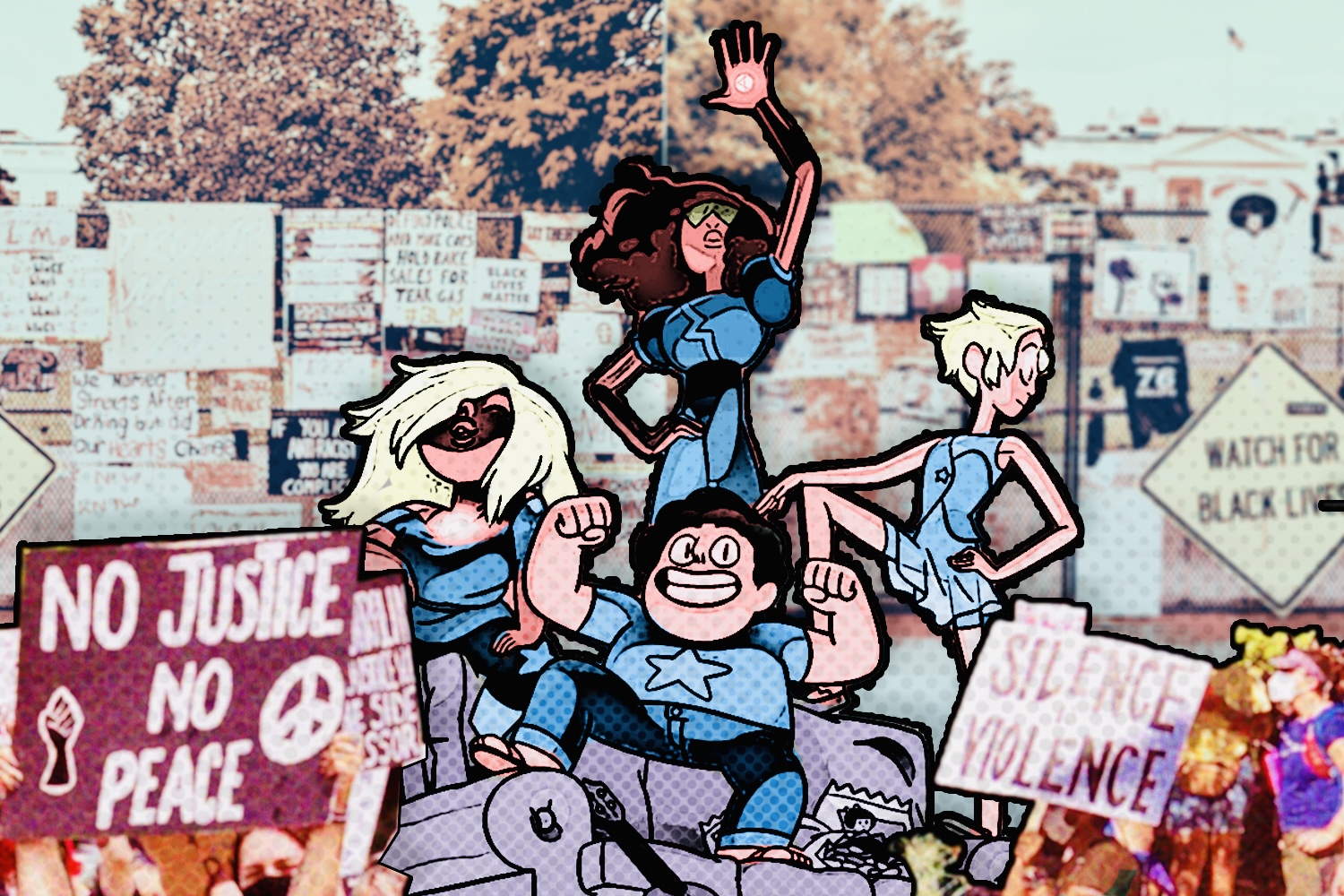 “Steven Universe,” a show on Cartoon Network, has been the face of a recent anti-racism PSA broadcast on the network. The second of four total videos was released on Dec. 3, and has gotten 313k likes and 15.4k shares on TikTok. ((Photo Credit: Maddie Glaum/Adobe Photoshop/Achona Online))

“Steven Universe,” a show on Cartoon Network, has been the face of a recent anti-racism PSA broadcast on the network. The second of four total videos was released on Dec. 3, and has gotten 313k likes and 15.4k shares on TikTok.

Are Kids Ready for a Conversation About Race?

How young is too young for children to discover the grim reality of racism? With the year we’ve had, it’s been almost impossible to keep them in the dark.

2020 has been progressive in all forms — after protests flooded countless cities following the death of George Floyd in May, lawmakers have banned chokeholds and implemented police reforms. Sports teams and syrup brands have eliminated racist insinuations, and confederate-linked statues have toppled in cities around the world. The topic of systemic racism is more talked about than ever.

And Cartoon Network believes that children, too, should be a part of the conversation.

On Dec. 3, children’s TV channel Cartoon Network released an anti-racism PSA that has since gone viral on social media. The video, “Tell The Whole Story,” features the character Pearl from the show “Steven Universe” and is the second of four installments in the Crystal Gems Speak Up campaign led by show creator Rebecca Sugar.

Cartoon Network for the win… pic.twitter.com/i7ftsBOLjB

In the short, Pearl, played by Deedee Mango, asks a classroom of students who invented the lightbulb. After they elicit the response, “Thomas Edison,” Pearl refutes. “That’s not entirely true.”

Not only does Pearl rightfully attribute the creation to Lewis Howard Latimer, the Black inventor responsible for creating the filament inside the lightbulb, but follows with a criticism of the method of teaching Black History in American schools.

“These textbooks are incomplete,” she says. “There were black Roman warriors, black medieval knights, black classical musicians, black cowboys, black fighter pilots . . . Where are they? You rely on these stories to know your own history. Thanks to systemic racism, most of your storytellers prioritized white accomplishments which leaves you with an incomplete picture. Ask yourself as you’re learning history, who is telling the story? Was this modified to make white readers comfortable? Are major details being left out that would credit people of color and center their point of view?”

“Steven Universe,” the face of the anti-racism PSA’s, is notorious for its progressiveness. Created by Sugar, the first woman to spearhead a cartoon show on a mainstream network, the show focuses on Steven, a child living with multiple parents of the same gender, two of which are a prominent lesbian couple. With diverse characters in terms of sexuality, body type, and ethnicity, and a voice cast consisting primarily of women-of-color, the show has been applauded as the most progressive cartoon ever.

The Crystal Gems Speak Up campaign, headed by Sugar and creator of Cartoon Network show “OK-KO: Let’s Be Heroes” Ian Jones-Quartey, was first revealed in October 2020. The campaign seeks to “stand behind anti-racism as part of our commitment to fostering inclusion and equity,” through the release of PSA’s that advocate for anti-racism.

“Tell The Whole Story” is the second of four total videos to be released by the campaign. The first, “Don’t Deny It, Defy It,” features Garnet, a lesbian character from the show, who encourages children to acknowledge, rather than deny, the existence of racism. Released in October, the video received more backlash than praise.

Critics of the new PSA’s say that racism is too heavy a topic for children to understand, that “children don’t understand races” and that Cartoon Network is encouraging children to emphasize their differences.

How about we stop talking about race and we talk about how we are only human :/ also no that doesnt happen in childhood stage, children dont understand races and thats how it should be. It honestly baffles me that you think this is a amazing message to send to all of the kids 🙃

But while it’s easy to believe that race is too complex a concept for children to understand, studies have said otherwise. Children actually begin to develop an understanding of race as early as three-months-old — a study from the Journal of Experimental Psychology indicated that three-month-old children prefer faces from certain racial groups, 9-month-olds use race to categorize faces, and 3-year-old children associate some racial groups with negative traits.

In another study, it was found that both white and black children as young as six are not only aware of their racial identity, but are more likely to assign positive features to whites. Preschool children were also found to use racist language to produce harmful results and to evoke emotional reactions by victims.

Psychologists believe that when it comes to educating children about race, the earlier the better. “Even if it’s a difficult topic, it’s important to talk with children about race, because it can be difficult to undo racial bias once it takes root. Toddlers can’t do calculus, but that doesn’t mean we don’t teach them to count. You can have a conversation with a toddler about race that is meaningful to them on their level,” said Professor of Psychology at Skidmore College Leigh Wilton, Ph.D.

While concerns about understanding race are relatively unfounded, other criticisms of Cartoon Network’s PSA’s include that political statements (i.e. the issue of systemic racism) should be entirely independent of cartoons, especially if the shows are intended for the young and impressionable.

“I do think it’s a strong thing to be exposing kids to, and I don’t think it’s Cartoon Network’s responsibility to educate kids on that stuff. I think it falls more on the parents and the kids’ family to educate them about the world around them. I wouldn’t want my kid to learn about systemic racism from TV — lots of kids take whatever they see on the media and run with it without knowing what it really means,” said Olivia Scarpo (‘21).

And this is why I'm not gonna put my kids watching this bs. It's supposed to be a kids show, not a political mind twist

These concerns could stem from a frustration with the entertainment-politics clash; alongside Cartoon Network, other forms of entertainment have been riddled with political banter. Jimmy Kimmel’s late-night show, “Jimmy Kimmel Live!”, has become notorious for politically-charged monologues about healthcare, gun control, and the Trump administration. As a result, his viewership has dropped 30%.

But alongside the entertainment value lies concerns about the impressionability of children. Children are proven to mimic behaviors seen on TV, and it’s argued that parents don’t want their child’s favorite characters to lecture them about a topic they don’t fully understand.

However, even when TV content is not argumentative like the PSA’s, it’s still very much influential: a study revealed that when children see Black or Latinx people on TV, 50% of children expect an affiliation with crimes, violence, or other problems. But if children watch Cartoon Network’s anti-racism content on TV that raises awareness of a white-washed society, it could dismantle those predisposed prejudices.

“While cartoons can be about entertainment, I think they can also be a way to show kids that being equal is something that still needs to be achieved for many people. Exposing them to a heavy topic might be debated by some, but basic human rights are not something they should be shielded from. Showing them that all people should have equal opportunities from an early age isn’t really politics, but rather a message about fairness,” said Bryn Hall (‘21).

A child might not understand the term "systemic racism", but they will remember the word and understand its bad. They also will absorb and sincerely question why their history books don't have black knights, and others. Children are a lot smarter than you give them credit for.

Other critics simply say that the latest PSA, “Tell The Whole Story,” is “propaganda,” that “the black man did not invent the light bulb, a white man did” and that Cartoon Network should “stop blackwashing history.”

But even if these claims are true, it’s also true that children develop racial prejudices long before preschool. These stem mostly from what children see on TV, resulting in a perpetuation of racism. And so, many beg the question: are kids ready for a conversation about systemic racism? Or are they best left sheltered?

Some believe that while Cartoon Network’s intentions were good, the conversation is best left for older, more mature audiences who can better understand the extent of the situation.

“I think it’s good to teach children about past inequalities and to push towards future equality at a young age. Building a foundation of trust between races for future generations is one of the most important things we can do today. With that being said, the harsher side of inequality may be better left to educate older children or teenagers. But I think instead of just educating children about inequalities, we can educate them about how to treat people equally. I think it’s possible to do that while avoiding some of the controversial messages that some parents may not approve of young children learning,” said Sophia Hasara (‘21).

The comparison was a reach but do we really need to teach 6 year olds about systemic racism? Leave that to late high-school/college professors when the mind is mature enough to handle the topic.

However, others maintain that many young Black children actively suffer at the hand of systemic racism — and while educating young children about the horrors of racism is daunting, it’s a necessity in today’s world.

“As someone who watched Cartoon Network religiously growing up, I think it’s really important that they’re advocating for anti-racism on the network. Systemic racism is a huge issue that’s come to light recently, and it makes life harder for lots of people. I think it’s great that Cartoon Network paints systemic racism in a negative light, especially since kids who typically watch that channel are at the ‘impressionable’ age, and will recognize that it’s bad, even if they don’t fully know what it means,” said Academy Middle School Alumni Kylee Achilles.

It was uncomfortable talking to my 11 year old daughter about systemic racism and violence in our country, but I did it anyway. We don’t have the luxury of keeping this from our kids anymore. A lot of people never did.

One thing is certain — with so much light shed towards America’s prejudices and racist institutions, psychologists and activists alike say parents should have at least some conversations about race with their young children. Even if the conversation is not about systemic racism, police brutality, or other issues that could be disturbing for children, at least the practice of racism — the root of those topics — will be discouraged at a young age.

“As someone with younger siblings, I think it’s extremely important for children to be educated on racism, especially with what’s been happening lately. Racism is not a political issue; it’s a human issue. I believe Cartoon Network is providing a good message to children, as long as they keep the conversation’s focus on love and not hate,” said Arianna Cortes (‘22).