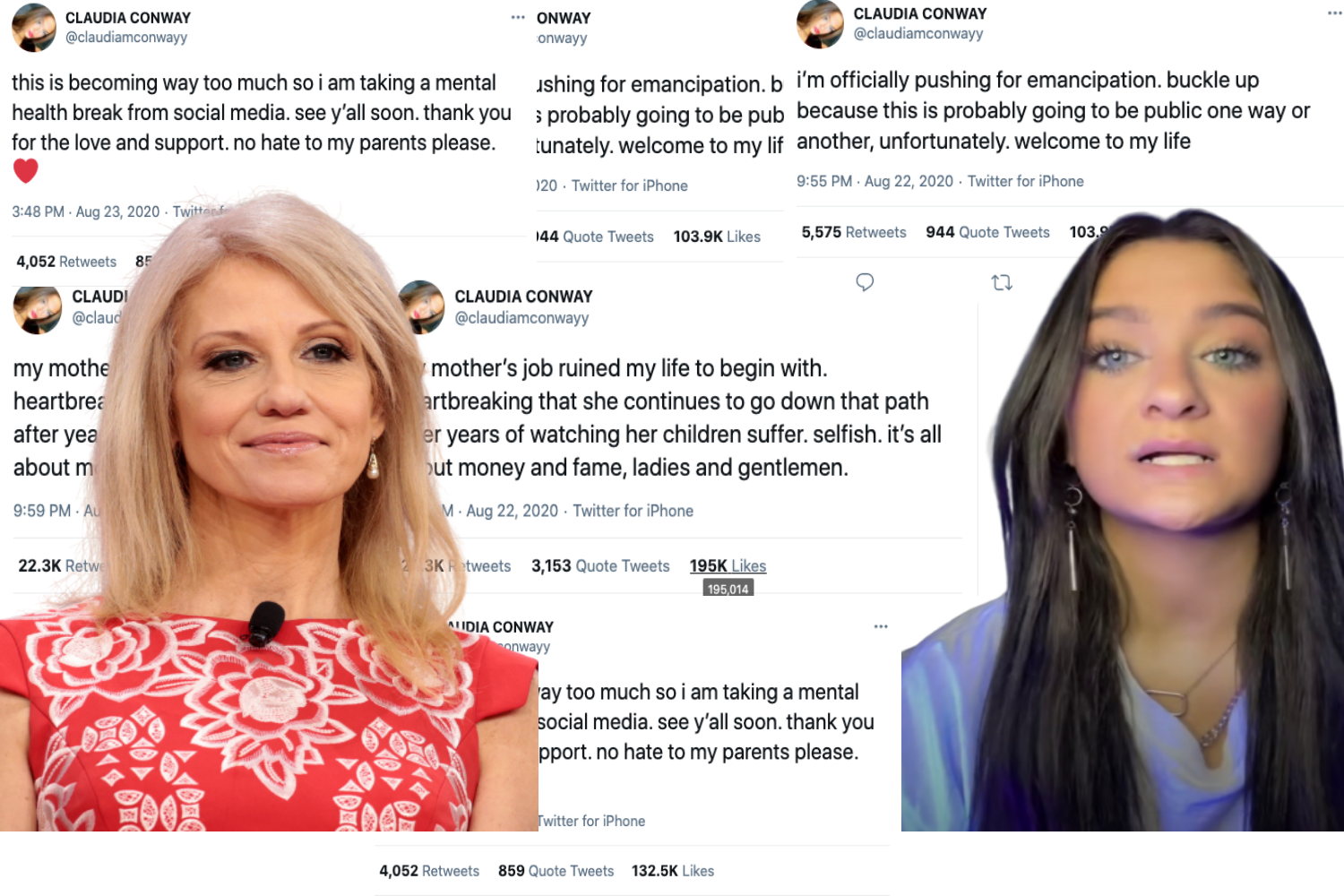 Despite deleting many posts from her Twitter, Claudia Conway has left up tweets criticizing her parents and detailing her wishes for emancipation ((Photo Credit: Isabel Bequer/Piktochart/AchonaOnline))

Despite deleting many posts from her Twitter, Claudia Conway has left up tweets criticizing her parents and detailing her wishes for emancipation

The Conway family members are no strangers to attention. The couple of Kellyanne Conway, former Senior Counselor to President Donald Trump, and George Conway, founder of the Lincoln Project, are prominent Republican figures in American politics and have made several appearances in the media over the last four years. The rise of their daughter Claudia Conway is more recent, but has made several waves across the internet and brought into question the potentially toxic dynamics of the family.

The younger Conway first came to fame in June 2020, when multiple of her videos on the app TikTok went viral when she spoke out in favor of the Black Lives Matter movement. She also openly criticized the Trump administration, Republican party, and her parents, quickly gaining the attention of the internet and media outlets.

These criticisms evolved into a public feud between her and her mother, with Claudia Conway even seeking emancipation from her parents in August of 2020. Her efforts were fruitless, and Kellyanne announced she was leaving her job as Senior Counselor under Donald Trump’s administration to focus on repairing her relationship with her daughter.

y’all love to twist everything 😭😭 i’m not getting emancipated because of my mom’s job.. it is because of years of childhood trauma and abuse

Since then, the pair have been in and out of media coverage for their publicly unhealthy relationship. The spotlight recently returned to the Conways after Kellyanne allegedly posted a nude picture of Claudia on Twitter’s new “fleets” feature, which functions as a story feature where pictures are available for 24 hours. The picture was quickly deleted as Kellyanne claimed she was hacked and never meant to post the picture. Later that day, Claudia shared a TikTok stating that while she believed her mother did not intentionally post the picture, her mother should not have the picture at all and ended the video saying her mother was going to jail.

In the weeks leading up to the incident, Claudia made frequent TikToks accusing her mother of physical and verbal abuse. She revealed bruises along her body, along with videos of her mother yelling at her. Despite these accusations, the situation did not garner strong media attention until the nude photo of Claudia was posted. The day after the news broke, Claudia once again took to the app TikTok, this time to rescind her claims of abuse and ask the internet to stop calling local authorities on her mother. She also announced a break from social media, stating she and her family were “tired of making headlines.” The video was shared by her father on Twitter, but has since been made private.

Claudia also deleted the videos of Kellyanne’s alleged abuse. In a later video, she said she did not delete them because they were untrue, but because she was “afraid of being gaslighted.” The videos were posted as a way to find help, but she said she believed that nothing would be done about the situation.

The situation called into question the severity of the abuse allegations made against Kellyanne, and the best course of action to address them. It was also questioned if Kellyanne had forced her daughter to delete her videos in preservation of her reputation. So far, the claims of abuse have not gained any traction and no legal action has been taken against Kellyanne. This called into question how Kellyanne’s status, money, and identity have played a part in the treatment of these allegations.

The way authorities and the media approach the accusations made against wealthy and famous members of society is radically different from the way it approaches everyday citizens. A prominent example of this is the college admissions scandal that took place in 2019, in which many wealthy parents were found to have paid for fake standardized test scores for their children to gain admission to elite colleges. Among these parents were actresses Lori Loughlin and Felicity Huffman, both wealthy white women. Despite being found guilty of fraud, Loughlin served two months in prison and Huffman served only 14 days.

“I definitely think celebrities receive different treatment, because if something were to not go their way the whole world would see it and the people serving justice would face the consequences. It’s unfair that just because they have a following that they can get away with more than normal people can,” said Sofia Girgenti (’23).

While the allegations against Kellyanne Conway are more severe than fraud, the treatment she has received is similar. This has led some to believe that Kellyanne’s money and power have protected her from legal action being taken and led to a harmful situation for Claudia, where abuse is perpetrated with no way for her to truly speak out. This has also led to conspiracies that Claudia was being forced by her mother to post videos rescinding her abuse allegations.

Kellyanne should be locked up (for child abuse), not making lucrative book deals. Imagine if she wasn't white?! https://t.co/Dq6aVEs5KE

“I think that Kellyanne Conway’s position as a public figure working under the Trump Administration and being in politics, as well as her being a white woman with lots of money, protects her from the consequences of how she treats her daughter and the things she says publicly,” said Ava Cabrera (‘24).

Other factors have also contributed to the treatment of the situation. At 16, Claudia’s age has lessened the severity of her words for some, making the allegations seem like the natural dramatization of a teenager. The power dynamic of the two women has also contributed to the idea that Claudia’s videos absolving Kellyanne were forced, as Kellyanne has a more powerful role as her mother, especially since Claudia is a minor.

However, others have not been so quick to believe the abuse allegations. While the Conways have seen significant news coverage, their entire lives have not been revealed to the public. Their familial dynamics cannot all be discerned from news articles and social media posts. The allegations may not hold as much weight as they appear to from Claudia’s previous posts.

“I think it’s possible that Claudia is being abused, but I trust that local authorities will handle the situation. It could be all out of context,” said Isabella Pearson (‘23).

While the allegations against Kellyanne may be untrue, the treatment they receive is important. Victims of abuse are often afraid to speak out of fear of their abusers. When they do speak out, it is imperative that they are not shamed for speaking out and that they are believed unless the allegations are proven to be false. Regardless of age, money, or status, abuse is a serious crime that leaves victims traumatized for life.