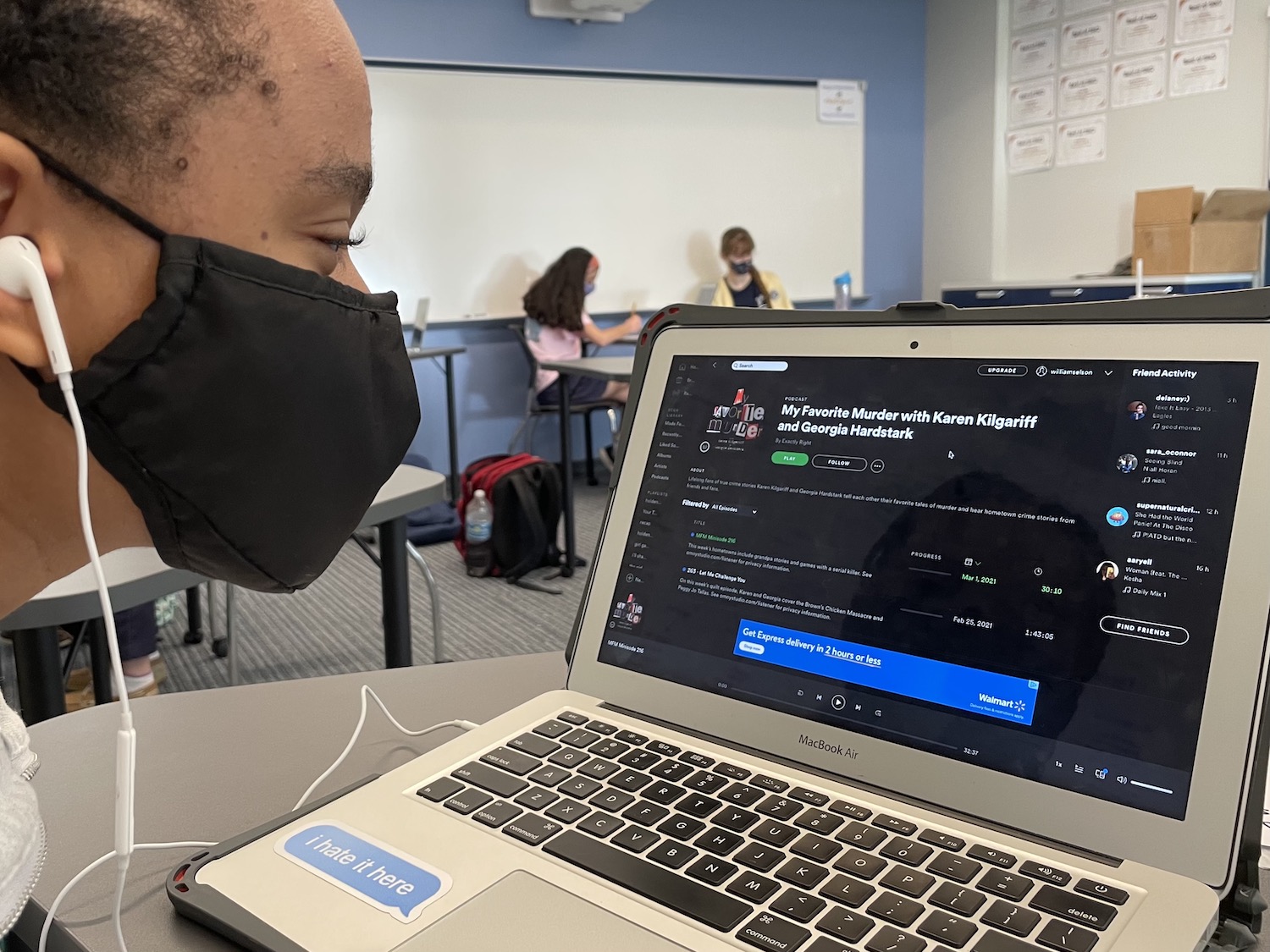 “My Favorite Murder” is one of the most popular amateur true crime podcasts, with over 34 million streams. ((Photo Credit: Isabel Bequer/Achona Online))

“My Favorite Murder” is one of the most popular amateur true crime podcasts, with over 34 million streams.

The true crime genre is incredibly popular and spans across many media types. Movies, books, and podcasts are all forms of entertainment often used by amateurs and professionals alike to convey narratives of criminal court cases and the mystery surrounding them. However, the genre and media produced for it raises important questions of morals and ethics.

True crime has been popular for centuries, with the earliest forms of true crime literature dating back to the Elizabethan era. The genre centers around telling the facts of criminal cases while maintaining an entertainment aspect. While its relevance has waxed and waned over the years, a resurgence of the genre came with the idea of the true crime podcast. The 2014 podcast “Serial” is noted as the first true crime podcast and had massive success, even winning a prestigious Peabody Award for innovative storytelling. The first season centered around the murder case of Hae Min Lee, an 18 year old high school student.

While “Serial” received high praise, it also received criticism from many others. The host, Sarah Koeing, was said to be insensitive to the victim of the case, as well as pushing her into narrative tropes to further the appeal of the case. She was also criticized for not properly educating herself on the Korean culture of the victim and getting key facts wrong about her culture. The podcast was even denounced by the Lee family itself, who refused to participate in the show in any way.

Despite these critiques, Serial helped to usher in a new era of true crime, one filled with amateur podcasts and professional documentaries alike. However, many of the pieces of media in this genre still face the same flaws that “Serial” did. They are criticized for being insensitive towards the victims and others involved in the cases that they discuss.

Podcasts are a popular media source for amateurs to try their hand at true crime due to their accessible nature. Notable examples include “My Favorite Murder,” “Up and Vanished,” and “Last Podcast on the Left.” Many prominent podcasts also have a humorous aspect to them, acting as more of a conversation with criminal cases mixed in. This leads to some shows making jokes about the cases themselves, taking away from the severity of the subject matter. Some also value entertainment over fact, spreading inaccurate information and discussing cases without properly researching them first.

In their attempt to entertain, these podcasts also treat victims and criminals insensitively, making them into characters that fit their narrative rather than approaching them as humans. Death and the death penalty are also approached extremely casually in many of these podcasts. For example, in an episode of “My Favorite Murder,” the hosts described rapist Lawrence Singleton being sentenced to death as being “fried.” This language and attitude is overall dehumanizing to both the victims and the perpetrators.

While amateur podcasts face this set of problems, professional pieces of media about true crime are not immune to similar issues. Professional documentaries and movies can also have insensitive aspects to them. These documentaries do not require consent from the next of kin of the victims of these cases, and often do not receive it. For example, Netflix’s “I Am A Killer” featured the story of Robert Mast, whose family expressed they specifically did not want this case shown and wrote multiple letters to producers and writers asking it to be pulled from the show. This can bring global attention that the families of these victims did not ask for and harm their mental health by bringing back traumatic memories of these events.

“I think that consent from the next of kin should be mandatory. It’s not right to profit off of someone’s grief, especially if it was a recent enough occurence that the next of kin is still alive and grieving,” said Madison Kwo (‘23).

Despite the insensitivity of their approaches, these podcasts and shows are still profiting off the stories they tell. Documentaries and television series are able to make money from people watching their show on either cable or streaming services. Podcasts are also able to profit from sponsorships from companies and from appealing to their fan bases through merchandise and live shows.This leads to exploitation of those involved in the crimes they share, as they are making money from their stories without gaining consent or properly educating themselves on them.

The insensitive treatment of these crimes goes further than a poor attitude. Especially in amateur true crime interest, this insensitivity often stems from prejudice towards the identities of the victims they discuss. Male hosts often discuss female victims through a misogynistic lens, not treating them with the same respect as male victims. This can come from hosts having a problematic view of women, such as Mike Boudet from “Sword and Scale,” who received backlash after making suggestive comments towards female fans and making jokes using profanity against women on International Women’s Day. Boudet’s podcast was let go by Wondery, their parent company, but it still highlights the issues that having a prejudiced host can create when discussing female victims.

The hosts of these podcasts have a difficulty discussing these topics from a racial standpoint. The majority of hosts of the most popular podcasts are white, and have a tendency to only discuss white victims and criminals. They ignore many cases that have people of color at the forefront. If they do discuss these cases, there are still issues in their approach, as their own racist biases can be revealed in how they discuss these victims. Additionally, the hosts may not do proper research and have an insensitive approach towards foreign cultures, such as the case of “Serial”.

Both women and people of color are disproportionately affected by violent crime in comparison to their male and white counterparts. 1 in 5 women were raped in 2018, 21.8 percent of victims of violent crimes were black, compared to 13.5 percent of the population. By not approaching their cases with the same respect as others, these podcasts discredit these facts and take away from the severity of the crimes. This is just another aspect of the larger issue of true crime entertainment’s distance from reality and the lack of respect they have towards the crimes they discuss.

1. Anyone listen to the podcast @TrueCrimeObsess?

I just listened to it for the first time and I’m turned off.

Their Sandra Bland episode has lots of inappropriate laughter throughout

They’re not making fun of her, but the laughing seems inappropriate

Insensitivity goes beyond the media and can affect the consumers of it. It desensitizes listeners and viewers to the violence of these crimes. It makes violent crimes feel like entertainment rather than a serious issue and encourages the dehumanization of criminals and victims. Additionally, it creates a fan culture around these people, especially criminals, that can be harmful. While these criminals are people and their humanity must be acknowledged, so must the fact that they have committed heinous crimes against others.

“It is unfortunate to see how some true crime fans focus more on the gruesome details of their crimes and treat these criminals with more dignity than the victims themselves. For example, several true crime fans in the TCC (True Crime Community) romanticize these vicious murderers, and tend to disregard how they have impacted the lives of real people for a mere romantic fantasy,” said Paige Gonzalez (’23).

Despite these flaws, true crime is still a very popular genre, especially among young women, and its popularity does not seem to be diminishing any time soon. As such, more ethical guidelines need to be put into place to regulate the media being produced.