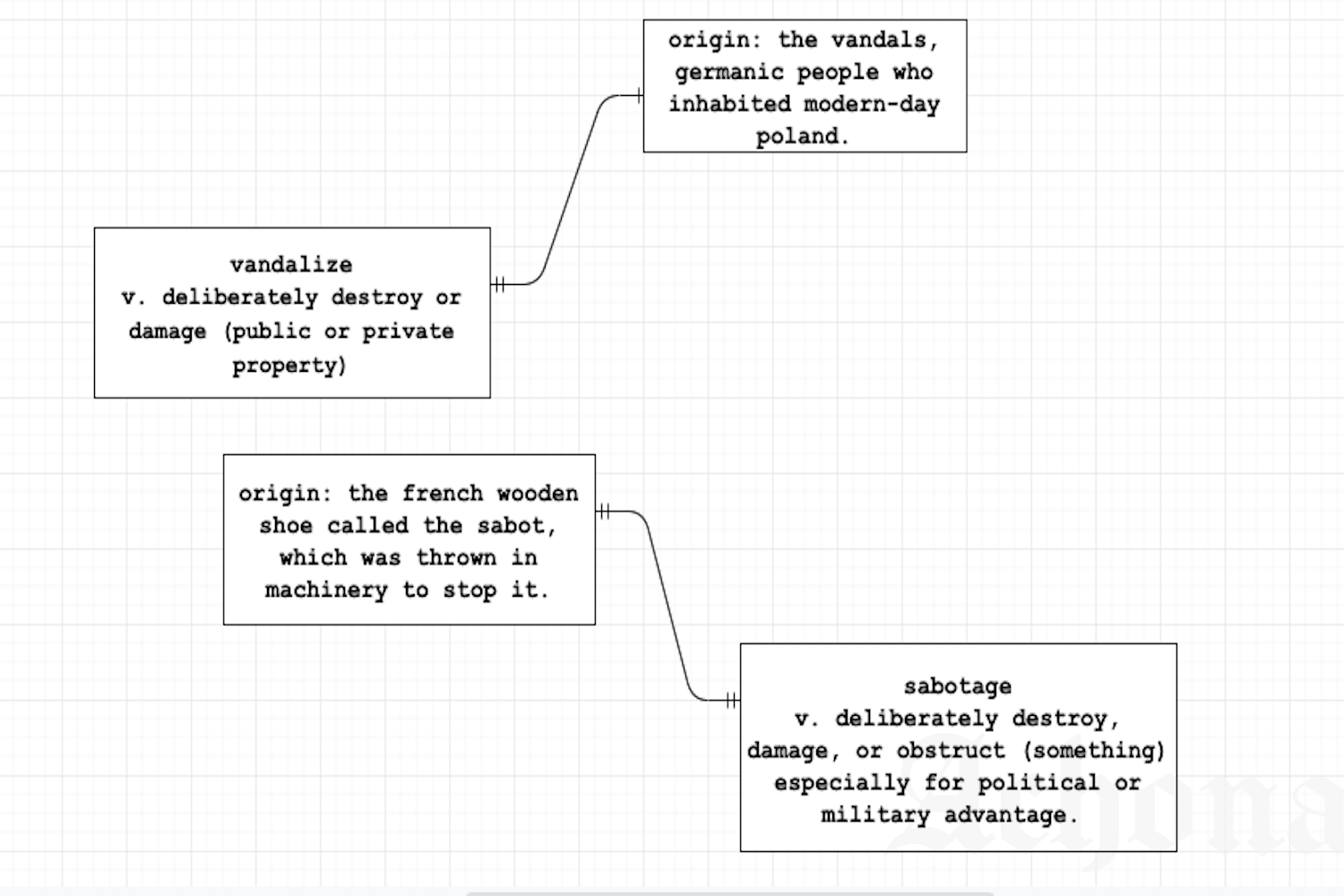 This is a flowchart diagram of the origins of the words “vandalize” and “sabotage,” which contain fascinating origins. ((Photo Credit: Gigi Alfonso/Photoshop/Achona Online))

This is a flowchart diagram of the origins of the words “vandalize” and “sabotage,” which contain fascinating origins.

The Origins and Etymologies of Words and Why they Matter

When you hear the word “vandalize,” the most likely image your mind conjures is of a hooded figure graffiting a public bridge or wall, or a group of bored kids scratching at government property signage.

But in reality, the word “vandalize” was a derogatory term against the Vandals, a Germanic people who first inhabited what is now southern Poland. Renaissance and early-modern writers called them “barbarians,” “sacking,” and “looting” Rome. This led to the use of the term “vandalism” and the verb “vandalize” to describe any pointless destruction, particularly the “barbarian” defacing of artwork.

Etymology, the study of words, is kept alive by interested linguists wanting to understand the origins of words and why they mean what they mean. In most cases, English words are derived from foreign words. Most of the language has ancient Anglo-Saxon or Latin origins. English, being a West Germanic language, originated from Anglo-Frisian dialects brought to Britain in the mid 5th to 7th centuries AD by Anglo-Saxon migrants from what is now northwest Germany, southern Denmark, and the Netherlands, which explains why English and German have similar-sounding words. However, what separates English from German is the other European languages that wormed their way into English. For example, the words “cinema,” “etiquette,” “dentist,” “pasteurize,”  and “allowance” all come from French.

rebel (adj.)
c. 1300, from Old French rebelle “stubborn, obstinate, rebellious” (12c.) and directly from Latin rebellis “insurgent, rebellious,” from rebellare “to rebel, revolt,” from re- “opposite, against,” or perhaps “again” + bellare “wage war,” from bellum “war.”

Spanish and French Teacher Darlene Lanfranconi said, “Thanks to William the Conqueror who defeated the English in 1066, French was spoken in England for hundreds of years. That is why anywhere from 30 to 60% of English words come from French. By studying French, you not only learn a beautiful language, but you may also end up improving your English vocabulary as well.”

One fascinating English word that came from French is “sabotage.” The French word “sabot” was a kind of wooden shoe worn by French and Breton peasants. When industrialization spread through Europe, peasants who were upset with the factory system would “sabotage” machines by throwing a sabot into the machinery.

For example, the word “bully.” According to Merriam Webster, the word “bully” was a term of endearment, used to refer to one’s lover. It came from the Dutch “boele,” but in the 1750s, people understood it to be a modification of the French word for beef, signifying a harsh and blustering person, associated with the gruff bull.

Lexey Cacciatore (‘24) said, “Even the word ‘bullying’ has a certain weight to it. If you say you’re being bullied, that’s going to escalate any situation. The administration, if it’s good, is more likely to do something about it just because you used the word ‘bullying.'”

chauvinism (n.)
1840, “exaggerated, blind nationalism; patriotism degenerated into a vice,” from French chauvinisme (1839), from the character Nicholas Chauvin, who idolized Napoleon and the Empire long after it was history, in the popular 1831 vaudeville “La Cocarde Tricolore.”

Similarly to “vandalize,” the phrases “no can do” and “long time no see” are phrases with racist origins. They are forms of mockery of poorly spoken English, known as “pidgin English” or “broken English,” as spoken by non-Europeans. “No can do” is the literal translation of a Chinese phrase, and “long time no see” is an imitation of “primitive” English spoken by Native Americans.

However, etymology does not control the meaning of the word. It is the usage, and not the etymology, that shapes its meaning. Freedom of speech is certainly something to encourage, but so is considering the origins of the words you use.