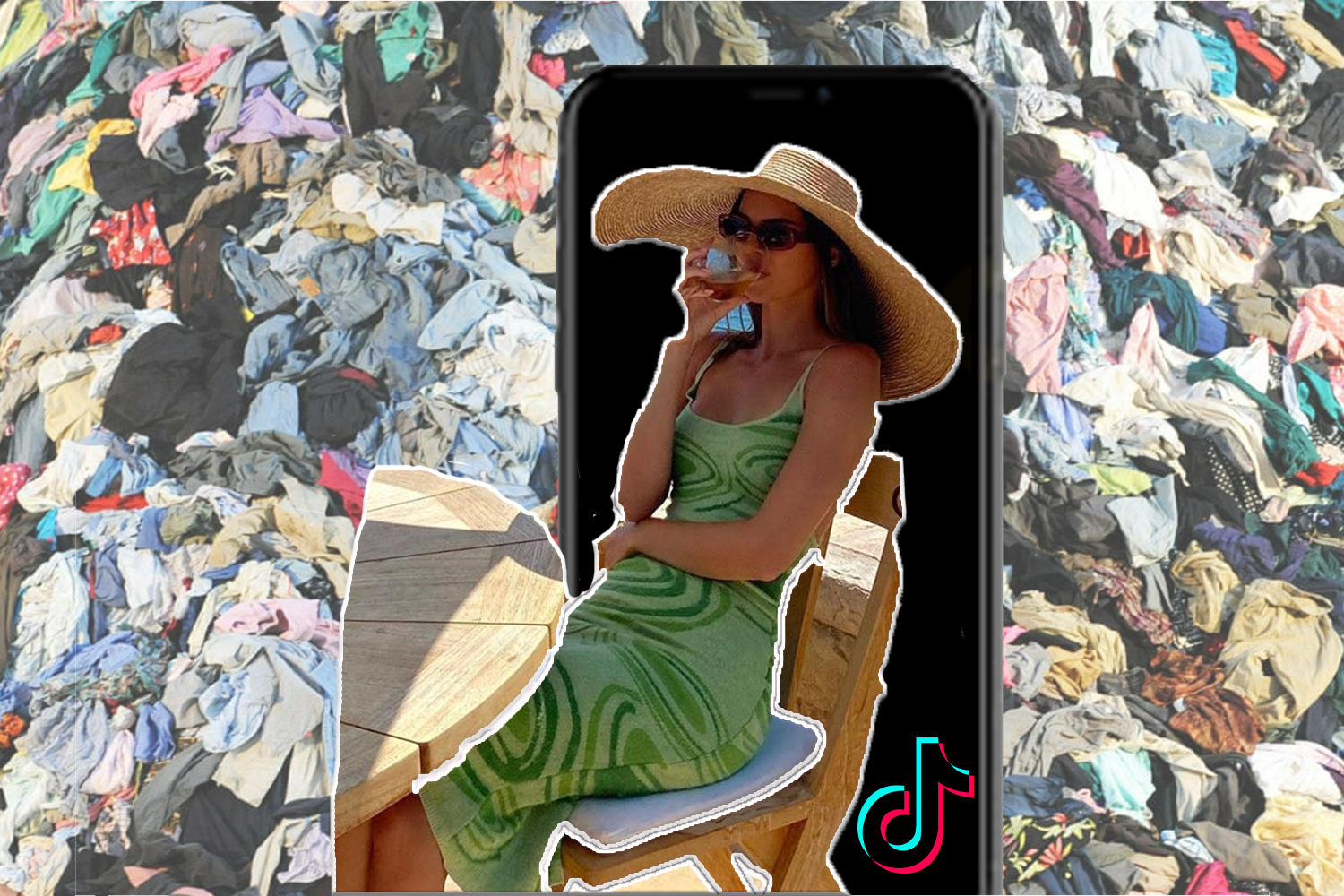 Tiktok’s trend often mimic the styles of influencers and celebrities, such as Kendall Jenner.

It’s no secret that the internet moves at the speed of light. Topics of conversation and interest are constantly changing, not only from day to day but from hour to hour. The app Tiktok is especially notorious for this, with its short videos and endless scrolling that allows users to watch hundreds of clips within a day. In its relatively short lifespan, the app has taken over the cultural sphere.

But Tiktok’s fast-paced style doesn’t just apply to celebrity gossip — it also extends to fashion, propelling an already quickly moving trend cycle into hyper speed. Take, for example, the Hockney Dress from UK based store House of Sunny. First spotted on Kendall Jenner, the dress soon gained popularity on Tiktok. However, due to its expensive price tag it also spawned many cheaper, and less ethically made, copycats. Within months, the dress and its counterparts were everywhere. And yet, it soon went out of style, losing the allure of exclusivity originally associated with it.

“That dress looks 80s inspired to me, and that style is in right now, so I understand why it’s so popular, but the patterns and shapes just had too much going on. I found it hard to look at. I think the appeal is that the person wearing the dress looks good, not that the dress itself looks good,” said Dana Camp (‘24).

This is just one example of a micro-trend, or a fashion trend that gains popularity rapidly, and loses it just as quickly. On Tiktok specifically, micro-trends tend to be individual pieces, such as a dress. This item then creates dozens of items similar or exactly the same as it on fast fashion sites such as Shein or Amazon. The market becomes oversaturated, and soon this piece is everywhere, especially on trendy influencers. But then jarringly it’s over, with people online declaring it outdated or unstylish.

These micro-trends benefit from a specific formula. They are unique in some way — they stand out, whether it be through bright colors or fun patterns. But they’re so completely out of the norm that they lose any of their universal appeal. They’re unique and stylish, but in an incredibly generalized way. In a way, this is their downfall. Once everyone has an item, it’s no longer appealing and has lost any semblance of individuality. They are not, however, very reusable due to their distinct nature. What once was bright and interesting is now garish and outdated, doomed to the back of a closet, the thrift store, or the landfill.

These trends contribute towards fast fashion, or the process behind the rapid production of high volumes of clothing. An insidious process, this process is harmful towards the environment and contributes towards human rights violations. Due to the synthetic fabrics and toxic chemicals in many fast fashion garments, they do not decompose in landfills, rather sitting stagnant and releasing toxins into the air. These toxins are present in the clothes during the production process as well, exposing them to potential harm. This, combined with the extremely poor conditions of sweatshops, long hours, and unfair pay all contribute to major human rights violations towards these workers.

But these hyper specific trends are not limited to individual items. Rather, they apply to entire styles, or as they’re colloquially known, “aesthetics.” Ranging from “VSCO girl,” characterized by big t-shirts and beachwear, to “cottagecore,” shown through flowy dresses and inspiration from nature, Tiktok aesthetics rely on specific imagery to gain traction. Because of its large influence, these trends can often dominate fast fashion brands while they are on trend. To fit these trends, it is also common for people to show themselves buying massive amounts of clothing to fit into a certain idea. This makes it perhaps more harmful than a micro-trend, overwhelming the market with an entire style rather than just one item. And when they eventually die out, the effects are even more extreme.

These specific styles have hit fast forward on the trend cycle. Previously, trends had much more staying power, remaining popular for years before falling out of fashion. Trends could be traced back to entire decades, such as low-rise jeans in the 2000s or shoulder pads in the ‘80s. Fashion trends have also tended to operate in 20 year cycles, with some version of a style coming back every 20 years. The ‘70s was influenced by the ‘50s, the ‘80s by the ‘60s, the ‘90s by the ‘70s, and so on. Yet the late 2010s and now the 2020s have regurgitated decades past quicker than ever, moving through the past 40 years faster in less than a decade. It also lacks a distinctive style because of how quickly it moves — its style identity has not even had the chance to be defined.

It further pushes the idea of consumerism, especially to younger demographics. Combined with the instant gratification of internet validation, teens are being overwhelmed with the mindset of more being better.

These trends also remove individuality and personal style. It begs the question of whether people truly like their outfits, or if they are simply following the massive internet herd. With tutorials for almost exactly how to dress and wear to shop, it becomes hard for one to actually develop their own thoughts on fashion and how to dress in a way that makes them confident and express themselves.

“I only try to wear trends that match my personal style, so I don’t wear that many. If it matches my aesthetic then I’ll buy it, but I won’t get it just because it’s trendy,” said Kendall Mobley (‘24).

Of course, the internet and Tiktok are not all entirely set on fast fashion and micro-trends. Some influencers and other users have pointed out the harm these trends have done, and suggest alternatives to certain pieces or styles that can be reused once a trend is over. The conversation has even gone beyond the app itself, seen by fashion influencer Emma Chamberlain discussing the issue in her podcast, “Anything Goes.”

Wanting to purchase sustainable fashion but also not wanting to spend £200 on a top. pic.twitter.com/o0qn1Pk0Bk

In a way, this issue has opened up broader discussions about consumerism and the modern world, causing a pushback against consumer culture in general, not just on Tiktok. Some have taken to combating the issue by dressing in more classic silhouettes, such as simple button ups and jeans that are timeless and reusable, rather than giving in to the trend cycle. Others have adopted the practice of shopping at “slow fashion” or sustainable brands, that advertise humane manufacturing processes and aim for less environmental waste. Or, for a cheaper alternative, some have taken to going to second hand stores to keep up with trends in a more ethical and environmentally friendly manner.

“I could definitely do better about shopping sustainably, as I think there’s always room for improvement, especially with being a consumer. The biggest thing I do is get most of the clothes from small businesses, so I’m not supporting large corporations. I also try to go thrift shopping sometimes, as I find it really fun,” said Aspen Hunter (‘23).