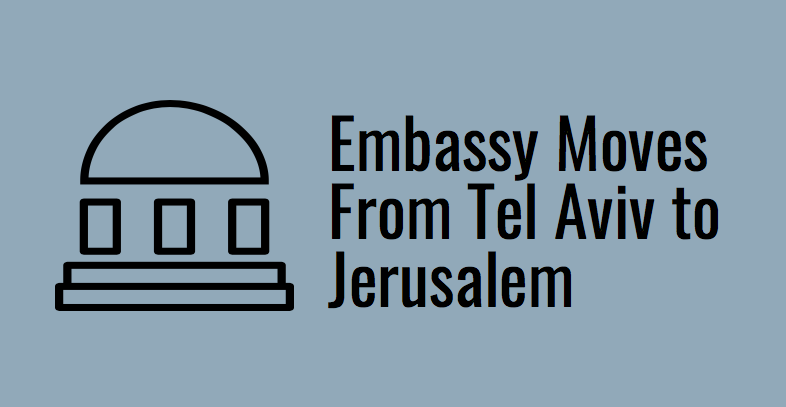 Jerusalem is located in the Middle East. The city is in the Judaean Mountains in between the Mediterranean and Dead Seas.

On Monday, May 14, sixty Palestinians were killed with more than 2,700 injured by Israeli forces in protests along the Gaza border. It was the deadliest day in Gaza since 2014. The victims killed by gunfire ranged from the ages of 14 to 39. However, an infant later died from inhaling tear gas.

“I feel like the move was insensitive to the feelings of the Palestinians, and I think the move should have been better thought out,” says Emara Saez (‘21).

The planned protests were sparked by President Donald Trump’s decision to move the U.S. embassy from Tel Aviv to Jerusalem. The movement of the embassy coveys America’s official recognition of Jerusalem as the capital of Israel.

Trump’s decision broke over 70 years of international consensus and decades of U.S. policy. Many argue that the embassy creates more tension between the Israelis and Palestinians.

“I’m disappointed that something that we technically should not be apart of has caused a much larger problem and affected the lives of so many people,” says Sophia Montero (‘20).

Although the main demonstrations were held on Monday, and additional 46 Palestinians have been killed and hundreds have been injured during protests occurring over the last six weeks.

“I believe that it was completely unnecessary to move the embassy, and in doing so we have created a war zone,” says Tress Jacobs (‘20).

While some students feel that the move was unnecessary, others agree with Trump’s decision to move the embassy.

“Israel recognizes Jerusalem as the capital. Tel Aviv and Jerusalem are de facto joint capitals. Tel Aviv consists more of the business and economic relations of Israel, while Jerusalem consists of the government, parliament and supreme court. Since the government is in Jerusalem, it makes more sense to have the US Embassy in Jerusalem. The embassy’s purpose is to work out problems with Israel, which would mean specifically its government,” says Caitlyn Asher (‘19).

The protests in Gaza were 60 miles away from where the embassy was opening. Ivanka Trump and her husband, senior advisor Jared Kushner, attended the opening ceremony. Trump tweeted about the event from Washington.

“I legitimately do not understand the logic behind this action. The Palestinian people were forced out of their homes, have faced nothing but extreme marginalization and discrimination, and have been disproportionately targeted and victimized by Israeli forces through aid given by the U.S.  They deserve recognition. This action has further endangered the possibility of peace and a two-state solution. The consistent massacre of the Palestinian people is a modern-day genocide– and as a nation, we must reconsider this action,” says Hira Khan (‘19).