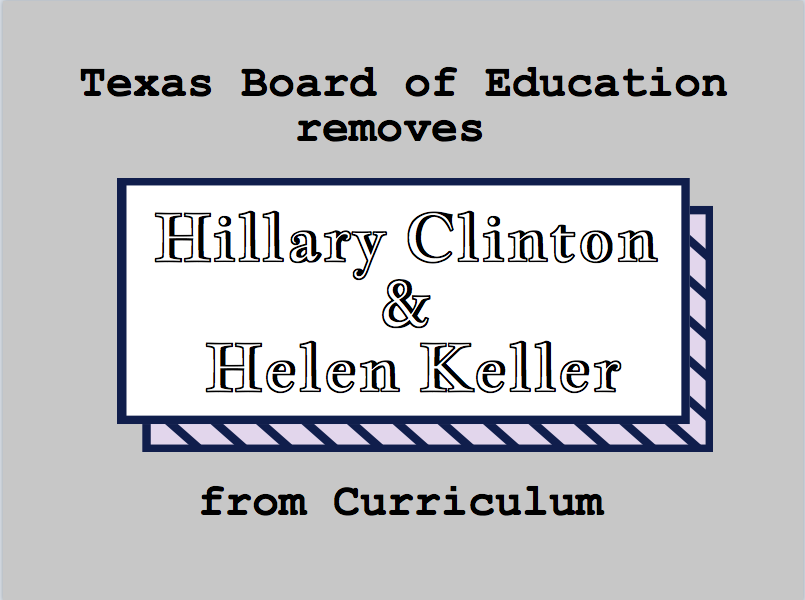 The Texas Board of Education is composed of 140 individuals.

On Friday September 14, 2018, the Texas Board of Education held a preliminary vote for the removal of several historical figures from the state’s curriculum. The controversial removal included names such as Hillary Clinton and Helen Keller.

“I feel the decision is not a good one, especially because schools should aim to capture every aspect of history. Whether they agree with how these influential people affected history or not, it isn’t fair to remove them and their impacts from curriculum,” says Emara Saez (‘21).

A work group consisting of teachers and professors scored each historical figure listed in the Texas curriculum on a scale of zero to 21. Rankings were based on the person’s significance and necessity to be taught. Hillary Clinton scored an average of five and Helen Keller scored an average of seven. Due to their low rankings, both were recommended to be removed.

Clinton was a former U.S. senator, Secretary of State, first lady, and the first female nominee for president from a major party. She also won the popular vote of the 2016 presidential election. Keller was an author and activist for the deaf and blind. She was also the first deaf-blind person to graduate with a bachelor’s degree.

During the preliminary vote, the board also approved a Mexican American studies course. It is the first ethnic class approved by the Texas Board of Education.

“I think it’s great especially for Texas because they have a lot of Mexican heritage. Much of the states culture is driven from Mexico. In Global Studies class we learn of other cultures. It’s great that other students can also learn of cultures relevant to them,” says Julianne Bland (‘21).

The work group also recommended various changes to the current curriculum. Changes  included removing mentions of Moses’ influence on American democracy and changing the main cause of the Civil War to be a states’ rights issue. However, the Board of Education decided only to remove the historical figures recommended.

The board claims that the main reason for figures removal was to save time in the classroom.

According to Donna Bahorich, the chair of the Texas State Board of Education, “History and social studies teachers in Texas schools must perform a daily quickstep if they want to keep up with rigorous curriculum standards that require them to educate children about high-priority topics and key historical figures.”

My op ed in the @washingtonpost on the Hillary Clinton & Helen Keller @TXSBOE history streamlining controversy. Not happy about the title because no disrespect was meant to any "cut" figures. Trying to get to manageable REQUIRED content. #txed #txlege https://t.co/2sv54xGc5J

Bahorich feels that the amount of historical figures taught forces student to focus only on memorization. She advocates for deeper discussions of history rather than broad overviews.

“Texas simply has too many learning standards required to be taught and assessed on state assessments, for educators to cover in a year,” said Bahorich.

However, many Academy students disagree with Bahorich. Junior Meagan Hughes (‘20) believes that excuses given by the board are not valid.

“From what I’ve gathered about the issue, I believe that the problem lies more with the institution of the Texas Board of Education itself than the allocation of time. It appears as though all of the other states find a way to effectively incorporate those figures on Texas’ elimination list. Texas needs to look at how they are executing the curriculum,” says Hughes.

Junior Sam Cuttle (‘20) believes the board is creating more issues by removing the two women.

“Even if the Texas Board of Education thinks one or both of these women are problematic, that doesn’t mean they can take them away from curriculum. What is the true point of taking them away? They are trying to force another propaganda for no reason,” says Cuttle.

SBOE needs to reject these changes. If Helen Keller was an important historical figure when I was in school (and she was), then she still is today. @HillaryClinton is the 1st and only woman to be the presidential nominee of a major party in U.S. history. Enough said. #txlege https://t.co/0aKIHV1Iq8

This is not the first time the Texas Board of Education has sparked controversy. In 2015, the board began using new textbooks which barely addressed racial segregation. The books also did not include any information regarding Jim Crow Law or the Ku Klux Klan. In 2014, textbooks included inaccuracies such as mentions that segregation was only “sometimes” in schools and that the Jewish faith views Jesus Christ as an important prophet. In 2010, the board renamed the American slave trade to the Atlantic Triangular Trade.

“I believe that this decision is a mistake and is going to negatively affect the future generations. They [Texas School Board] are white washing and sugar coating history,” says Tress Jacobs (‘20).

The board of education will caste it’s final vote for the updated curriculum in November.