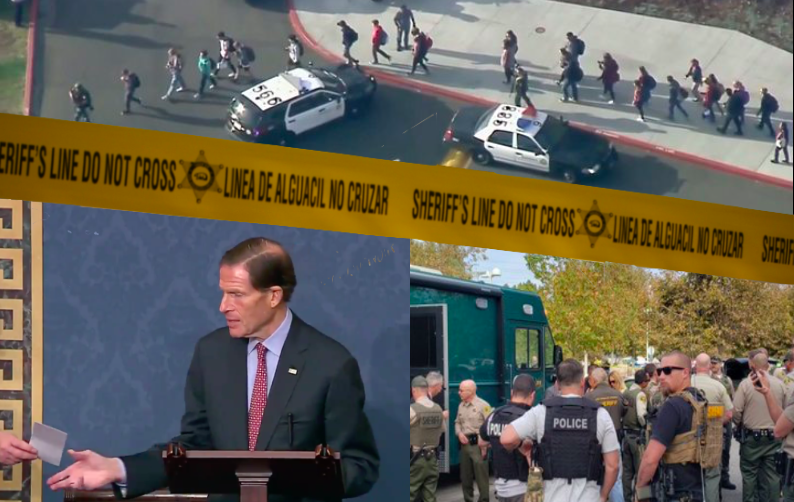 “I feel the media is partially to blame for this. With how widespread their messages are, especially with school shootings, ideas are put into the forefront of people’s minds that weren’t in the past,” says Kaitlyn Lezama (‘21). (Photo Credit: Mei Lamison/Achona Online)

“I feel the media is partially to blame for this. With how widespread their messages are, especially with school shootings, ideas are put into the forefront of people’s minds that weren’t in the past,” says Kaitlyn Lezama (‘21).

On Thursday November 14, two students were killed and several others injured at Saugus High School in Santa Clarita, California.

“Unfortunately I think I’m a little numb to it,” says Hannah Traud (‘20). “You hear about school shootings so much. What makes us so sad and so angry is that we are too young to do anything.”

After the tragic #SaugusShooting, we mourn for those lost today & pray for those in the #SantaClarita community; whose scars won't soon heal. I've already seen hope, and strength through the tears of the survivors, who will hold their loved ones tighter tonight. #saugusstrong pic.twitter.com/LBKjMX9TWF

The suspect, who turned 16 the same day as the shooting, was identified as a male sophomore. According to the Los Angeles County Sheriff’s Department, the boy shot five of his fellow classmates before shooting himself with a .45-caliber semiautomatic pistol.

The shooting began at 7:38 a.m. and lasted for a total of 16 seconds. There we no more bullets loaded in the weapon when it was retrieved by the police.

Six students, including the shooter, were taken to a local hospital. Both a 16-year-old girl as well as a 14-year-old boy died once there. The shooter, along with another student, remain in critical condition.

“I think AHN will agree with me when I say we will be keeping all the victims of this school shootings in our hearts and prayers,” says Julianne Bland (‘21).

Just 45 minutes prior to the shooting, U.S. Senator Cindy Hyde-Smith of Mississippi blocked a motion to hear a background check bill. Senator Chris Murphy of Connecticut, one of the bill’s sponsors, spoke after the block, completely unaware of the events that were currently unfolding in Santa Clarita

Following Murphy, Senator Richard Blumenthal of California spoke on behalf of the blocked bill. Mid-way through his speech on the Senate floor, he was handed a note informing him of the tragedy.

As I was on the Senate floor speaking about the need for universal background checks—after Rs blocked a vote today—I heard this devastating news. To the victims&families, we can't take back the loss&fear you're feeling, but we'll keep fighting to end this epidemic of violence. https://t.co/i3cqgBk1Sm pic.twitter.com/6Mg7L5NtR6

“When I let myself think about what has happened today, I am left feeling scared and angry. There have been so many school shootings so far this year. What if Academy is next? It’s a gory thought, but a shooting doesn’t seem so far fetched now,” says Laura Caroline Jung (’22).

Murphy had reportedly asked the Senate to unanimously pass the background check bill for months prior. “The American public are not going to accept silence from the body week after week, month after month in the face of this epidemic carnage that is happening in this country,” he said.

“I think this shooting, like many other shootings, could have been prevented with stricter gun laws,” says Isabella Ruano (‘21). “Currently, people are not being taught to communicate with each other in a civil manner and this lack of civility escalates to extremes such as this.”

Following shootings in El Paso, Texas, and Dayton, Ohio, House Democrats worked to advance three additional gun reform bills this September. However, Murphy stated he has yet hear back from the Trump administration of their status.

“It’s really sad that I’m so desensitized to hearing about these tragedies. School shootings seem like a weekly occurrence. We offer our condolences and prayers for a day or two before returning to our everyday lives while absolutely nothing is done. No real and long lasting change is implemented. As a student, It’s exhausting to witness all these shootings occur and government officials refuse to do anything about it. It’s clear that NRA money is valued over the safety and well-being of schoolchildren,” says Chloe Moussa (‘20).