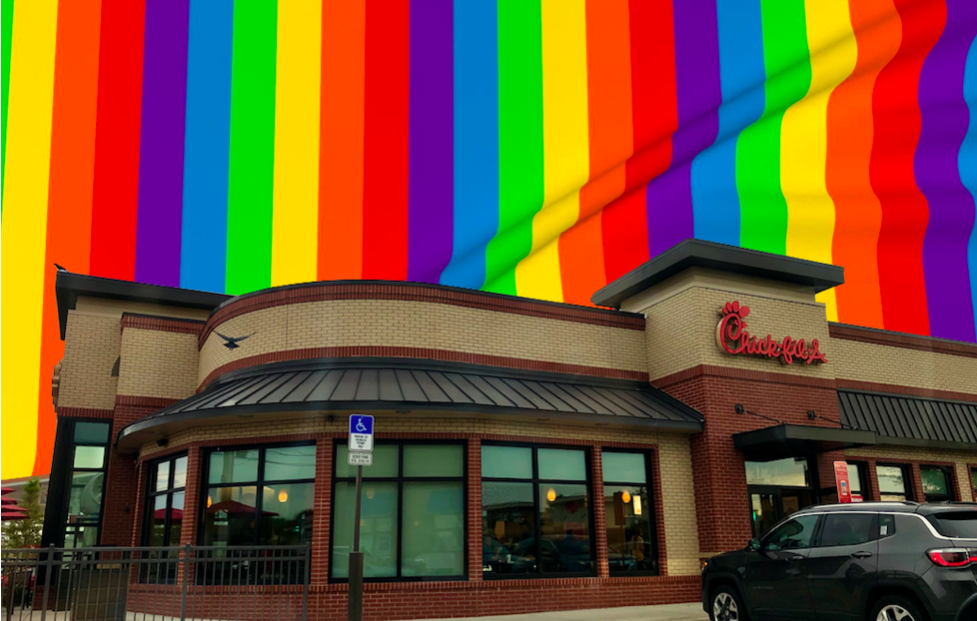 “I think it’s horrible that a company that is supposed to be religious, is using its money to instigate violence instead of say promoting peace,” says Isabela Mocsari (‘20). (Photo Credit: Mei Lamison/Achona Online)

“I think it’s horrible that a company that is supposed to be religious, is using its money to instigate violence instead of say promoting peace,” says Isabela Mocsari (‘20).

The Truth Behind Chick-fil-A

Chick-fil-A, the third largest grossing restaurant chain in America, has once again sparked attention in the media for their anti-LGBTQ history. Two critical tweets accusing the company of ties to anti-gay legislation in Uganda and to President Donald Trump’s re-election campaign have resulted in public outcry. As a result of the posts, the hashtag #boycottchickfila has recently trended on social media platforms such as Twitter, Instagram, and Facebook.

“I love Chick-fil-A’s food so much, so boycotting it was a hard decision for me. Since learning that they donate money to organizations that discriminate against LGBTQ+ people, I have decided that I do not want to contribute as a customer to the money that they donate, which is why I am boycotting,” says Evelyn Martinez (A‘18).

The movement to boycott is partially due to fast food chain’s affiliation with the organization National Christian Foundation (NCF).

If you eat at Chick-fil-a, this is what your money goes to.

Chick-fil-A and the NCF are connected through the WinShape Foundation, as WinShape provides and receives millions of dollars of funding for both organizations. Additionally, WinShape was created by Chick-fil-A’s founder Truett Cathy.

The NCF first gained attention in 2014, after the Uganda Anti-Homosexuality Act was passed by the Parliament. The law, also known to social media as the “Kill the Gays Bill,” imposed the death penalty as punishment for homosexuality.

While Uganda’s Constitutional Court struck down the Anti-Homosexuality Act in August of 2014, the government announced this past October it it plans to resurrect the failed act. The bill, supported by President Yoweri Museveni, is said to be re-introduced in parliament in the next few weeks and voted on before the year’s end.

The NCF has funded multiple anti-LGBTQ projects in Uganda, and have thus been partially credited by the public for the renewing of this law.

The UK’s first Chick-fil-A is set to close just a week after opening following sustained pressure from “LGBT activists”.

On October 10, 2019, Chick-fil-A opened its first location in Europe. However the Edinburgh restaurant announced nine days after its opening that it would close its doors within six months. Protests regarding the restaurant’s ties to the Uganda law are to blame.

“I think it’s sad that people don’t consider what Chick-fil-A does just because they don’t want to give up their food. It’s absolutely ridiculous,” says Anna Reins (‘22) who has boycotted Chick-fil-A for over a month. “I’m glad the people of Edinburgh stood up for what is right.”

In the wake of Trump’s 2020 re-election campaign, many on twitter have voiced their opposition to the chicken restaurant and it’s ties to the president. This following is a vial tweet from August 8, which listed a variety of fast food chains accused of donating to the Trump campaign.

So if you see me starting to get thinner and toned don’t ask me why.

“I think it’s pretty clear as to why Chick-fil-A would donate to the Trump campaign without even having to say it. Chick-fil-A is known organization that disfavors gay rights. Mike Pence is in opposition to policies in favor of gay rights, funding for HIV/AIDS, and any program in support of LGBT youth,” says Sam Cuttle (’20). “Honestly, it really upsets me seeing organizations and individuals using their religion, in this case Christianity, to defend their own hurtful and discriminatory agenda.”

The restaurant’s notorious relationship with the LGBTQ community dates back many years.

In 2010, the Cathy family donated more than $1.9 million to anti-gay groups. The 2012 donations break down specifically to $1.1 million gift to the Marriage & Family Foundation, $480,000 to the Fellowship of Christian Athletes, and $1,000 to Exodus International which all fund anti-gay initiatives and conversion therapy.

In the wake of the 2013 Supreme Court Case Obergefell v. Hodges, Chick-fil-A CEO Dan Cathy said “we’re inviting God’s judgment on our nation when we shake our fist at him and say we know better than you as to what constitutes a marriage. And I pray God’s mercy on our generation that has such a prideful, arrogant attitude that thinks we have the audacity to redefine what marriage is all about.”

I’d rather my food without a side order of homophobia #BoycottChickFilA https://t.co/gm5ltrN4Y5

“It makes sense they wouldn’t be in support  gay community considering they are a Christian company rooted in their beliefs,” says Rachel Brown (‘20).

Chick-fil-A’s stances on same-sex relations seem to stem from their religious background. According to their official website, the company’s corporate purpose is to “to glorify God by being a faithful steward of all that is entrusted to us and to have a positive influence on all who come into contact with Chick-fil-A.”

“I think Chick-fil-A’s corporate stance is hypocritical of the company’s actions Why would you hurt so many people if you are a Christian?” says Megan Smolarick (’20).

The controversy has expanded to television, with NBC’s comedy “The Good Place,” indirectly mentioning Chick-fil-A in its third season. “There’s this chicken sandwich that if you eat it, it mean you hate gay people – and its delicious,” says main character Eleanor Shellstrop, who is played by Kristin Bell.

While the controversies surrounding the business may be hurting its international expansion, the company has faced little repercussions at home. On average, a Chick-fil-A franchise location brought in $4.6 million in annual sales in 2018, which is a $4.2 million increase from last year. The restaurant is on track to overtake McDonalds as the highest grossing food chain in the US by 2020.

“People want change but they don’t want to give up things that are comfortable in order to invoke that change,” says Latin teacher Ariana Newman “Chick-fil-A can do anything they want with their money. If you strongly disagree with what they are doing, then consider not giving them your support.”

As of Nov. 18, Chick-Fil-A will no longer donate to the Salvation Army or the Fellowship of Christian Athletes (FCA). “Going forward, Chick-fil-A said it will work exclusively with organizations that focus on education, homelessness and hunger.”