Pedestrian Killed in Crash Outside Academy 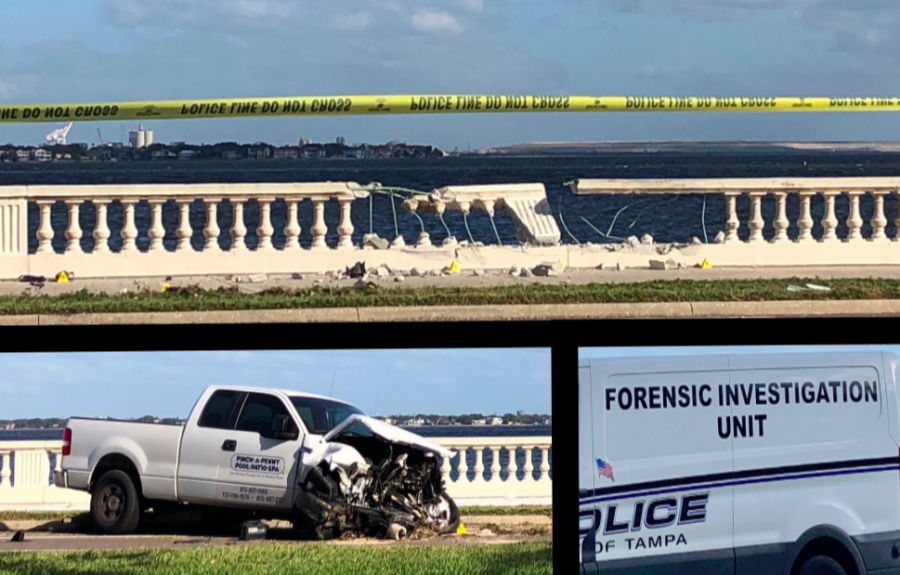 On Jan 9 during set one, students in Academy’s Bayshore building heard a loud clash.

Around 11 a.m. a Pinch-a-Penny truck crashed into the Bayshore Boulevard wall, hitting a pedestrian.

The collusion occurred right outside of Academy at the intersection of West Julia and Bayshore Boulevard. Both streets are currently closed.

Tampa Police stated the the pedestrian was transported to the hospital in critical condition.

“I was in Social Justice when it happened. The entire class heard everything. A few minuets later, there were fire trucks and ambulances. It was scary,” said Megan Smolarick (’20).

According to WFLA 8 On Your Side News, dive crews were seen attempting to rescue a person in the water. A hazardous materials team was also seen cleaning up pool chemicals spilled from the truck during the crash.

Northbound Bayshore Blvd is currently closed as Tampa Police investigate a #traffic accident with critical injuries involving a pedestrian. Please use alternate routes at this time.

Specific details and circumstances are not yet clear.

A breaking Tampa Bay Times article reported the pedestrian was killed. It is still unclear, however, if the victim died on the scene. The pedestrian has not yet been identified.

A University of Tampa student and another bystander jumped into the water in an attempt to save the victim. Police are now investigating the speed of the truck and whether or not alcohol was a factor.

According to eyewitness accounts, the truck was traveling 60 to 70 mph. Bayshore’s speed limit is 35 mph.

Firefighters arrived 12 minutes after the crash. Both the pedestrian and driver were taken to the hospital.

The driver of the Pinch-a-Penny truck is expected to survive. Tampa Police stated the collision is now being investigated as a DUI traffic fatality.

The victim has been identified as an adult male.

The driver has been identified as 31-year-old Benjamin Ehas. Last night, he was arrested and charged with vehicular homicide and DUI manslaughter.