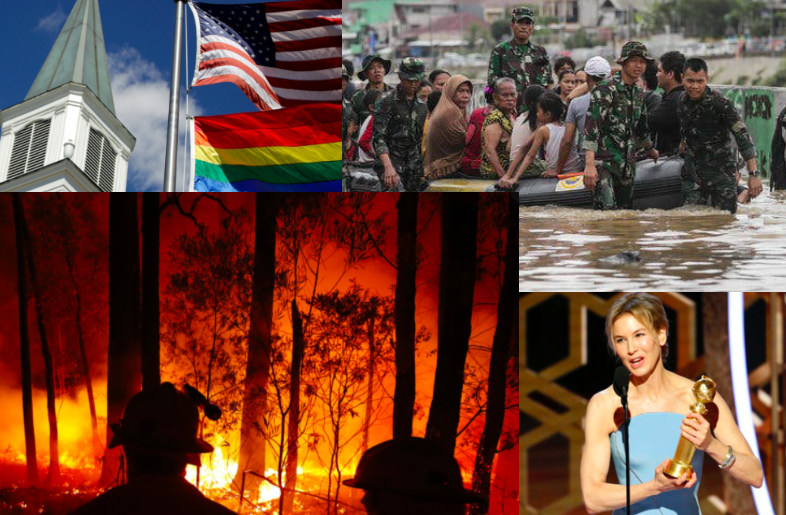 Regarding the Roe v. Wade amicus brief, Anna Reins (’22) said, “I knew that abortion was very politicized, but i think that encouraging the supreme court to overturn a recent ruling is very foolish.” (Photo Credit: Mei Lamison/Achona Online/Piktochart)

Regarding the Roe v. Wade amicus brief, Anna Reins (’22) said, “I knew that abortion was very politicized, but i think that encouraging the supreme court to overturn a recent ruling is very foolish.”

What You Missed Over Christmas Break

From climate crises, to award shows, to increased international conflict, here are the main things you missed over Christmas Break.

On Jan 3, an executive ordered U.S. airstrike killed Iranian military leader Qasem Soleimani at a Baghdad airport. The general, who was the head of the Islamic Revolutionary Guards Corps, was among the most powerful men in Iran.

Secretary of State Mike Pompeo said the attack saved U.S. lives, as the Pentagon blames Soleimani for previous attacks. Critics, however, claim President Trump’s decision was an act of war.

Iran’s Supreme Leader, Ayatollah Ali Khamenei, vowed for “harsh revenge.” According to CNN, the U.S. is sending thousands of additional troops to the Middle East in response.

The United States just spent Two Trillion Dollars on Military Equipment. We are the biggest and by far the BEST in the World! If Iran attacks an American Base, or any American, we will be sending some of that brand new beautiful equipment their way…and without hesitation!

Australia is currently consumed by massive wildfires intensified by recoder temperatures and drought. While bush fires are annual, the current conditions are extreme and predicted to last for months.

On Jan 4, Sydney reached its hottest day ever on record at 120 degrees. The city of Canberra set a record high with a 110 degrees.

“These fires were caused by climate change. Even though there is science proving this, politicians and the rich reject the idea in order to keep themselves up in society and loaded with money. There have been several crises caused by climate change in 2019, but barely any steps have been made by the ones with the influence to really help our earth. They only continue to place the burden on the general public while they use their money to keep themselves and their families afloat,” said Sahar Bueno-Abdala (’21).

According to the BBC, at least 25 people and millions of animals have died since September. According to the Washington Post, more than 1,000 buildings have been lost and 10.1 million acres burned.

Woke up to the smell of smoke this morning without even opening our windows. This is Melbourne right now. From fires FOUR HOURS AWAY. My heart is broken for our country. 🇦🇺 #AustralianFires pic.twitter.com/dXV8qGq29B

Beginning New Years Eve, Indonesia’s capital has faced extreme flooding and landslides. As of Jan 7, 66 people have been reported dead and more than 173,000 residents displaced.

While some flooding has subsided, thunderstorms are expected to continue. According to CNN, Jakarta is expected to receive 4 inches of rain in the next few days.

“While I do agree the Australia Wildfires should receive media coverage, I believe equal coverage should be given to the Indonesian Floods as well. I’ve seen celebrities and influencers raise money and awareness for Australia, but I haven’t seen anything regarding Indonesia,” said Victoria Fuentes (‘20).

At least 42 people are dead and more than 400,000 people have fled their homes after intense rain and flooding in greater Jakarta, Indonesia pic.twitter.com/UE8p9NclAn

Major awards from the event include:

“I always enjoy watching the golden globes,” said Sam Cuttle (‘20). “That being said, I was really disappointed with the lack of diversity this year. Not one female director was nominated despite all the amazing women directed films that came out this year.”

"When it is time to vote, please do so in your own self-interest. It’s what men have been doing for years, which is why the world looks so much like them."

"We are the largest voting body in this country. Let’s make it look more like us.”

On Jan 3, the United Methodist Church announced a proposal to split the denomination in regards to same-sex marriage.

“It is upsetting to see a church split over an issue like this. Why can’t we just all accept the LGBT community and same-sex couples as they are?” said Tress Jacobs.

🚨 Major news for the United Methodist Church. While this schism will be painful for many, I believe (as someone who left the UMC over being banned from ordination) this is ultimately great news for LGBTQ Methodists who will now be able to serve and participate fully. https://t.co/Vxr3F2Ej7z

The brief was filed on behalf of the defendant in “June Medical Services v. Gee.” The case refers to a 2014 Louisiana law that requires hospital admitting privileges for abortion clinics.

“Honestly, it kind of frightens me that 200 congressmen signed to overturn a fundamental court case that guarantees women’s rights. With Roe v. Wade already being such a controversial decision, and with states challenging it and attempting to ban abortion, having lawmakers sign an amicus brief to the Supreme Court is definitely not reassuring that women will be able to maintain this right in our country for much longer. I hope that the Supreme Court thinks hard about this and hopefully, the overturning of Roe v. Wade will never become a reality,” said Kara Petitt (’20).

“I am very happy to see movements towards protecting life before birth. With March for Life taking place at the end of the month, it is great to see congress taking more steps to try to relieve past issues. Reading about the brief  has exposed me to some of the horrific trauma that potential mothers went through,” said Cassie Hiatt (’22).

We see you doing everything you can to strip away our rights.

We promise you. We will do everything we can to take away your job. https://t.co/XNSTIOzHgO

On Dec 29, a gunman opened fire in West Freeway Church of Christ in White Settlement, Texas. The gunfire occured around 11 a.m. during a service.

Two people were fatally shot before the church’s security team shot and killed the gunman. According to the Texas Department of Public Safety, the shooter was 43-year-old Keith Thomas Kinnunen.

The gunman who fatally shot two worshippers inside a church had an arrest record in Arizona, New Jersey and Texas, including domestic violence.

Texas does not require a background check or permit on the long gun he used in the shooting. #txlege https://t.co/mUOkmD9QUI

On Dec 28, five people were stabbed at a rabbi’s home in New York as they gathered to celebrate the seventh night of Hanukkah. The stabbing occurred around 10 p.m. at 47 Forshay Road in Rockland County’s Monsey.

The suspect, Grafton Thomas, 37, was later arrested by the NYPD. He currenly faces five counts of attempted murder and one count of burglary.

Andrew Cuomo, Governor of New York, said the event was, “violence spurred by hate. It is mass violence and I consider this an act of domestic terrorism.”

The man accused of stabbing people in a rabbi's home in Monsey, New York, during a Hanukkah celebration has been indicted on attempted murder and assault charges https://t.co/FT0Qot1oB3 pic.twitter.com/JRJNTxkzKI