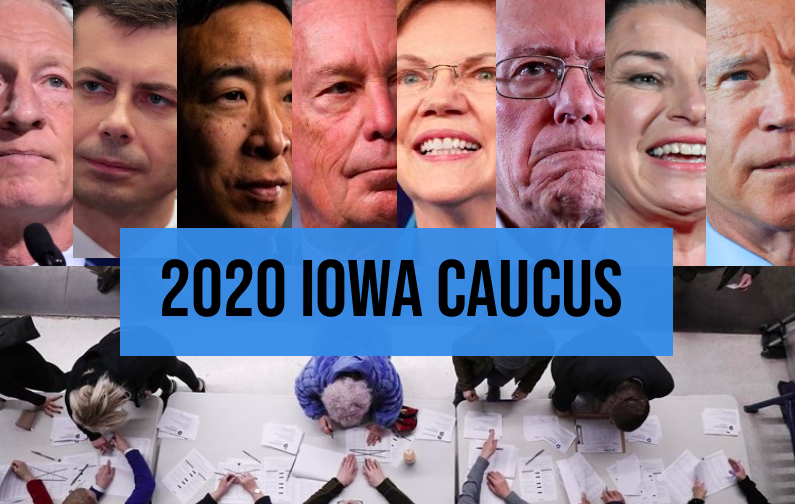 This year, the Iowa Caucus fell just after the Super Bowl, just before the State of the Union Address, and during the impeachment of President Donald Trump. (Photo Credit: Mei Lamison/Achona Online/Piktochart)

This year, the Iowa Caucus fell just after the Super Bowl, just before the State of the Union Address, and during the impeachment of President Donald Trump.

On Feb 3, 2020, all eyes were on Iowa as the first caucuses of the Democratic Presidential Primaries took place. The attention, however, was met with chaos and confusion as results were delayed into Tuesday, Feb 4.

“It’s a mess and because it’s a mess, people are starting to lose trust in the system,” says history teacher Beth Chase.

This is a total mess. I respect the people of Iowa, they’ve been great—but it’s become very clear that our democracy has been misserved by a broken system. #IACaucus

This year, in an attempt to avoid inaccuracy, the Iowa Democratic Party had precincts report caucus results through a mobile app. However, Troy Price, chairman of the party, stated last night delays were a result of the app’s “coding issues.” Iowa officials have stressed problems do not stem from hacking.

In addition to the app, the Iowa Democratic Party set a series of new rules for the caucuses, increasing confusion among precincts and participants.

Early Tuesday morning, a spokeswoman for the Department of Homeland Security, offered to test the app for the, but Iowa leaders declined.

The same app is set to be used for the Feb 22 caucuses in Nevada.

Never use an app for a thing that can be done without an app.

As of noon today, the Iowa Democratic Party has promised 50% of the results by no later than 5 p.m. According to the Washington Post, official staff have been sent to collect paper ballots from precincts in person.

Despite the delays, many of the presidential hopefuls addressed their supporters late Monday and into early Tuesday. Most of them thanked their crowds for their support and then shifted the topic of discussion towards future primaries.

Biden’s campaign, however, released a letter to the Iowa Democratic Party leadership “requesting full explanations for the failures before any official results are released.”

Mayor Pete, on the other hand, claimed victory for himself.

You can’t make this stuff up: Pete Buttigieg comes out at 12:20 in the morning and claims victory in Iowa with a whopping 1.9% of the vote total released. #IowaCaucusDisaster @PeteButtigieg

The chaos and confusion provided an opportunity for many to speculate the credibility of the entire process.

Brad Parscale, Trump’s reelection campaign manager, suggested the caucus was “rigged.” He wrote, “Democrats are stewing in a caucus mess of their own creation with the sloppiest train wreck in history.”

Criticisms came from both sides of the political spectrum. Democratic Representative Ilhan Omar tweeted Tuesday, suggesting the app’s developer was tied to Buttigieg’s campaign. Following the tweet, “Mayor Cheat” was trending on twitter.

The Washington Post reports additional campaigns paid for services from the app’s company, including Biden and Senator Kirsten Gillibrand who dropped out of the race in August.

“With the extreme feelings surrounding this upcoming election, the stakes are too high to mess anything up. When it comes to a political process like a caucus, in short, it has to be perfect. Now is the time to make sure all of your ‘t’s are crossed and ‘i’s are dotted,” said United States history teacher Lori Kearney.

Democracy dies in the darkness! #IACaucus

As of 2 p.m. results have still not been released. Currently, it seems the candidates have moved on from last night results. Most of them have already left for New Hampshire where the next primary is set to take place.

“People only really pay attention to the Iowa caucuses because they are the first ones,” said Chase. “Also, Iowa doesn’t reflect the makeup of the entire country, the population their is 90% white,”

To put the situation in perspective, there are 41 delegates candidates can gain in the state. Candidates’ must earn at least 1,991 delegates to win the presidential nomination.

Live on CNN, Price stated he had no knowledge of the Department of Homeland Security’s offer. 62% of the precincts have been reported. He did not comment on the remaining data nor did he provide a time frame for when they will be released.

71% of Iowa precincts are now reporting, but no winner has been declared. Sanders and Buttigieg are fighting for first.

75% of Iowa precincts are now reporting, but no winner has been declared. Sanders and Buttigieg are fighting for first.

92% of Iowa precincts are now reporting.

99.94% of Iowa precincts are now reporting, however Iowa Democratic Party Officials have still not announced the official winner. Sanders and Buttigieg are separated by 0.01% in the race for first.

On Thursday, Feb 6, DNC Chairman Tom Perez called for an immediate “recanvass” of Iowa. Many others in the state are calling for a recount.