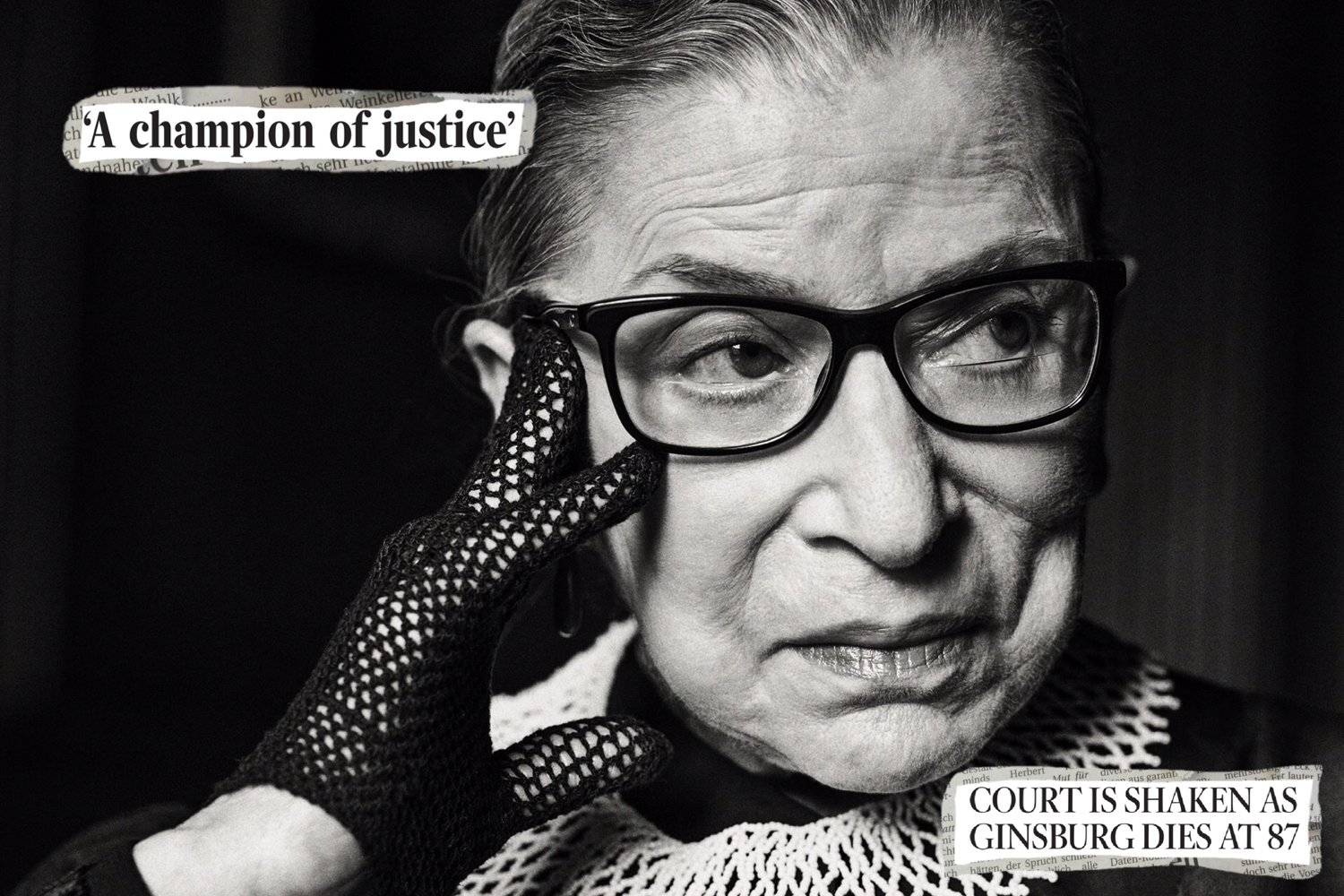 “My mother told me to be a lady. And for her, that meant be your own person, be independent.” – Ruth Bader Ginsburg (Chloe Mintz/ Achona Online/ Canva)

“My mother told me to be a lady. And for her, that meant be your own person, be independent.” – Ruth Bader Ginsburg

The Notorious RBG: The Lasting Legacy of A Political Icon

“Honestly, I think the death of Ruth Bader Ginsburg is heartbreaking. The work she has done for all the women in this country is astounding. She is the reason why women in this country can live and be free without a man breathing down their neck. Personally, she was the ultimate example of a strong woman who, in a sexist society, persevered,” says Allie Ragano (‘24).

Associate Justice of the Supreme Court, Ruth Bader Ginsburg, lost her arduous battle with metastatic, pancreatic cancer the evening of Friday, Sept. 18. Ginsburg, who had initially been diagnosed with colon cancer in 1999, relapsed this past July when a developing tumor had been discovered on her liver.

Of course, Ginsburg’s final moments had been spent in preparation for the day’s to come— both the 2020 Presidential Election and the persistent discriminatory trials alike.

Much like the teenager she’d been at James Madison High School, Ginsburg had believed every cause worth living for.

Having grown up within a low income household, Ginsburg understood the utility of a collegiate education. Excelling throughout secondary school, she received a full scholarship to Cornell University where she was named first in her class.

In 1956, Ginsburg readily entered Harvard Law School with her husband Martin at her side. Nearly two years into her tenure, she transferred to Columbia Law on account of Martin’s newfound position at the New York based law firm, Weil, Gotshal & Manges. To the surprise of none, Ginsburg was nominated to the Columbia Law Review and tied for first in her class.

In spite of such accolades, Ginsburg struggled to secure a position with one of the twelve law firms that had offered her an interview.

Ginsburg herself had attributed the shortage in opportunities to her being a mother: “The fear was that I would not be able to devote my full mind and time to a law job.”

It was only with the help of Gerald Gunther, a professor of Ginsburg’s while at Columbia, that she was employed as a clerk to the U.S. District Court for the Southern District of New York in which she served for two years.

Ginsburg, who had “developed an academic passion for civil procedure” as an associate director of Columbia’s Project on International Relations, then became a professor at Rutgers Law School in 1963.

Announced via the “New York Times” as a “major coup,” Ginsburg had accepted an appointment to Columbia’s faculty as the first female tenured professor of law just nine years later.

While on staff, Ginsburg co-founded the American Civil Liberties Union’s (ACLU) Women’s Rights Project in an attempt to challenge established laws predominantly in favor of men. In turn, she successfully argued six landmark cases before the U.S. Supreme court and adjudicated more than 300 sex discrimination cases on behalf of the ACLU.

In 1980, President Jimmy Carter elected Ginsburg to the U.S. Court of Appeals for the District of Columbia Circuit in which she served for thirteen years.

Receiving a nomination from Bill Clinton in 1993, Ginsburg pursued her relentless toil towards gender equality as a Justice of the Supreme Court.

In apprising the public of his decision, Clinton made sure to commend her ability to spearhead such radical (if you will) labors on behalf of both women and underrepresented individuals: “She has compiled a truly historic record of achievement in the finest traditions of American law and citizenship.”

As both a young woman on the cusp of adulthood and a recipient of single-sex education, Ginsburg’s efforts to destigmatize female schooling and a woman’s prevalence within the workforce hit rather close to home:

At fourteen I’d learned otherwise. My learning of Ginsburg had proved to me otherwise.

Women can be both refined and intelligent. Demure and assertive. Motherly and tenacious.

It is a privilege to give birth, but it is not a woman’s sole purpose.

I will not pretend to have my life figured out— frankly, I do not believe it’s expected of me to have much of anything figured out— yet I very much intend to be a competent woman independent of societal expectations.

Thank you, RBG. Thank you for challenging the status quo so that others may follow in your wake.

May you rest in power.