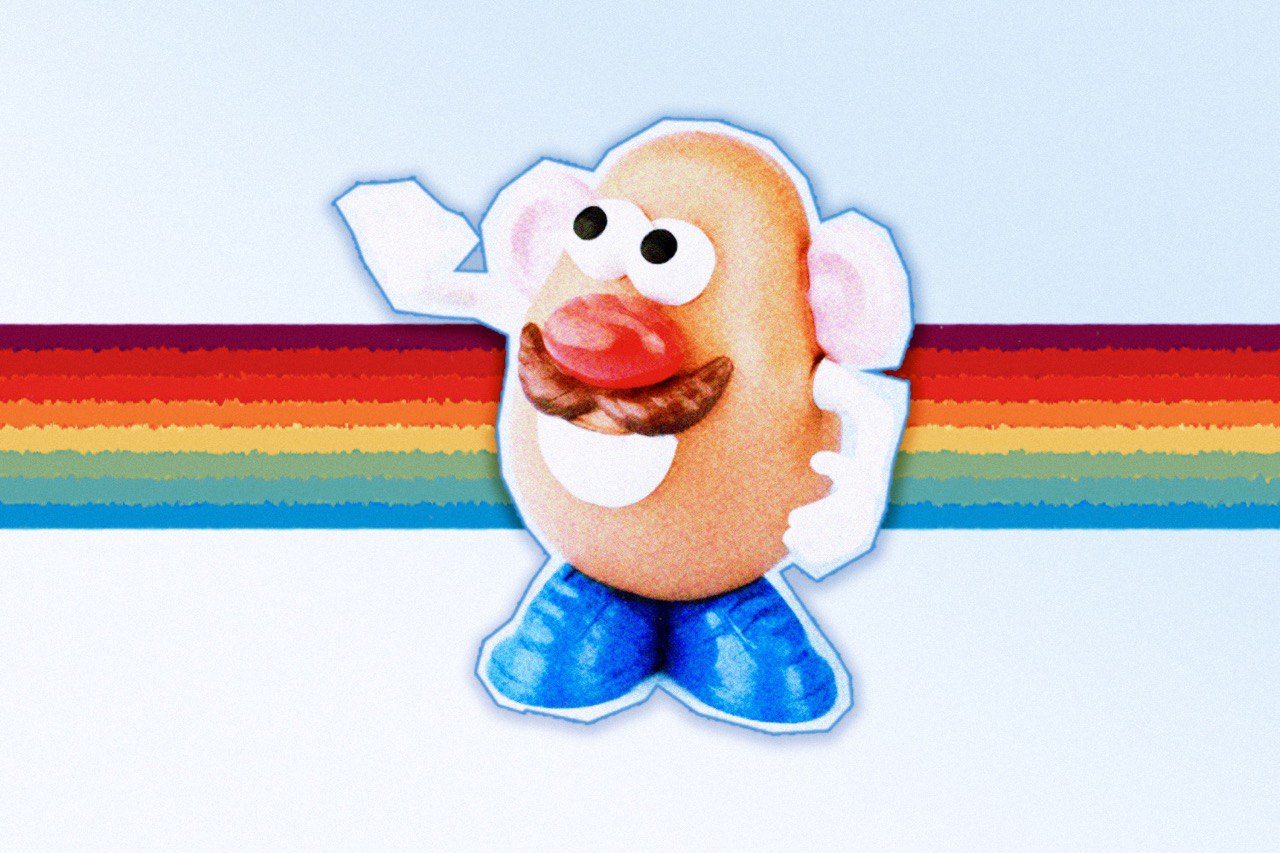 Mr. Potato Head, Hasbro’s iconic character, is taking big steps towards inclusivity after nearly 70 years. But as a name change stirs controversy, the question is asked: what is the point? ((Photo Credit: Maddie Glaum/Adobe Photoshop/Achona Online))

Mr. Potato Head, Hasbro’s iconic character, is taking big steps towards inclusivity after nearly 70 years. But as a name change stirs controversy, the question is asked: what is the point?

After nearly 70 years, over 100 million sales, an induction into the National Toy Hall of Fame, a TV show, a few Super Bowl commercials, and a supporting role in “Toy Story”, the reign of Hasbro’s beloved Mr. Potato Head is over. Well, sort of.

These speculations originated after Hasbro, the maker of the Mr. Potato Head toys for the past 69 years, announced on Feb. 25 that they would be removing the “Mr.” from the Mr. Potato Head brand, becoming simply Potato Head. This was done to “better reflect the full-line of potato head products.”

This “full-line” is in reference to a new Potato Head kit called “Create Your Potato Head Family,” which comes with two large potato bodies, one small potato body, and 42 male, female, and gender-neutral accessories. The kit, as stated by Hasbro, is “a celebration of the many faces of families, allowing kids to imagine and create their own Potato Head families.”

With promotional photos that feature potato families with two moms or two dads, it goes without saying that the kit is meant to promote inclusivity while challenging children’s idea of heteronormativity at a young age. Unsurprisingly, Hasbro was met with backlash — consumers “canceled” Mr. Potato Head while Fox News host Sean Hannity invited Geraldo Rivera and Don Bongino on air to discuss the “controversy and confusion” created by Hasbro’s decision to rebrand the toy. Some members of the LGBTQ+ community themselves even regarded the change as an unnecessary attempt at corporate empathy.

“At first glance, the whole Potato Head controversy just seemed like a marketing ploy by Hasbro to sell their product by being controversial. When companies do that, it makes the LGBTQ+ community look bad by painting the picture that they had an issue with a harmless toy, when in reality, nobody asked for this,” says Meredith Nitchals (’21).

Despite Hasbro’s statement that Mr. and Mrs. Potato Head themselves weren’t going anywhere and that the only change would be the brand name, news outlets continued to project the rhetoric of what journalist Jill Filipovic refers to as “Hasbro’s left-wing attack on traditional families and the traditional family structure.” Consumers continue to question the necessity of the name change and attack Hasbro for jumping on the bandwagon trend of progressivism.

Bandwagon or not, this change is anything but trivial.

Inclusivity within toys is a topic that, although often overlooked, is essential. Kids play with toys during the developmental stages of childhood, a time where children are greatly shaped by their surroundings including the toys they play with. The most notable example of toy-influence is Barbie, the white, blonde, skinny, seemingly “perfect” doll who is responsible for the unrealistic beauty standards that girls hold themselves to even today.

Barbie’s widespread popularity accidentally contributed to the pro-white biases associated with beauty and success — in one study, Black and Hispanic children aged four to six were shown two dolls, one white and one of their race, and were asked to point to the one they preferred more. All indicated the white doll over the doll of their own race.

Labeling Barbie, the most popular doll available on the market, as the standard of beauty for women is detrimental as long as the name “Barbie” is associated with a skinny, blonde, white woman. Fortunately, Mattel has recently rebranded Barbie as more body-inclusive and racially-diverse; not only are there plus-sized, amputee, wheelchair-bound Barbies, but also Black, Hispanic, Asian, Indian dolls, alongside dolls with vitiligo, Albinism, and hair loss.

“I think it’s really important that toys are inclusive. Seeing every kind of child represented in a toy is a great way for making every child feel accepted from a young age,” says Brooke Kubiak (‘21).

Mattel continued its movement towards toy inclusivity in 2019 with Creatable World dolls, which are customizable and gender-neutral. Alongside representing a variety of ethnicities, these dolls have short and long hair options and come with clothes that are both male- and female-presenting.

Today is Barbie's birthday and to celebrate we want to introduce you to Mattel's #CreatableWorld line of gender inclusive dolls!
"In our world, dolls are as limitless as the kids who play with them. Let’s keep labels out and invite everyone in." https://t.co/PYFpMjqmlE pic.twitter.com/GIeBgldbvN

While Mattel has taken steps toward racial and gender inclusivity, Hasbro’s Potato Head fills in the gaps with LGBTQ+ representation. With the “Create Your Potato Head Family” kit, children have the option and are encouraged to create families that don’t reflect the heteronormative, an opportunity they wouldn’t have necessarily gotten before. As over 4 million children in the U.S are being raised by a same-sex couple, with that number growing by the year, it’s important at an early age to familiarize children with the idea that not all families look the same.

“I think it’s important for kids, especially at a young age, to be exposed to all types of toys because in their lives they’re going to be exposed to all types of people. Prejudices can start when kids are really young based on what they watch on TV, what types of toys they play with, and who those toys are marketed towards. Toys that make the effort to represent and cater to every kind of child really help to eliminate those prejudices before they start, and show that everyone deserves to be represented,” says Nitchals.

https://t.co/Ou3TtYeY9L 👏🏻 "By offering a toy that exists outside of the binary of male and female, Hasbro is helping kids to simply see toys as toys, which encourages them to be their authentic selves outside of the pressures of traditional gender norms…"

While Potato Head’s new kit is important for promoting inclusivity, it’s breaking barriers in another way: gender stereotyping in the toy aisle. It’s no secret that the toy sections in American stores segregate the blue “boy toys” from the pink “girl toys.” The labeling of toys as “for” one gender or the other fosters gender inequality and labeling in society; girl toys focus mostly on motherhood, glamour, and house care, which conditions them to believe those things as their role in the world.

“I absolutely despise toys being labeled by gender! Even if they are not explicitly said to be for girls or for boys, anyone could tell from the packaging: the color, graphics, or the kids on the box. I think this can be very impressionable to younger kids as they’ll grow and feel expected to want to do the activities labeled ‘for them,’ or not have a chance for other opportunities for the same reason,” says Claire Wong (‘22).

The labeling of certain toys as for girls also discourages girls from wanting to explore the territories of the “boy toys,” which tend to foster spatial and cognitive development through creative STEM-promoting toys like LEGO. Because girls lack toys that promote STEM and spatial development, they find themselves discouraged from entering male-dominated fields like engineering and computer science, perpetuating the gender gap in STEM and beyond.

Studies have shown that as soon as 24 months of age, children are able to define themselves as boys or girls, and have rigid definitions of how each should behave by the age of five. Because of the toys they are presented with and restricted to, children are aware of what society expects from them — girls should be mothers and care about how they look, and boys should do the “heavy-lifting” and solve all the world’s problems without fostering loving relationships and expressing their emotions.

“I wish toy companies would be inclusive of both boys and girls for all toys. For instance, a rocket kit could have a girl building it on the package. Or a boy taking care of a doll on another package. Hopefully toy brands will consider how they want to expose the future generation to new activities for the world’s benefit. I imagine that the next Elon Musk would be a woman who was inspired by a robot building kit she used as a child,” says Wong.

While not a large change, the removal of the “Mr.” from the Potato Head brand takes a step in the right direction towards gender neutrality in the toy aisle, as it removes the notion of the toy being “for boys.” This would reap benefits for both boys and girls — the ability to creatively mix and match features and accessories on each Potato Head can foster the creative expression characteristic of boys toys, while the ability to create a family would tap into the relational and emotional aspects of girls toys. Exposure to both of these components in a toy, with the added potential for LGBTQ+ representation, is beneficial for all children, especially in the developmental stages of their life. They’ll learn early on that kids and families come in all shapes, colors, and sizes, and that it’s okay to be themselves.