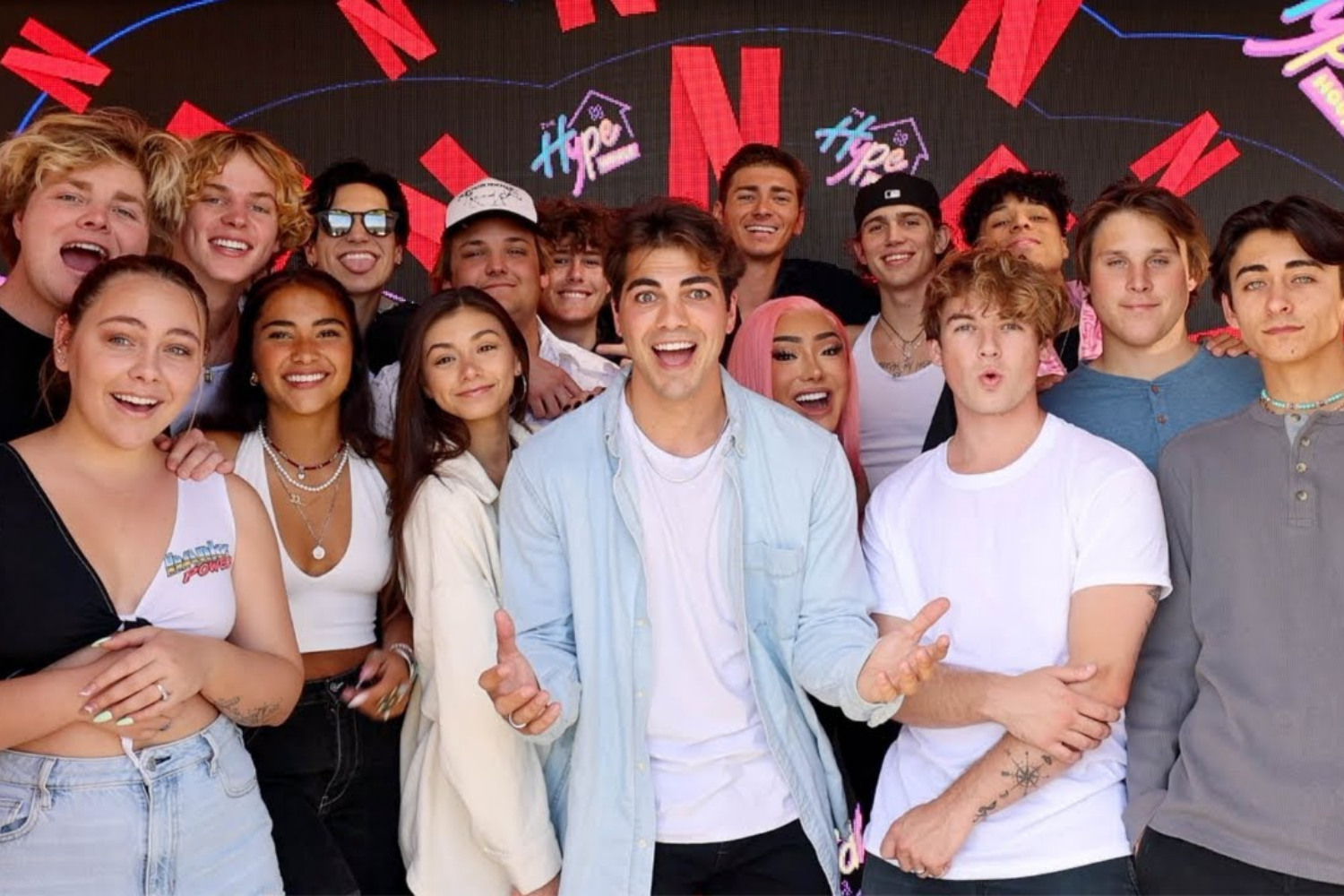 “I did watch Hype House while I was quarantining and had exhausted all of the other options on Netflix. I knew YouTubers and TikTokers existed, but this was an eye opening experience…and not in the best way,” said English teacher Sara Moses. (Photo Credit: Olivia Payne/ Canva)

“I did watch Hype House while I was quarantining and had exhausted all of the other options on Netflix. I knew YouTubers and TikTokers existed, but this was an eye opening experience…and not in the best way,” said English teacher Sara Moses.

On January 7, 2022, Netflix released a reality show based on the only surviving TikTok content house — The Hype House. The Hype House may have filmed the series to prove that they still have popularity, but the only thing this show has demonstrated is that they have not had the hype in a while, and they will never get it back.

this is literally the description of the hype house show on imdb LMFAOOOOOO pic.twitter.com/BoqoAQNnzZ

The series attempted to portray co-founder Thomas Petrou as the protagonist of the show, as he struggled to keep everyone in the Hype House together and get them to participate. However, fans were surprised when co-founder Chase Hudson took to Instagram Live to share that the storylines were edited to villainize him. In the series, Petrou claimed that Hudson suddenly moved into a new house and made him pay for it, but Hudson denied these claims and stated that he paid for the house himself. This was not the only altered storyline. Hype House member Larray stated he was promised that his positive Covid-19 test would not be a part of the shows’ plot, yet the producers fabricated drama between Larray and beauty influencer Nikita Dragun due to the test to make a plot point in the early episodes.

These manipulated plotlines were due to the recent sexual assault allegations between members Jack Wright and Sienna Mae. The TikTokers had their own storyline in the show where they tried to figure out their growing romantic relationship. However, all footage of Sienna Mae was cut from the show at her team’s request because Mae feared that viewers would dissect all of her interactions on the show. This left empty space in the series, and the producers fabricated the storylines to fill the time.

Hudson decided to leave the Hype House at the end of the series, as he wanted to focus on his music career rather than TikTok. This was the smartest decision for Hudson, as Petrou and other members of the Hype House slandered him for no longer wanting to make TikToks. They repeatedly tried to portray Hudson as a neglectful member who formed a clique with the members of his house. The narrative of the show manipulated Hudson’s “Cheesecake Factory” house into a childish and irresponsible group compared to the serious main house. Other members looked down upon Hudson’s growing sense of individualism. It quickly became clear that Hudson no longer needed nor wanted to be in the Hype House, but the Hype House needed him. In episode one, Petrou stated, “There will always be diehards for Chase that will no longer support the Hype House if he’s not in it. I think that it would damage the brand, so I need to know if Chase is going to be a part of this.”

Lil huddy needs to hit Thomas Petrou with the nasty Nene read: “no one knew YOU until YOU knew me” #hypehouse pic.twitter.com/r12JYTXt3U

Thomas Petrou proves everything that is wrong with the Hype House. He is relying on creators with more fame to assist him and his brand. On his own, Thomas has very little popularity. The most popular members of the Hype House built their own brand and fame separately; whereas, all of Petrou’s fame comes from the Hype House, and his entire brand is being a co-founder of the Hype House. As the Hype House gets smaller and smaller, Petrou is losing his money and popularity. He even states in the series that if the Hype House does not work out, he will go back to the poor life he lived beforehand. The Hype House relies on their brand deal with Bang Energy Drinks to pay their rent. It is even a conflict in the show that no one wants to make ads for the Hype House TikTok page. That brand deal is the only thing holding the Hype House together. Petrou needs to realize that disbandment before the house falls apart may be the only way to save himself from being left behind by the others.

Petrou is continually trying to bring new, popular TikTokers into the Hype House to revive the brand. However, his efforts are failing. Vinnie Hacker, who is the most popular TikToker in the house now that Hudson has left, stated in the show that he did not truly like making his “thirst trap” TikToks and many of his fans were disappointed to see him join the Hype House. Petrou’s desperate search for new talent has proved futile as even original members are leaving the house. It is revealed at the very end of the series that original members Alex Warren and Kouvr Annon have moved into their own house with over half of the members of the house, which helps build their own brands separately from the Hype House.

Sophomore Mary Martha Holland said, “I actually really enjoyed [the Hype House show] mostly because of how many times Vinnie Hacker appeared in it… I thought it was very interesting just because of how cringey their brand is, but it was cool to see the behind the scenes of the Hype House and what they do and their drama.”

Many TikTok content houses arose in early 2020 after the Hype House grew in popularity. The concept of content houses was already common for Youtube creators, and they also followed the trend of falling apart. Petrou was a former member of popular Youtube content house Team10, which broke up due to toxicity in the house. Many TikTok houses were created and disbanded, including the popular Sway House and the all-girl Not a Content House. These content houses were a breeding ground for drama and clashing friends. These disagreements were often the main cause for house disbandments. The second most common reason was the growth in popularity of the individual members. Each member found their own brand and this caused disjointedness among the houses. Petrou boasts that the Hype House is the only TikTok content house to survive. This is because other content houses were built up of already established TikTokers who had their own fame and fanbases. The Hype House is different because they only have one to two popular TikTokers and the rest of the members are relying on the Hype House brand. Even so, their time to disband seems to be coming soon.

The show itself provided some basic reality TV plotlines with relationship drama and exaggerated arguments. However, the show failed to build a successful emotional plotline. Characters such as Warren, Petrou, and Mia Hayward, shared insight into the tough relationships they had with their families. Instead of showing their growth and how they dealt with these issues, they continuously blamed all of their problems and actions on the trauma they had from childhood.

One of the members who received the largest amount of criticism was Petrou’s girlfriend, Mia Hayward. Hayward spoke out about many members of the house, oftentimes criticizing them and speaking in an unnecessarily aggressive way. She carried herself in a very entitled manner even though she was not really a member of the Hype House. She would order around other members simply because she was Petrou’s girlfriend. All of her actions came to a head when she finally addressed her aggressive and blunt way of speaking after an argument with Larray. However, instead of taking responsibility for how she may have hurt others, Hayward placed all the blame on her abusive father and strenuous childhood. Hayward’s storyline did little to make her seem like a nicer person. Many fans commented on Mia’s continuously rude behavior.

Lacey Simon (‘23) said “Mia, Thomas’ girlfriend, I thought she was nice, but in the show she came off rude, and I just didn’t expect that from her because in her TikToks she seems nice.”

Warren and Petrou both go through journeys to confront their relationships with their fathers. These “journeys” were put so aggressively into the storyline that it became difficult to feel sympathy for them. Each time Petrou was faced with a challenge or disagreement, he would claim that he acted in such a way because of his strenuous relationship with his family. While they did go through very difficult experiences with their families, they relied too heavily on the struggles to justify their actions.

Watched #hypehouse on Netflix out of boredom and if I ever see Mia in public I will punch her she is so annoying and the reason people want to leave it Thomas needs to realize his girlfriend needs to go.

The Hype House show constantly brought to mind the question of why these people have fame in the first place. None of them seem to have a particular talent or star quality, and they continually complain about the work that comes with their popularity. The series relies on Larray and Nikita — who became popular from Youtube, not TikTok — to add humor and interesting plotlines. TikTok users continually comment on the trend of giving popularity to basic, conventionally attractive people rather than creators who make creative content that takes effort. The Hype House show features these bland creators as its main characters. Their lack of creativity is clearly displayed as the members struggle to make simple videos for ads. The Hype House reality show exemplifies the need to give influence to people who will use it for good and make continually interesting content.

“I know this is a new career path for people, but the amount of money and influence these people have at such a young age with seemingly no boundaries, is alarming. Perhaps the best thing that came of this introduction was that I learned who Lil Huddy is and have since taken on the name of Lil Smoses so I, too, can feel cool!” said English teacher Sara Moses.