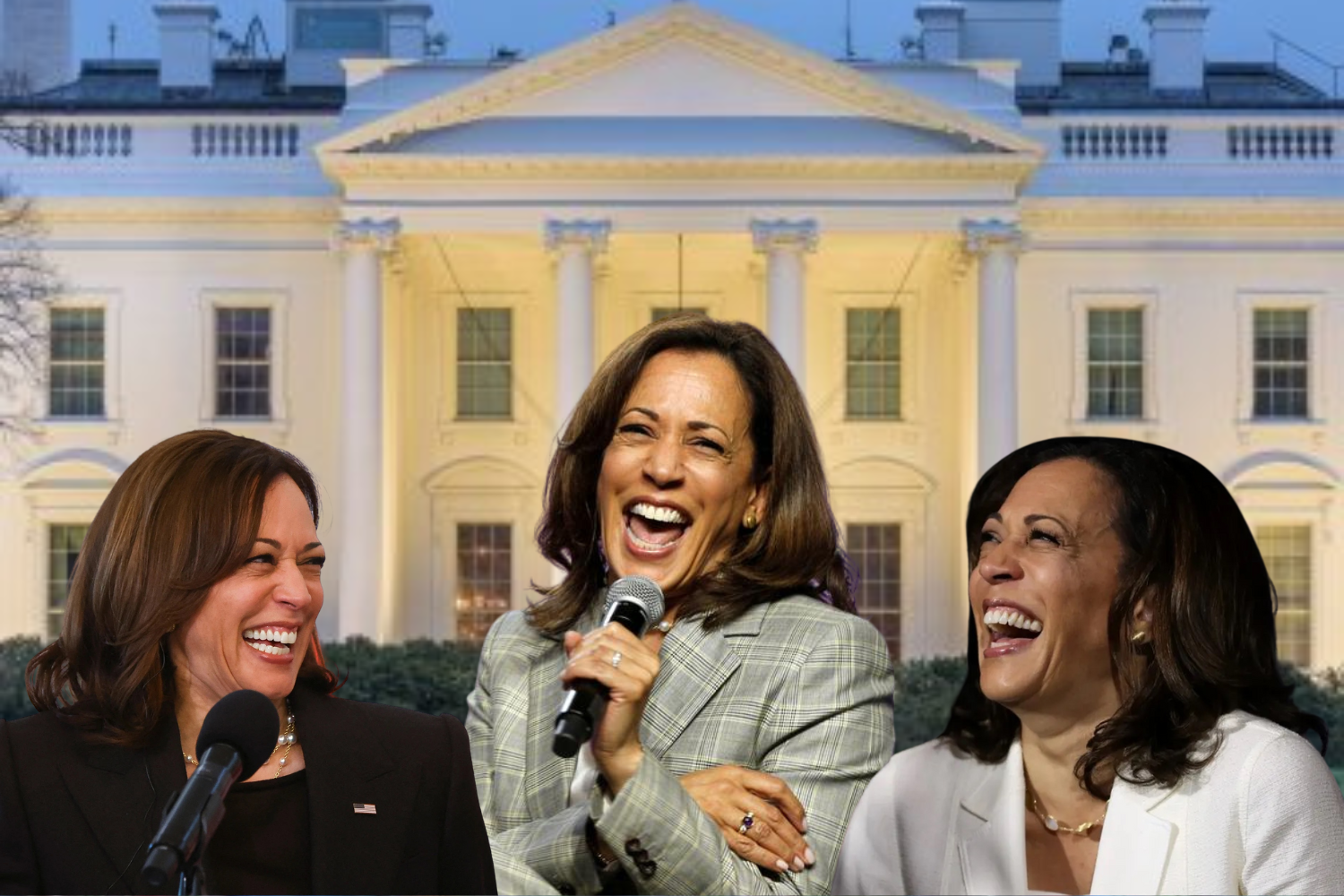 Vice President Kamala Harris is known for loving to laugh, but this could all be part of political strategy. (Photo Credit: Olivia Payne/Achona Online/Canva)

Vice President Kamala Harris is known for loving to laugh, but this could all be part of political strategy.

In 2021, Kamala Harris was sworn in as Vice President to Joe Biden. She was the first woman, Black person, and Asian American to do so. Her inauguration seemed like a victory for all women and people of color who hoped to be better represented in the government. However, even before she was sworn in, Kamala Harris’s public image became associated with frivolous, off-hand phrases. For example, almost immediately after the election, she became known for a trending meme. “We did it Joe!” was all anyone could hear when talking about the new vice-president-elect. Even now, two years into her term, Harris is known for her jokes and laughing memes, not for her political savvy, agenda or policies.

“We did it Joe” was just the beginning of the funny phrases that Harris would become known for. When asked about Harris, young people will most likely reference her style of dancing or consistent silk press. Many videos have circulated of Harris laughing at things that aren’t necessarily funny, such as gravy or a bus. On social media, she is portrayed as a very friendly person who likes to laugh. She is always seen with a smile on her face. This isn’t odd for politicians because they want to maintain a good public appearance and gain approval. However, for Harris, this is a large part of her entire brand.

im willing to bet you couldn’t compile a compilation of any other politicians laughing this hard and this much pic.twitter.com/3qzaxFb3Dn

Is Harris’s light-hearted portrayal intentional in order to defuse the criticism headed her way as a high profile, minority leader? Or part of a smear campaign to diminish her political standing? While some could argue that Harris is simply a person who likes to laugh, there may be more to it than that. The media can be very harsh to politicians, and the threat is much higher for a woman of color in a high position of power. Harris has managed to somewhat fly under the radar and avoid harsh criticisms. The media tends to paint women in positions of power as angry or overly emotional. Harris’ laughter is a way to combat this damaging stereotype. It’s hard for the opposition to villainize Harris when the trending video of her is a humorous one where she’s explaining how much she loves Venn diagrams and the intersecting circles.

“I’ve seen clips of her dancing on social media and I think it’s pretty funny. I don’t think she’s needs to be laughing as hard as she does though,” said Sofia Bailey (’24).

The image that Harris has given herself also aligns with the views of her party. The Democratic Party is mostly perceived as a progressive party, and they try to relate with young people. By giving Harris this bubbly, silly image, she’s more welcoming to young people looking for examples of party members. This works to combat the not-so-young image that President Biden has as he recently turned 80. Harris is 58, which by current politician standards, is pretty young. Trending on social media for laughing about nothing funny in particular and dancing supports the image that they want to portray. Social media is where the young people are, and trending videos like Harris’s will get their attention.

i wanna be kamala harris when i grow up, just get my hair done & laugh.

Harris’ image in the media almost overshadows the things that she’s done as a vice president. People who aren’t very involved in politics will really know nothing about what Harris does. In her two years of vice presidency, she’s made very few big headlines. Staying out of the big headlines could be a good thing for Harris. She has a lot of responsibility as she carries a lot of firsts for her position. It’s the public’s first chance to see that a woman, specifically a woman of color, could successfully hold such a powerful position in America. Making minimal waves could be beneficial to the way people will receive other women and people of color in the future.

Emma Kaiser (’24) said, “I think she’s hilarious. I don’t really keep up with politics but I’ve seen her laughing and stuff.”

However, this image could be detrimental to Harris in the long run. People online generally don’t take Harris that seriously. She’s known for laughing at nothing, even in situations where laughing may not be deemed appropriate. Harris laughed right after swearing-in Los Angeles’s new mayor, Karen Bass. People who noticed found this odd and not very respectful. While it may have just been joy to see the first woman elected to be mayor of Los Angeles, it definitely came across wrong to many viewers. This side of her image means that people may not believe that she is serious or competent enough to do her job correctly.

what has kamala harris done besides laugh

Harris still has two more years of her term, and she still has time to prove herself or create more controversy. She has a lot of responsibility in her position, and a lot of people are relying on her to make a good impression on the American public. Whether her continuous cackling is doing a good job of that is still to be seen. While she may not have a great impression in politics, her laughing and dancing has definitely become iconic on social media.