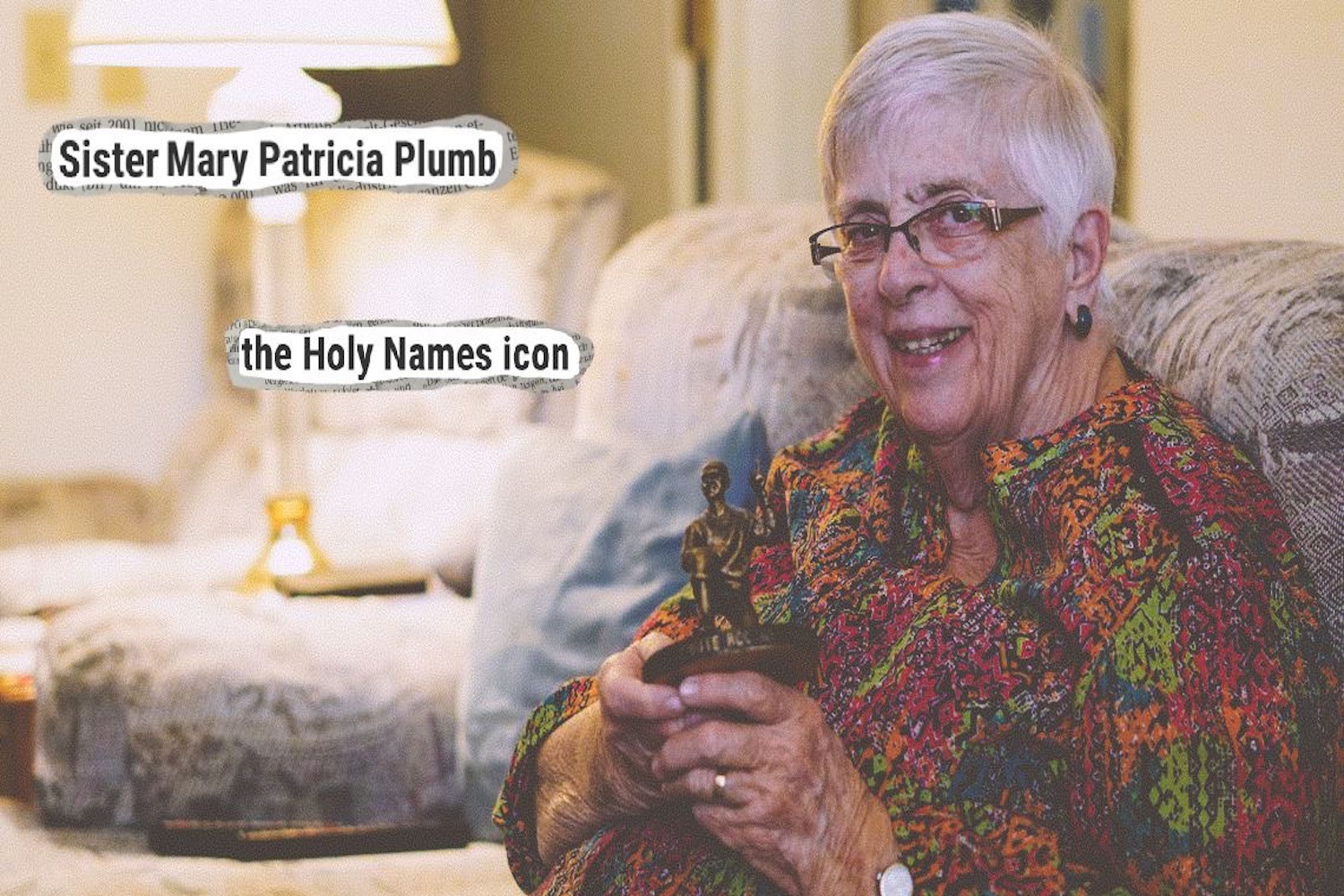 A devoted supporter of Notre Dame’s Fighting Irish, Plumb is pictured with a statue of renowned Coach Knute Rockne.

“It is with the heaviest hearts that we announce Sister Mary Patricia Plumb, SNJM A’55 completed her earthly journey this evening,” wrote President Art Raimo in an email to the student body Friday, Jan. 8.

Known to many as SMPP, Plumb was most often deemed the embodiment of the Holy Names— her relationship with AHN spanning several decades in which she was both a student and member of faculty.

While Plumb is no longer here with us, she will forever remain within the hearts of all those she touched. On behalf of my peers, I’d like to thank SMPP for her countless years of compassion, generosity, and dedication. Regardless of our doubts, her faith in us, her students, never ceased to waver. I only wish to possess an eighth as much spirit.

Below are the cherished memories of several of Plumb’s former students:

My heart hurts learning that Sister Mary Patricia Plumb is no longer with us. I am so grateful she was in my life. She was a great mentor. She called my bluff at times and helped center me. She had a great sense of humor. And she gave incredible advice to many of us. For me, it was simply, “Will this really matter next week, next month, next year?” I have carried that litmus test with me always. I will never forget ditching part of senior retreat, her finding a friend outside, and me. Instead of scolding us, she decided to lay in the grass, looking up at the stars with us. I felt a higher power with her that night. I carry that connection now too. Thank you, SMPP, for all you gave us.

Outside my family, Sister Mary Patricia Plumb had the biggest impact on who I am today. She truly was an amazing woman. She always encouraged her students to go outside of their comfort zones. She challenged me not to just dream big but do big. She lived our school’s motto— To Be Rather Than To Seem— daily, and more importantly, she has encouraged me and so many others to do the same.

I have so many fond memories of Sister, but by far, some of my most favorite memories were from road trips for speech and debate competitions. By far one of the funniest memories I recall was when Sister was driving one of the Academy vans to a tournament. As she was exiting the interstate via the exit ramp, she realized she had gotten off the wrong exit. She immediately stopped the van and proceeded to back up onto the interstate. As all of us in the van were in shock, Sister responded, “Don’t worry, God is on my side.”

Although there is a hole in my heart as I come to grips with the fact that Sister is no longer with us, I am comforted in knowing that there will always be a part of Sister with me. Sister Mary Patricia Plumb may be gone, but she will never be forgotten.

I first met Sister when my mom started teaching at AHN about 40 years ago. She and the other Sisters have always been a combination of grandmother, mentor, and teacher to me. My whole freshman year, Sister tried to get me to join NFL (National Forensics League), and I kept telling her not until 10th grade. As a sophomore, I did join. [By] junior year, I was one-fourth of the first Policy debaters. Even though we had very little clue what we were doing, for our very first tournament, Sister put us into Varsity at the Blue Key Invitational at UF. We were up against many of the top teams in the nation. It didn’t matter that we lost every round; we learned in a way we never could otherwise. In college at USF, I was a student member of the Faculty Senate. In grad school, I presented papers at conferences. I never would have had the confidence without NFL and Sister. From 1999 until 2014, I was a teacher at DC public and public charter schools. One of the first things I did was start a speech and debate team. I coached 2 students, then 4, then 6. They competed in CFL in Congress, Extemp, Prose & Poetry, and Original Oratory while I judged. Despite having to overcome racial prejudice from judges and other competitors, they won. I took two of them to Nationals in Pittsburgh and got to spend time with Sister at Nationals as a fellow coach.

Sister Mary Patricia empowered me to find my confidence and my voice. To me, part of her legacy is what I passed on to my students and what they are passing on to others. All of this because Sister Mary Patricia insisted I joined NFL and would not take no for an answer. She knew it was what I needed to become the person I am now. Even the last time I saw her, she was telling me she was proud of me and was encouraging me.

My favorite teacher, Sister Mary Patricia Plumb, taught me when I attended Boys Academy of the Holy Names from fifth through eighth grade. Sister Jane Francis, as she was called back then, also taught my daughters and knew my granddaughter Isabella Schellman at AHN. Patsy was the closest person to being a Saint as I’ve ever known. Sister, you taught and gave me confidence, understanding, love, kindness, compassion, strong faith, and to be grateful for every day I wake. Thank you. I love you, Sister Mary Patricia Plumb.

I was thinking about joining forensics, but I was nervous. She told me, “a woman should never be afraid to share her voice.” I never joined, but her message stuck with me. She was awesome.

My sisters and I were so blessed to have SMPP not only coaching us in speech and debate but in life. From road trips across the country to long talks sitting on the floor in her office, time with SMPP was precious. No topic was off-limits. Her advice was always on point. More like an honored family member than a coach, her loving, joyful legacy lives on in all of us.

It’s been on my heart for days to think of just the right words to express what you meant to me. But even after a few days, words are not enough. So I will share feelings.

I first met you through NFL. My very first competition, you thought I should do oratory and had me memorize a speech. I showed up at Jesuit High School and did the oratory and somehow won. I then went on to a CFL competition in Sarasota and qualified for CFL Nationals in Buffalo, NY and had my first road trip with you. You made me feel so competent and important and able to do anything I put my mind to.

We went the following year to New Orleans and a myriad of trips around the state together in the coming years. You had amazing patience and energy to drive a bus of pubescent, high-pitched screaming women with interesting music choices— I don’t know how you did it! For that alone I will petition your sainthood.

One of the funniest memories I have of you was doing Model United Nations at USF my Freshman year. I was assigned to South Africa. It was a horrible time in that nation’s history with apartheid, violence, segregation and the list goes on and on…. What was your suggestion? Tourism! You brought in travel brochures (no idea where you found them) and had me walk up and introduce myself to the assembly and offer tourist opportunities to my great country of South Africa to take in all the natural beauty. OMG, it was hilarious!! Only you would have thought of that angle in the midst of apartheid and civil unrest. But it worked. You gave me more confidence to find the silver lining in difficult situations and humor when things got tough.

The most important thing you ever did for me was offer me tough love and the gift of your time. My mom died when I was 16, and it was such a horrific time for me. I had too much time on my hands and grief in my heart, but you kept me involved and engaged in NFL. I was signed up for an original oratory, but I wasn’t getting around to writing it. I must have had every excuse in the book, and time was running out. You challenged me to write about my mom and my feelings. I just couldn’t. So one day after school you had me stay behind, and we went into one of the science rooms with your typewriter and a pile of paper, and you sat down with me and helped me put my feelings on paper. It was gut-wrenching, and I never would have written that without you. It took us hours!! And this was not the days of word processors or spellcheck or typewriters with built-in correction tape. This was OLD-SCHOOL typewriting with correction rectangles you add in to strike out the word or letter to remove. There were piles of wadded up paper around us as we struggled through the exercise. Your tenacity made it happen. I kept wanting to give up, but you wouldn’t let me. The following week I competed with that oratory. I never placed with it that I recall. But no prize was needed. The reward was that all the complicated feelings I had relating to my mom and losing her and feeling lost got sorted out onto paper, and that was the greatest gift you gave me.

Through the years, when I returned to AHN for reunions or visits to see my family, it was you I couldn’t wait to see and be reunited with. Thanks to Facebook, you kept up with all my endeavors, made comments and likes, and stayed engaged with me. Even though it’s been over 30 years since high school, it feels like our bond never broke.

Thank you for being a gift to young women throughout your ministry. Thank you for continuing to be a gift in your death as we are all getting an opportunity to reconnect and share our memories of you together. You were not just any ordinary nun. You showed us your very personal relationship with Jesus and the Blessed Virgin and were the perfect role model. You kept it real! The song that keeps running through my mind this week is one from our days in high school that really epitomizes how I feel about you. It’s Depeche Mode’s, “Personal Jesus” that came out in 1989. The line, ‘Reach out, Touch Faith’ just makes me think of you. You were the flesh and blood ‘personal Jesus’ in our lives. You showed the love of Christ in all you did for us, and I thank you.

Thank you for humor, for love, for giving me the swift kick in my tail when I needed it, and for being real. I love you and I’m so grateful I became part of your legacy. Until we meet again.

May you rest in peace, Sister.