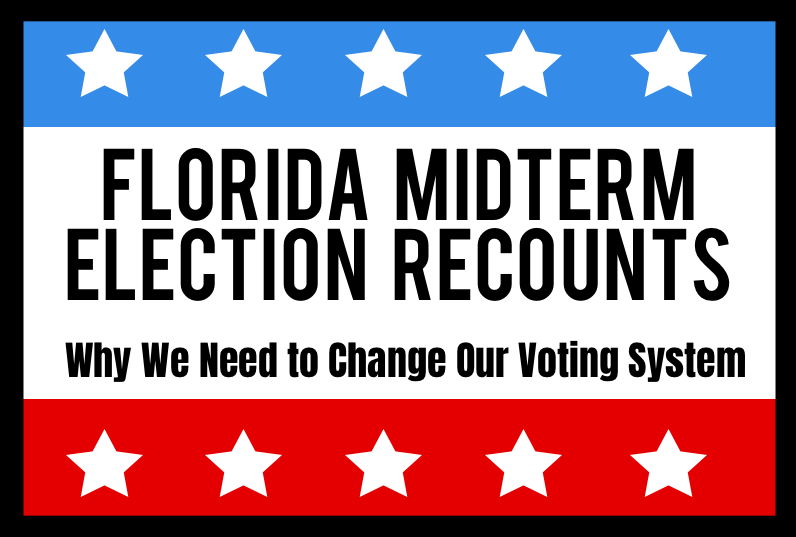 An estimated 38,593 undervotes were found statewide in the Florida Senate race.

The current recounts in Florida’s midterm elections have shown the desperate need for improvement to America’s voting systems.

On Thursday, November 15, after Florida’s hectic recount for the key midterm election races was finally finished, there were extremely slim margins between the two candidates for both governor and senate. The race for governor occurred between Republican Ron Desantis and Democrat Andrew Gillum, and the race for senate occurred between Republican Rick Scott and Democrat Bill Nelson.

DeSantis beat his opponent Gillum by 0.41 percent, avoiding the next round of recounts. As of late Friday night, Gillam had yet to concede defeat. Scott maintained his narrow lead over Nelson by 12,603 votes or 0.15 percent. However, the less than 0.25 percent margin prompted Ken Detzner, Florida Secretary of State, to order a hand recount of all Florida ballots for the senate. Democrats hope this hand recount will uncover enough ballets to push Nelson to a win.

While the recount has caused major controversy on both a state and national level, the issues have also been prominent in the halls of Academy

Audrey Gabbard (‘19) is in favor of the recount. Gabbard says, “I believe that the Florida recounts are absolutely necessary because all votes should be accounted for.”

Throughout the Thursday recount, chaos allowed various mistakes to occur and thousands of votes to remain uncounted. Therefore, in 2018, we must send a message to our nation as a whole that we must do better if we hope to live up to the American ideal of a free society. 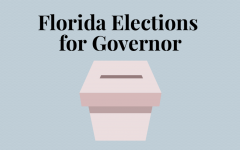 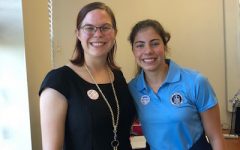 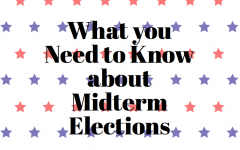 Incredibly, Broward County alone had an estimated 23,000 votes that were rejected due to inaccuracies in signatures or other errors. The heavily Democratic county submitted their recount results two minutes after the state deadline. Due to this, state officials refused to accept the newly counted votes. A simple two minute delay by bureaucratic officials had essentially disenfranchised these citizens, rendering them silent in the democratic process.

Additionally, while 25,000 ballots in the county showed votes cast in the race for governor, the same ballots showed no vote in the crucial Senate race. Some are blaming an unusual and confusing ballot design where the vote for governor was placed in the bottom left corner of the first page. Others suggest that the lack of votes may be due to machine error. Regardless of the actual reason, more votes were lost.

Like Broward County, Hillsborough County also had issues delivering its recounts on time. The office where votes were being counted had two power outages occur during Thursday’s recount.  Possibly due to the temporary loss of power, various discrepancies appeared in new totals. One such result listed 846 fewer votes than those originally cast on election night. Because county officials could not rely on the machines after the electrical problems, Hillsborough failed to do the legally mandated recount.

In Palm Beach County, voting machines completely broke. Authorities reported that a significant number of votes in the recount were missing, thus making it impossible for the Thursday deadline to be met. Again, the legally mandated recount was not completed.

Broward County is the second most populated county in the state, Palm Beach county is the third, and Hillsborough county is the fourth. All three counties let their original vote from election night stand. Voters in each of these counties did not have the reassurance that state law was supposed to provide.

We need to change the current voting system. In order for us to be a true Democracy, every vote must be counted. We need to focus on the voters themselves rather than pointless deadlines.

Lawyers from both parties attempted to file new lawsuits, hoping to challenge and change results of the recount.

When addressed by lawyers, Federal District Court Judge Mark E. Walker said, “We have been the laughingstock of the world, election after election…Yet we still chose not to fix it.”

Walker brings up an important issue. Time and time again across America we have seen voting complications arise. However, local, state, and national leaders have made no effort to correct or prevent these occurrences. We follow an outdated voting system. Why?

As the Thursday pandemonium continued, things got worse as unsupported accusations began to fly. Although the Senate campaign has yet to be decided, Scott has announced his victory multiple times. Thursday he spoke at a press conference and accused Palm Beach County and Broward County of fraud.

Many at Academy see the point in which Scott is coming from. Some students and voters fear the issue.

“Voter fraud is definitely a problem through the lack of security. I have heard many stories about ballots being left open in the polling stations after the administrators had already left, thus allowing anyone to tamper with the votes,” says Gabbard.

While Scott’s accusations may be valid in his eyes, they seem to make little sense. Scott is still the current acting governor of Florida. He is the one who is overhead of both state and local officials. If Scott truly fears this “prominent voter fraud,” why has he done nothing himself to fix it? Why does he have no evidence this fraud is occurring? Governor Scott is the one in charge.

Scott is certainly not the first politician to claim Florida’s Democrats are guilty of voter fraud. President Trump started off his Thursday morning notoriously tweeting.

Trump said, “When will Bill Nelson concede in Florida?” and, “The characters running Broward and Palm Beach voting will not be able to ‘find’ enough votes, too much spotlight on them now!”

When will Bill Nelson concede in Florida? The characters running Broward and Palm Beach voting will not be able to “find” enough votes, too much spotlight on them now!

Earlier in the week, on Tuesday, November 13, Trump went as far as attempting to intervene in Florida’s legally mandated vote recount.

“I don’t think anyone should be upset with the recount because no matter what it will be the truthful vote. Wouldn’t you rather have the true verdict of what the state wanted as a whole?” says Sam Cuttle (‘20).

Despite the claims, both the Florida State Elections Department and the Florida Department of Law Enforcement said they have seen no evidence of voter fraud. Both of these departments are run by Republican officials.

Gillum has attempted to respond to Republican politicians by arguing there is no voter fraud, but voter disenfranchisement.

Democratic Minority Leader of the Senate Chuck Schumer added to the conversation.

In response to Trump’s tweets, Schumer said,  “It’s just plain wrong. It’s un-American. If he really wants an honest and fair election, President Trump will stop bullying, harassing, and lying about the vote in Florida, and let the election proceed without the heavy hand of the president tipping the scale of justice.”

Despite partisan backlash, Trump continues to openly rant about “rigged elections.” These statements undermine confidence both inside the United States and in the eyes watching throughout the world. Everyone is losing trust and respect for America’s voting system.

The Florida Election should be called in favor of Rick Scott and Ron DeSantis in that large numbers of new ballots showed up out of nowhere, and many ballots are missing or forged. An honest vote count is no longer possible-ballots massively infected. Must go with Election Night!

The political divide in present day America is deep. The red rural areas and the blue urban centers continue to grow apart in paritson ideologies. It is past time to find common ground. We cannot attempt to fix these issues without the basic building block of truth in voting. The democratic process begins with and is centered upon free and fair elections.

Sunday at 12:00 p.m. marks a deadline for counties to submit results of the hand recount for Florida senate. The state canvassing board is required to certify the election by 9:00 a.m. Tuesday morning.

“I am very excited for the results of the recounts because I heard that a lot of inmail votes were actually not counted. It is unjust and unfair. People deserve to have their voice heard. Voting is a big way to give people the chance to make a difference. It is unfair that the right was taken from them,” says Sahar Bueno-Abdala (’21). 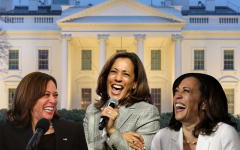