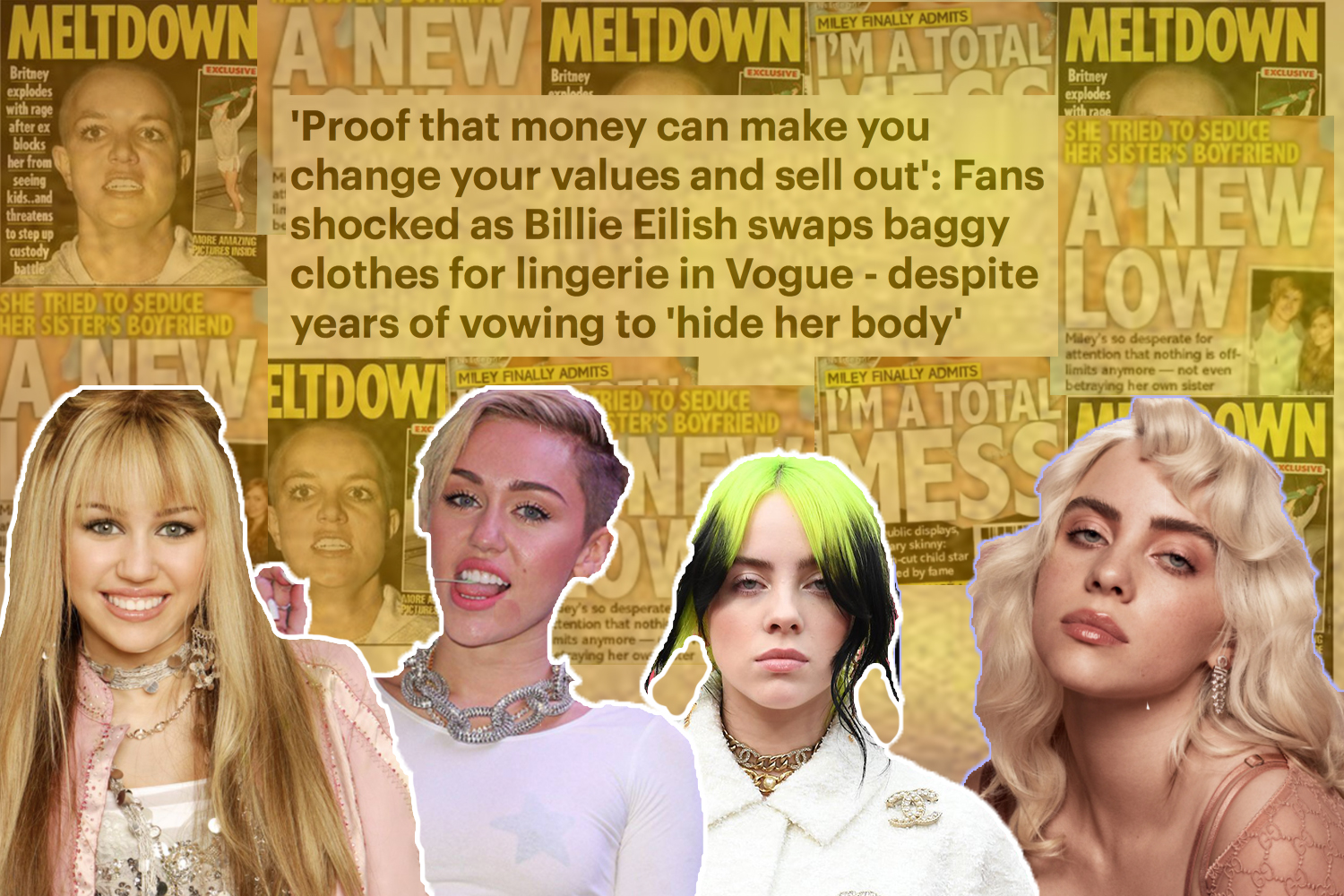 Miley Cyrus’ famous transition into her adult career at the MTV VIdeo Music Awards in 2013 sent the internet ablaze, with people tweeting 306,100 tweets per minute during the performance. (Photo Credit: Isabel Bequer/AchonaOnline)

Miley Cyrus’ famous transition into her adult career at the MTV VIdeo Music Awards in 2013 sent the internet ablaze, with people tweeting 306,100 tweets per minute during the performance.

Billie Eilish recently appeared on the cover of British Vogue, sparking online conversations. However, the conversation was not typically what one would expect from a magazine cover. Rather than discussing whether she looked stylish or not, people online and even professional publications were expressing shock at Eilish’s decision to appear in revealing clothing.

Eilish is notorious for her baggy style and her public desire to cover up her body. This was because of her wish to not be sexualized, as she felt that showing her body opened her up to objectification from the public. As such, people online and the Daily Mail, a popular tabloid, were calling her a hypocrite, saying that if she did not want to be sexualized, she should have continued to cover her body. Eilish responded saying that she had done this in the past because she had been a child at the time.

“I think that the claims of her being a hypocrite were definitely unwarranted because she’s promoting body and image and being proud of her body. She was just trying to show she was proud of her body and that other people should be too,” said Kate Petitt (’23).

This cover could be a large step in Eilish’s career – a step from childhood to adulthood, as she begins to take more control of her public image through her outward appearance. However, the backlash from this cover may reveal that Eilish will have some trouble making this transition, as the public refuses to let her grow up.

This is a frequent occurrence with female stars. When they seek to change public image, they tend to do it with a dramatic event that represents a turn from their previous persona. These changes are then met with scrutiny and backlash from the public, saying they preferred their previous persona. These changes are also frequently seen as attempts to grow up from a more innocent and youthful appearance to something that better suits their age.

Often, this bumpy transition to adulthood is seen in the careers of child stars who appeared in media geared towards children, such as Disney or Nickelodeon shows. A controversial example is Miley Cyrus making her career transition after “Hannah Montana.” The show and character of Hannah had taken up Cyrus’ entire life and become her entire brand. After the show ended, Cyrus had originally planned to focus on her acting career, appearing in more mature movies such as “LOL” and “So Undercover,” both rated PG-13. However, the true controversy came with the revival of her musical career, starting with the 2013 MTV Music Video Awards. Cyrus performed with Robin Thicke, making suggestive gestures and “twerking” during it. After, the media and public was ablaze with criticisms, with the Federal Communications Commission receiving over 150 complaints about that performance alone, saying they did not want to see such an explicit performance on television.

Have anyone else notice that child stars that have ties to disney end up having some serious issues growing up, not sure if its disney being particularly toxic or if it’s just that they have more child stars and the media industry is just generally toxic

Cyrus’ controversy continued with the release and promotion of her 2013 album “Bangerz.” The release of her music video for the song “Wrecking Ball,” sparked conversation and amassed over 1 million views. While her new provocative persona may have been controversial already, it was exacerbated by her former child stardom and innocent appearance. And while Cyrus faced controversy, she had almost completely separated herself from the character of Hannah Montana, showing how the change was successful, albeit at a price. Additionally, Cyrus was 21 at the time, meaning she was fully an adult and should have been allowed to have control over her body. The idea that she was crazy or having a breakdown that was perpetuated by the media was truly just Cyrus taking control over herself and her image.

Both Eilish and Cyrus were taking control of their own image and deciding that they felt comfortable wearing more revealing clothing and discussing more adult themes. They were no longer minors, and these changes are parts of their journey to their adult careers, separating themselves from childhood. Their decision to do these things may have been an attempt at empowerment, since as minors they faced sexualization from the public.

“[Eilish] is perfectly allowed to changer her mind about her body and what she wears. She’s a human being who has body autonomy to wear what she wants. Same with Miley Cyrus. She wanted a complete makeover after Disney so she completely rewrote her image and people thought she was crazy but she was just embracing herself and showing what she wanted to show,” said Catalina Salgado (‘24).

Restricting female artists and their ability to control their identity can be harmful. Britney Spears mental health issues were largely contributed to by her relationship with the media and her not being allowed to have control over her image as a young girl. Famously, this led to her assaulting the paparazzi’s equipment with an umbrella. This led to her stay at a psychiatric hospital and the birth of her conservatorship, a legal situation that prohibited her from having control over legal status and finances. This sparked the #FreeBritney movement, where people were demanding Britney gain control over her image and finances.

People are so willing to fight for women to be allowed to have control over themselves, but when they express this control, it sparks controversy and negative attention onto the artist. It also detracts from their actual art and careers. For example, Billie Eilish used her Vogue interview to talk about body image and the poor treatment of young women within the industry. However, in an ironic twist all people could talk about was her body and not her actual sentiment.

I hope people actually take time to read what Billie Eilish said in the Vogue interview and not solely fixate on the photoshoot. She brought an important perspective on body image for young women and how being comfortable in your own skin comes first.

These radical changes come as a result of the pressures of fame as a young women. It is a way to reclaim identity in an industry that is constantly trying to define women and put them into more marketable boxes. By shedding previous personas, it allows for growth and can prevent burnout and other issues caused by restrictive identities, such as seen in Spears’ reaction to the media.

“Women in music often have a pressure on them to meet a certain image the public sees. I think that them taking control of their own image is really important because if not their entire careers could be controlled by someone else,” said Salgado.